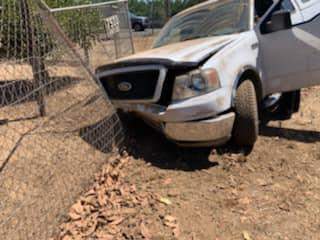 STOCKTON – A motorist driving a pickup truck with just three wheels led deputies on a wild chase Saturday afternoon through east Stockton, starting multiple fires, rear-ending an occupied vehicle and eventually crashing into a fence before he was compelled to get out of his truck by a police dog and arrested, the San Joaquin County Sheriff’s Office reported.

Among the charges Uriel Delossantos, 37, faces are suspicion of driving under the influence, hit-and-run, property damage, resisting arrest, reckless driving, evading with wanton disregard for safety, providing false identification and property damage, according to the Sheriff’s Office.

Delossantos was first spotted by a deputy about 1:30 p.m. on the Fourth of July heading eastbound on Waterloo Road, just west of Highway 99. What caught the deputy’s attention at first was that the white Ford F-150 pickup Delossantos was driving had no right front wheel.

The brake rotor was scraping on the pavement, sending out sparks, and as the Ford passed the deputy it sped up, nearly side-swiping his patrol car, according to the report.

When the deputy attempted to pull Delossantos over, he allegedly did not yield and instead drove faster over the freeway overpass until he crashed into the rear of a Chevrolet truck stopped for a traffic light.

Other deputies arrived to help the first deputy make a felony car stop. At this point, the driver of the Chevrolet – concerned for the safety of his 6-year-old son in the back seat – pulled forward to get to a safe location. Neither was reported injured.

As deputies approached Delossantos, he looked to his left, flashed them a peace sign, smiled and continued driving eastbound on Waterloo/Highway 88. The pursuit was on again, with speeds reaching 80 miles per hour as Delossantos headed into the country, according to the report.

As Delossantos kept driving on three wheels, the brake rotor on the right front continued to spark, initiating several fires in dry, grassy areas along Highway 88. While negotiating a curve near the Waterloo Restaurant at Comstock Road, the Ford left the roadway and crashed into a fence where it came to rest.

According to the Sheriff’s Office, Delossantos continued to defy commands from deputies so K-9 Admiral was deployed to assist him out of the pickup truck. It was not reported if Delossantos was injured in that encounter, but he was taken to an area hospital for medical clearance before he was transported and booked into San Joaquin County Jail.

At the final crash scene – 5.4 miles from where it began – the disabled pickup caused one last blaze, this one a large grass fire that overtook an entire lot at the southeast corner of Highway 88 and Comstock Road. Firefighters with the Waterloo-Morada Fire District were able to stop the fire in time before it spread to neighboring homes.

The California Highway Patrol also responded to the incident, investigating the collisions and evaluating Delossantos for alleged driving under the influence.

Ford Trucks Outsell GM, FCA And All Other Rivals In Q2...