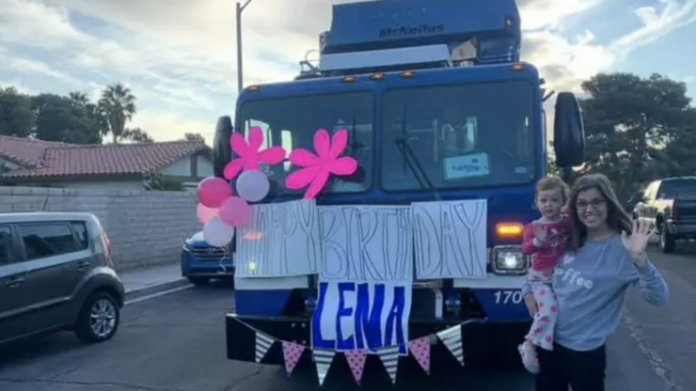 A 3-year-old child who befriended her neighborhood sanitation workers got a surprise birthday parade from them during the coronavirus pandemic. Lena Riley received the parade on April 18 with a fleet of seven trucks that were decorated in birthday gear in Nevada.

Leslie Riley, her other, told “Good Morning America” that she and her daughter began getting the workers with baked goods after Lena would watch them from her window.

“If she hears the truck outside and we don’t have something to feed them with, she’ll start to cry and say, ‘We have to feed the blue trucks!'” Riley said to “GMA.” “We’ve gotten to know them very well.”

Riley said a family friend helped to organize the birthday parade for her daughter. They came decorated with flowers and the workers even gave Lena a swag bag filled with coloring books, a hat and coffee mug.

“It’s good to see a community coming together during a time like this,” Riley said of the current pandemic. “It was just the sweetest. Every truck that came around the corner, [I had] more tears.”

Opinion | ‘Dead Inside’: The Morgue Trucks of New York City