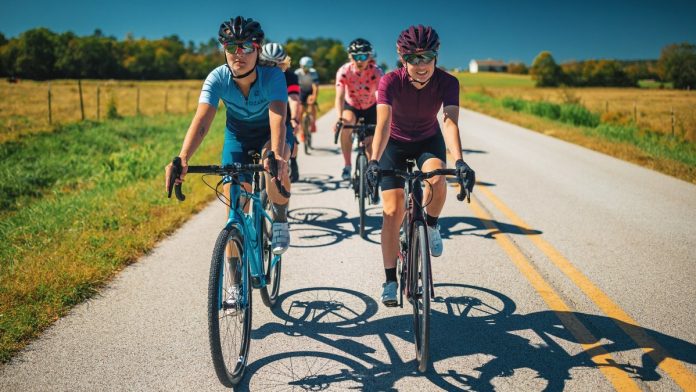 It’s a weird and wonderful time in the world of road bikes. Brands have transitioned away from designing them solely for the highly specialized needs of professional road racers and are now putting a refreshing emphasis on creating steeds that can be confidently ridden on a variety of mixed surfaces roughly defined as roads.

Yes, there are still plenty of race-bred road bikes on the market—and we tested a few of the best this year—but the rise of gravel and adventure cycling has stolen the thunder from the pro peloton. The result is an explosion of creativity and scope in what had been a stagnant category defined by the demands of the UCI and the 1 percent of riders who race in the upper echelons of the sport.

This year’s road test in northwestern Arkansas covered the aforementioned traditional racers but broke from the pack with a large number drop-bar models designed for endurance as well as gravel grinding. Here’s a look at some of our favorites.

Trek’s endurance road bike, the Domane, was a hit with our testers for its ability to blend efficiency, comfort, and smart frame features.

The Domane’s lightweight carbon body incorporates Trek’s road-smoothing IsoSpeed system. It uses pivots at the headtube and seatstays to create a small but noticeable amount of vertical flex. The company’s goal in developing IsoSpeed was to reduce road vibration without compromising pedaling performance. We’d say it did an excellent job.

One frame feature in particular made the Domane stand out from the pack: the down tube features a removable cover that allows the rider to stow repair essentials and a rainjacket inside the carbon frame.

We also appreciated the Domane’s tire clearance. The 700-by-32-millimeter tubeless tires might not be the right choice for road racing—unless you’re on the cobbled roads of Flanders—but they’re an excellent choice for all-day riding.

The Roubaix is Specialized’s go-fast, go-far endurance road machine. The carbon bike comes with an updated version of the company’s Future Shock suspension system. This steerer-mounted suspension provides 20 millimeters of pothole-absorbing travel, while the rear end uses a combination of seatpost and chainstay flex to give an all-around comfortable ride. When it comes time to stand and mash on the pedals, riders can turn off the suspension system with the twist of a dial mounted above the stem.

The Future Shock suspension system gave our riders an added degree of confidence, especially during speedy descents. One tester felt they could ease off the brakes and take corners faster thanks to the increased traction it provided.

Our testers were also pleased that the Roubaix was able to blend suspension with geometry that’s still in line with racy, performance-oriented roadsters—it’s a comfortable road bike, not a comfort road bike.

The Áspero blurs the line between road and gravel. It has clearance for voluminous 700-by-42-millimeter tires but also features a frame geometry that retains the nimble handling of a road bike.

On the gravel-riding spectrum, the Áspero sits at the racing end, which should come as no surprise given Cervélo’s deep road-race heritage. Given its quick handling nature, the Áspero is better suited to that style of riding than bikepacking adventures.

Several testers noted that it handled so similarly to their traditional road rides that it could eliminate the need for separate road and gravel bikes from their quivers—just swap the wheelset for tarmac or dirt, depending on where the day will take you.

Our team was split on their opinion of the single-chainring drivetrain on the Áspero we tested. Some appreciated its simplicity, while others wished for two chainrings and narrower steps between gears. Thankfully, Cervélo offers builds with both options.

Allied Cycle Works is headquartered in Bentonville, Arkansas, so the Able had something of a home-field advantage during our test. Once we hit the dirt, we realized the name was incredibly apt, as the Able tackled the chunky gravel roads of its backyard in northwest Arkansas with ease. But that’s not the only place it excels: the Able made its debut last summer with men’s and women’s victories at the Dirty Kanza 200.

While this American-made carbon gravel bike might not have been the most aesthetically pleasing of our test, its elevated drive-side chainstay serves a very specific purpose: it allows for short, 420-millimeter chainstays while retaining clearance for ultrawide 700-by-47-millimeter tires. The trade-off is that the Able is only compatible with single-ring drivetrains, which suits some riders better than others.

The nimble handling afforded by the short chainstays combined with the high-volume tires kept the Able feeling more like a rally racer than a monster truck.

You are now subscribed to The Gear Fix

We will not share your email with anyone for any reason.

Get our latest gear stories in your inbox twice a week.