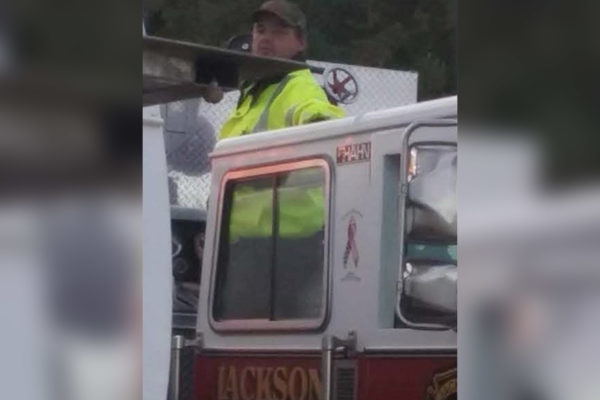 Click here for the latest coronavirus news, which the BDN has made free for the public. You can support our critical reporting on the coronavirus by purchasing a digital subscription or donating directly to the newsroom.

Lt. Harold “Eddie” Moore, Jr. of the Jackson Volunteer Fire Department, had been working hard doing physical labor before he suffered a heart attack at his home and died on Tuesday night.

The Maine Center for Disease Control on Friday listed the 42-year-old Waldo County man as one of the latest — and youngest — victims of the coronavirus in the state.

Nirav Shah, the director of the Maine CDC, said Friday during the agency’s daily press conference public health officials are still looking for close contacts of the firefighter. They’re recommending that they all self-quarantine and get tested if symptoms of the virus develop.

Moore’s wife, a CNA at Tall Pines in Belfast, was one of the employees who tested positive for the disease during an outbreak at the facility. She had gone home to quarantine herself, and Moore had joined her. He was quarantined for almost four weeks, and did have a few mild symptoms of COVID-19 during that time, Nickerson said. He had lost his sense of taste, and smell — both of which are signs of the coronavirus — but that’s it.

Fire Chief Don Nickerson, Sr., who had worked with Moore since the younger man was a 16-year-old junior firefighter, does not think his death had anything to do with COVID-19, the disease caused by the coronavirus. That’s because Moore had suffered only mild symptoms and had felt fine for three or four days before suffering a heart attack, the chief said.

But the fire chief, and four of his best firefighters, will quarantine themselves for 14 days because it’s what the Maine Center for Disease Control has asked them to do.

“I don’t believe that’s why he died,” Nickerson said Friday. “We’ll do what is asked. As good citizens, we’d better do what we’re asked.”

Although Moore’s wife tested positive for the virus, Moore himself was not tested until after his death, according to Nickerson. Still, the mechanic by trade and volunteer firefighter by vocation stayed in quarantine at his home for more than three weeks. While in quarantine, he never went to a fire scene, Nickerson said, even though the department responded to three fire emergencies during that time.

“He never once showed up. He knew the cost would be astronomical if he did infect anybody,” the chief said.

But as the weeks passed, Moore felt like himself again. His wife had been told she could go back to work, and by the beginning of this week, Moore had not had any symptoms at all for three or four days, Nickerson said.

On Monday, he was working hard cutting his firewood, and when the call came in Tuesday that a Jackson residence was burning, Moore responded. At the scene, he ran the pumper, working alone to pick up a hose that weighed as much as 300 pounds, the chief estimated.

Fire departments from other communities responded to the fire, too and worked alongside the Jackson crew. Some of those firefighters are also putting themselves in quarantine.

But Moore was by himself on a pumper, “far from everybody,” the chief said. After they cleared the scene, the firefighters went back to the station and Moore stayed late to tinker with a brush truck that wasn’t working right. After that, he went home, where he collapsed.

“He had an extremely wicked pain in his left arm, and was sweating profusely, according to his wife,” Nickerson said, adding that it was all too familiar.

His own son, who was Moore’s age, died a couple of years ago of a massive heart attack. And so even though Moore did not have a history of cardiac problems, it did not seem surprising that a young, healthy man could have been suddenly struck down in this way.

National trends do show that younger patients with COVID-19 are suffering more heart attacks and strokes. One theory is that it is a result of the body’s immune response to the virus.

The fire department was the first to respond to the emergency cardiac arrest call, Nickerson said. They and the paramedics who came to the house performed CPR on him for more than four hours.

“We went over and above what everybody would have done,” Nickerson said. “It’s kind of daunting to see a young fellow like that, with the department, like one of my kids,” have a heart attack.

The firefighters also had “nowhere near” the amount of personal protective equipment that they would have liked, as it has been hard to obtain the correct gear these days.

“It’s been awful hard for us to get anything,” Nickerson said.

Despite that, he is not scared. He is sad, of course, and he is a little upset that Moore’s death has been connected to COVID-19 — but scared is one thing he isn’t.

“I’m not apprehensive about my condition, and my firefighters aren’t, either,” he said.

“When he would step out to do something, he would put his whole heart in it,” Nickerson said. “As a teenager, he was a little bit cocky. But as he came around, he was a tremendous firefighter. There was nothing he could not fix on the truck. He was an asset.”

Watch: Nirav Shah talks about the situation at Tall Pines