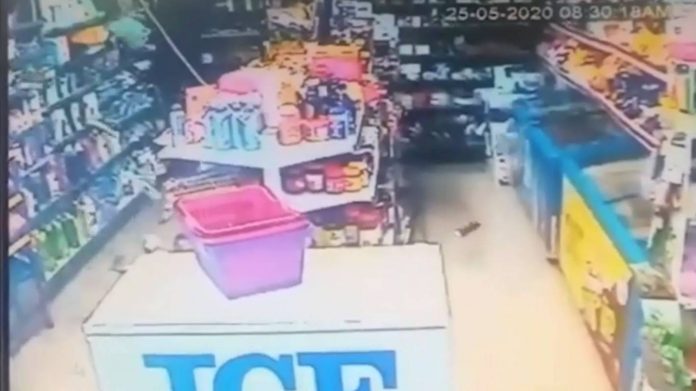 Trains ground to a halt, food fell from shelves, and people ran for doorways as a 5.8-magnitude quake rattled much of New Zealand.

The “strong” quake was centred 37 kilometres deep, 30 km northwest west of Levin at 7.53am on Monday.

* Have you got photos of the quake? Emails newstips@stuff.co.nz

Metlink has warned of significant delays for Wellington commuters as tracks are checked for damage.

Earthquake off the coast of Levin was ” a really good shake” says Horowhenua Mayor Bernie Wanden.

According to the GeoNet website, tens of thousands of people felt the shaking from Northland to Dunedin.

The National Emergency Management Agency said there was no risk of tsunami resulting from the quake.

Fire and Emergency, Wellington City Council and the Wellington Regional Emergency Co-ordination Centre had no immediate reports of damage.

Horowhenua Mayor Bernie Wanden was preparing for work when the quake struck.

“I certainly felt that. That was a pretty strong earthquake. You sort of forget how they feel after a while.”

While it seemed there was no damage to his home, Wanden expected there to be checks done on the town’s buildings as the day progressed.

Levin’s Fire and Emergency station officer Chris Kennedy heard the earthquake before he felt it.

“It definitely started off as one of those little shocks, but it ramped up.”

Prime Minister Jacinda Ardern was in the middle of being interviewed on The AM Show when an earthquake struck.

Kennedy experienced the Christchurch aftershocks and had travelled to Kaikōura for search and rescue efforts when the seaside town was shaken by a 7.8 magnitude quake in 2016.

He had expected to be inundated with calls from concerned residents after the shake, but was yet to hear the phone ring.

“People have just taken it in their stride, but as people start to move around they might start to find damage.

“We’ve got a lot of old buildings so there’s potential for damage.”

A Horowhenua council spokesman said officers were making the rounds across the district, checking Gladstone Rd first, where slips were common during heavy rainfall and shakes.

“As well as going around the roads and checking we’re also checking water infrastructure because they are the lifelines for the community.”

New World Ōtaki owner Steven Cole, said a few things came off the shelves, but the clean up had been quick and the store was open.

“It was just a reminder of Wellington!”

Horowhenua College principal Grant Congdon said he hopped out of the car to see water pouring from the spouting sideways, which was “rather unusual”.

“That must have been just as it was happening.”

He was driving to school, so he didn’t feel the earthquake himself.

“We feel very [grateful] that the students and most of the staff aren’t here yet.”

He said staff at school felt it and dived under desks and in doorways.

“So the size of it was up there, for people to be taking that action.”

He said there did not seem to be any damage, but the campus manager was checking the classrooms.

In Manakau, 12km south of Levin, resident Beverley Dowling said the earthquake sounded like a freight truck, and her wooden villa “shook like crazy”.

“You could hear it coming. It felt like something was coming down the driveway and then it felt like the house had been hit.”

She rode the quake out in bed, but said the two cats hit the roof and were howling with distress. “This one felt really big.”

At Foxton beach, about 25km from Levin, Chelsea Parlato, 20, said the earthquake felt strong with a big jolt at first.

“It was quite scary. That was a lot bigger than we would have usually felt.”

She said the cat had been sitting peacefully on her lap, and jumped off in a flurry and with a fright.

Parlato stood under the doorway with the cat in her arms.

Foxton Beach Surf Lifesaving Club president Shane Parlato said he was on his way to work in Palmerston North when the earthquake hit.

He was sitting at a set of traffic lights and said it felt really windy — when there was not a lick of wind.

Valerie Love was on the train into Wellington on her way to her first day back at work after the lockdown.

She did not feel the shake because they were moving.

“There are a bunch of school girls near me – spaced appropriately of course – and they all got texts from their mums checking in, so they knew what was happening way before I did!

“The mood on the train is good – the kids have been playing Call me maybe on their phones and other pop songs.”

She said there had been no word on how long they will be on the tracks.

A Transdev spokeswoman at 10am said any trains that were stuck between stations had since been brought into stations, where there were limited bus replacements.

It was hoped the Wellington rail network would be given the all-clear later on Monday morning.

Trends Of Pickup Truck Market Reviewed For 2020 With Industry Outlook...

Motorcyclist killed in wreck with pickup truck on Highway 49