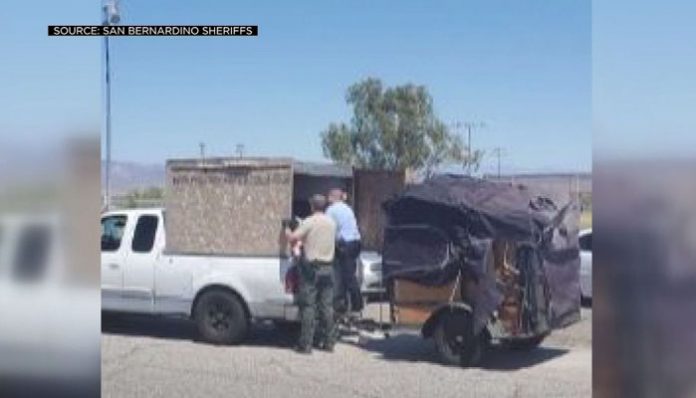 NEEDLES, Calif. (KOVR/CNN) – Authorities in California arrested the aunt of five children and two other people after the children were found riding in a makeshift wooden box in the bed of a pickup truck.

Five children, ranging in age from 1 to 13 years old, were found unrestrained in the box on the back of the pickup truck. The box had no ventilation nor water on a day when temperatures outside reached around 100 degrees. (Source: San Bernardino County Sheriff’s Department/KOVR/CNN)

The San Bernardino County Sheriff’s Department credited people who tipped them off to the situation Tuesday after hearing cries from inside a box in the back of a pickup truck at a rest stop near the California-Arizona border.

“I don’t recall in over 30 years being here that I’ve ever heard of a situation quite like this,” said Cindy Bachman, public information officer for the sheriff’s department.

Deputies managed to stop the truck in Needles, California. Inside the box were five children, ranging in age from 1 to 13 years old. They were not restrained in the box, which had no ventilation nor water on a day when temperatures outside reached around 100 degrees.

Deputies also found illegal drugs, drug paraphernalia and a shotgun inside the pickup.

The children’s aunt, 39-year-old Zona Brasier, was one of three people arrested for child endangerment after the children were found. The others were identified as 40-year-old Kenneth Standridge and 41-year-old Aushajuan Hardy.

However, the San Bernardino District Attorney’s Office later said Hardy is not facing any charges from them.

Brasier’s stepbrother, Dale Madden, says his sister was driving the children from Sacramento to Oklahoma to help raise them away from a high-risk home life. Their mother had recently become homeless.

But he says the dangerous conditions the children were found in are stunning and sad.

“I just couldn’t believe it. 100-degree heat, I mean, you’re going toward Arizona?” he said “It’s just sad, man. I don’t know the truck or whatever. I just know, my sister, her heart was in the right place.”

Madden says when the children first left Sacramento they were in the cab of the truck. It’s unclear to him when they were moved to the back of the truck and into the box.

The children are now in the custody of child protective services.