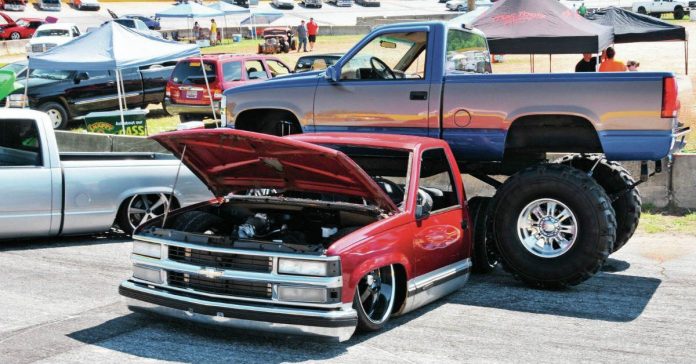 Pickup trucks were originally manufactured to be affordable work vehicles for the public, but they have also become some of the best utility vehicles to modify. They became so popular that even celebrities started driving cool modified trucks. Ultimately, trucks have become the sports vehicle for the masses.

RELATED: 5 Lifted Trucks And SUVs That Can Navigate Any Terrain (5 Lowered Ones That Are Built For Speed)

What is cooler than restomodded truck from the 1940s? Some of the restomodded vehicles found today are absolutely beautiful. Regardless of what purists say, these classics would certainly amaze people in the 1940s.

This family restored F1 is obviously airbagged. It is common to see classic trucks slammed to the ground. However, this F1 has kept a very sober look and feels as if it was stuck in the 1940s. The elegant style adopted on this truck will convince just about everyone that it’s among the most stunning restomod vintage truck out there.

The 1970s witnessed the production of some of the gnarliest vehicles. From muscle cars, to trucks, and luxurious cars, the US manufactured the most thrilling cars at the time. Logically, the people that grew up staring at those cars wanted to get the very vehicles that will remind them of their childhood.

This murdered-out F-150 is beautifully lifted. Though these look nice when slammed, this particular 1978 F-150 looks absolutely stunning with a nice lift kit and some blacked-out rims. The addition of aesthetics parts gives the truck a more modern look.

The post-war era was the golden era of American cars. It is quite difficult to find cars that are just as iconic as American cars of that era. As European cars were not widely available, American carmakers were waging a commercial war against one another. Though muscle cars grabbed the attention, pickup trucks from that era are all the rage now.

This Chevrolet Apache is a marvel. Restored in beautiful and tasteful fashion, the old Chevy will not fail to please automotive fans and lovers of classic trucks. The addition of the chromed-out parts and metallic gray paint fit the truck perfectly. Restoring a truck to this condition is not for the faint of heart.

Mega trucks are nothing to mess with. Humongous and powerful, these trucks can do about anything. This mean machine coming out of Texas is the kind of modified Chevy trucks car fans must check out. It is unclear what Showtime Metal Works intended on doing with this truck, but the result is absolutely breath-taking.

A lot of work was put into modifying this Silverado. Equipped with a lift kit, among other goodies, it really is pure beauty. Though the truck may cost up to $60,000, it was a wise investment if your sole purpose is to turn some heads.

The Ford F1 used to be mainly used for milk deliveries, farm work, or any other activities requiring the use of a utility vehicle. As years went by, car fans nationwide decided to fix the rotting pickup trucks found in their great uncle’s backyards. Some tuners have more dedication and money than others, and it shows.

This Ford F1 is by far one of the most badass muscle trucks car fans would love to drive. There is nothing about this F1 that turn off car fans. Its huge supercharged engine cranks out a very decent 1000hp.

The Ford F-150 Raptor is Ford’s best truck to date. Surprising everybody upon its release, the Ford Raptor became an instant icon. Even if other domestic carmakers came up with similarly powered trucks, there are still a myriad of reasons why truck fans should buy the 2020 Ford F-150 Raptor.

RELATED: 15 Things You Should Know About the Ford F-150 Raptor

This green beast is equipped with a 4″ lift kit from Fabtech. Despite the already massive stature of the car, some people will have the need to turn the Raptor into a zombie killing machine. Though this Raptor was conservatively modified, the lift kit and front bumper give it a really aggressive look.

The Chevy C10 is one of those trucks that people are so used to seeing lowered that they look weird with regular ground clearance. The boxy design of the truck is perfect for a sick restomod project. With very poor aerodynamics, the C10 is one of the best trucks out there ready to be equipped with an LS4 engine.

This rubber burning C10 is not slammed to the ground per se. It is tastefully lowered. The truck is still functional, which is what matters the most. It seems as if this work truck was turned into a drifting vehicle for the pleasure of most automotive fans. It is unclear who currently owns this truck as it was a raffle prize a while back.

The Chevrolet Colorado has been around for quite some time. It gained popularity when large trucks were somewhat falling out of favor. With the Toyota Tacoma gaining more and more traction in the US market, Chevrolet decided to counter-attack by releasing an updated and powerful mid-size truck. The newer Colorado did not fail to keep people in awe.

This Baja-ready Colorado ZR2 is one of the most awesome Chevrolet Colorados truck fans cannot stop staring at. From the LED lights to the body kit and lift kit, this Colorado is a total war machine. Comfortable on the asphalt and on a sand dune, this Colorado is the extra versatility that was needed to make the ZR2 complete.

GMC has released some impressive trucks over the years. However, most GMC trucks tend be overlooked though they deserve all the hype. The GMC Syclone or Sierra are some of the most beautiful trucks ever released by GMC. The classic regular cab trucks released in the 1970s are actually better looking than some Ford or Chevy trucks.

What could possibly b meaner than a black and gold muscle truck? This restomod classic GMC C10 is what a lowered fast truck should look like. It is unclear how much power this V8 produces, but the side exhausts are absolutely gorgeous. This slammed truck is perfectly modded.

The Dodge Ram is among the most legendary trucks ever produced in the US. The ever-improving aesthetics and performances, the Ram has got some beautiful days ahead. After years and years of undergoing modifications, truck fans were able to single out some of the most insane mods that should be applied to a Dodge truck.

Modified by SCA Performance, this truck mainly inherited a lift kit, new rims, and some tinted windows. However, these minor modifications completely transformed the Ram truck. The truck went from being decent to being absolutely aggressive. This Ram is not the most aggressive truck made by SCA Performance. Their Black Widow Ram is even more impressive.

NEXT: 15 Slammed Trucks That Look Much Better Than Expected

Opinion | I Can’t Bring Myself to Stand In Line for...

55 per cent of work completed in Trucks Rest Stop on...