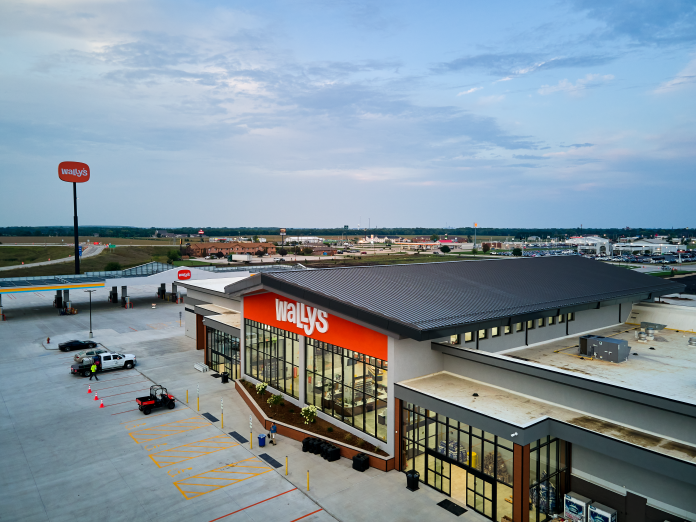 PONTIAC — The drive between Peoria and Chicago can be long, dull and devoid of convenient, clean places to use the restroom.

A new travel center in Pontiac purports to provide a solution to that last potential problem. Among other things.

Wally’s opened its first location earlier this month, at Interstate 55 and Illinois Route 116. It bills itself as “Home of the Great American Road Trip,” and a family-friendly one at that.

That friendliness extends to cleanliness, in the form of more than 40 bathroom outlets Wally’s President/CEO Michael Rubenstein assures will be hygienic.

“What’s the No. 1 thing that usually decides where to go on a road trip? Who has the cleanest bathrooms,” Rubenstein said.

Wally’s women’s restroom has 20 stalls, with floor-to-ceiling walls and doors. The men’s room has 10 similar stalls and 11 urinals.

“Just the size and openness of the bathrooms is really situated to the family traveler and to anyone looking to stop and have a good bathroom experience,” Rubenstein said.

The rest of the Wally’s experience includes 30,000 square feet of dining and shopping, as well as 76 fuel pumps outside.

Food options include bars for coffee, popcorn and beef jerky, as well as a carving station. None is part of a national franchise — all the food outlets are Wally’s-specific.

An 8,000-square-foot retail space offers proprietary shirts, hats, mugs, outdoors supplies and the usual items one might find at a truck stop.

But Wally’s isn’t a truck stop. That doesn’t mean truckers aren’t welcome, but Wally’s isn’t set up to accommodate tractor-trailers. That’s by design, according to Rubenstein.

“They have showers on site and a separate truck entrance,” he said. “The maneuverability around a truck stop can be a little daunting for the family in the minivan, going down the road. That’s who we’re targeting.”

Originally from southwest of St. Louis, Rubenstein and Wally’s Chairman Chad Wallis have driven I-55 numerous times between their home area and Chicago. They noticed a family-oriented travel center didn’t appear to be along the route.

Pontiac checked a lot of boxes regarding an initial Wally’s location, Rubenstein said.

It isn’t too close to Chicago or St. Louis. Local officials were welcoming. And it’s along Old U.S. Route 66, which passes through Rubenstein and Wallis’ hometowns.

“The mother road of U.S. highways,” Rubenstein said. “It wasn’t intentional by any means, but when it kind of came together, it really made sense and got us excited.”

The investment in the Pontiac Wally’s is north of $20 million, according to Rubenstein. The current company headquarters is in Houston. That area is home to Buc-ee’s, a Texas-centric travel-center chain that offers similarly spotless restrooms.

Rubenstein acknowledged the Buc-ee’s-Wally’s comparison but suggested his concept has more of a Midwestern flavor. A second location is planned, as are others in major Midwest travel corridors.

The coronavirus pandemic helped delay Wally’s debut, first set for early July. But an apparent, COVID-inspired public preference for highway trips instead of air travel might make Wally’s timing right, according to Rubenstein.

“I think we’ll see how that kind of plays out,” he said. “We think our store is positioned to really capture that consumer set.”

How Medium and Heavy-duty Truck Steering System Market Will Dominate In...