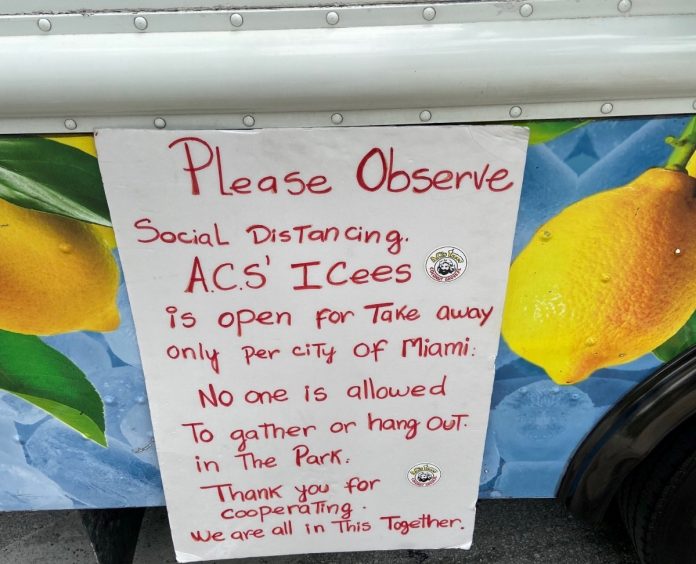 Allan “A.C.” Cohen has been serving frozen lemonade and hot dogs to Miami families for more than 40 years.  Beginning in 1978, A.C. — only his mother called him Allan — made a career out of turning lemons into lemonade, and A.C.’s Icees became a fixture at Kennedy Park in Coconut Grove.

But all that changed on March 19, when the spread of the coronavirus prompted the City of Miami to shut down its public parks.

“The City of Miami park director texted me and said that all parks must be closed at 2 p.m. that day,” A.C. tells New Times by phone. He had an hour to pack his gear and vacate the spot that has been officially reserved for his truck. “A park ranger came by and locked up the entrance to the park.”

Miami Commissioner Ken Russell helped the vendor move to a temporary spot on Pan American Drive, right near Miami City Hall. ” I know that people are posting on social media that I’m back after three weeks,” A.C. says, “but the truth is that I was back after only one hour.”

Business is down, he says, but people’s reactions when they see his truck are priceless. “So many daily things have been taken away these past few weeks, I think this is one little pleasure people feel they can have.”

To conform to social-distancing requirements, A.C. taped a big sign to his truck reminding people not to gather nearby or to hang out in nearby Regatta Park, which is closed to the public. Colored tape marks the recommended six feet of separation between customers. “It’s my responsibility to tell people that come up on bicycles that they have to get their Icees and go,” A.C. says.

The truck is open daily, but A.C. cut his hours to 11 a.m. to 5 p.m. when his one employee bowed out. “I have to get some sleep to stay healthy,” the Icee man notes.

Apart from allowing the truck to park in a different location, the city made no special exceptions for A.C., Russell tells New Times, “His truck sells food along with lemonade, so it’s considered an essential business like any other restaurant and food preparation establishment,” the commissioner explains.

Russell notes that solving A.C.’s unique problem had a positive impact that went beyond the frozen lemonade truck.

“He seems like he’s a one-man show,” the Russell says. “But he has a professional dog walker that he employs, and he has a lady that purchases supplies. There’s a ripple effect with even the smallest of small businesses.”

And then there are A.C.’s customers, who continue to reap the simple pleasure of an Icee on a hot Miami day.

“It should go up, but I don’t like raising prices,” A.C. says. Business might not be as brisk as it was at Kennedy Park, he adds, but “I’m providing some normalcy in this chaos.”

Laine Doss is the food and spirits editor for Miami New Times. She has been featured on Cooking Channel’s Eat Street and Food Network’s Great Food Truck Race. She won an Alternative Weekly award for her feature about what it’s like to wait tables.