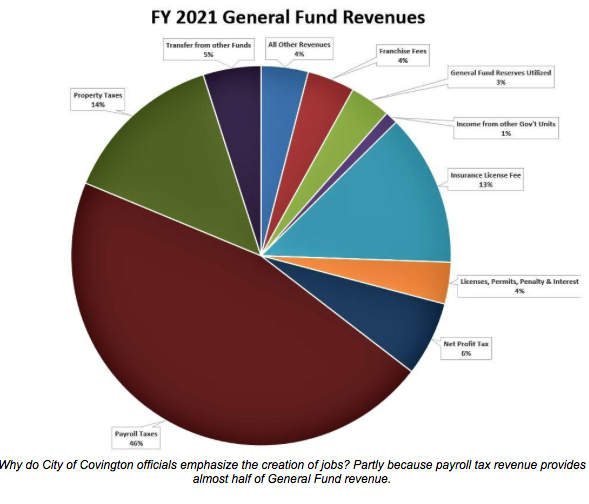 Design for a dog park. A new home for Public Works. A return to full-time Code Enforcement inspectors. Investments in small businesses. Almost $700,000 for smoother streets. Downtown Christmas decorations. And the purchase of the 23-acre IRS site and work to prepare it for the market.

Amid a global health crisis and a devastated national economy, the Covington Board of Commissioners passed a budget for the fiscal year beginning July 1 that – while it doesn’t raise taxes and doesn’t retreat from core services – makes targeted investments to strengthen the local economy and raise the quality of life for Covington residents.

“I don’t want to call this budget a ‘miracle,’ but I’m very proud of what we’ve crafted given the challenges facing us,” Mayor Joe Meyer said. “In many ways, this was the consummate ‘status quo’ budget. At the same time, it positions Covington for a very dynamic future.”

City officials called the document “a nightmare” to put together, given the broad array of challenges and unforeseen circumstances (see accompanying release) that mandated a conservative philosophy.

But the size of the budget’s overall dollar figure — $149,145,170 — belies both that difficulty and that approach.

“Call it the tale of two budgets,” City Manager David Johnston said, saying that it was imperative to understand the separate parts of the budget – the General Fund and the All Other Funds — how they get their revenue, and what they’re used for.

The General Fund
The General Fund, which totals $57,702,301 in the coming budget, uses revenue from familiar tax streams and allocates money primarily for staff and operations. Some 56 percent of the General Fund goes toward public safety (fire and police).

“The General Fund this cycle basically holds us in place – it doesn’t raise taxes, it doesn’t create a bunch of new programs, and it doesn’t cut services,” Johnston said. “That’s a function of the devastating blow of COVID-19 and other budget pressures.”

And, actually, Covington expects to dip into its unrestricted funds by about $1.73 million this coming year to balance its General Fund the budget, a step that cities across the Commonwealth are having to take, Johnston said. Most of Covington’s gap was created by pay raises negotiated as part of long-term union contracts last fall and increases in health insurance costs.

“We don’t want to go that route and dip into unrestricted funds every year, but given the extraordinary times facing the world, we felt it was appropriate to do so this time,” Johnston said.

At the same time, Covington expects to be able to contribute money to its so-called “rainy day fund” at the end of the fiscal year. That fund, by the way, started the year with a balance of $9.39 million and has grown in recent years.

Separately, the All Other Funds budget, which totals $91,442,869, uses two dozen dedicated funds to invest in the City’s future. These funds get revenue from a wide variety of sources, including federal and state grants, old bond proceeds, trusts, parking revenues, annual federal allocations, and other dedicated sources. The money is likewise used for a wide variety of expenditures, such as housing assistance (down payment grants, emergency home repairs, and housing choice vouchers), playground renovations, improvements in Devou Park, vehicles and equipment, streetscape projects, and health insurance.

(The City is waiting for approval from the federal government of its proposed allocation of COVID-19 emergency assistance. The funding is currently earmarked for needs like emergency business assistance, food delivery, Wi-Fi infrastructure to help in off-site education, and homeless assistance.)

The All Other Funds budget is substantially inflated this year because of special arrangements for the IRS site and the new Public Works complex.

IRS site: The Commission voted in May to issue up to $30 million in debt to raise funds to move forward on the massive economic development project, including $18.45 million to buy the 23-acre site, $5 million for demolition of its sprawling building, and $4.05 million for site improvements and contingency costs. A conceptual master plan for the site includes a restored street grid, a levee park, a community plaza for festivals, and a mixture of buildings containing offices, retail shops, and places to live.

The City plans to pay off the debt with future tax growth revenue and recoup its investment with payroll tax revenue and sale of a portion of the parcels to developers. Long-term financing costs are lower than expected because Moody’s Investors Service in April upgraded the City’s credit rating for the second time in two years.

Public Works home: The All Other Funds budget also includes a line item of $8 million representing expected proceeds from the pending sale of the Public Works complex at 4397 Boron Drive to Rumpke Waste & Recycling for the company’s Northern Kentucky headquarters and a new transfer station. Some of that money will be used to buy 3.68 acres at 1730 Russell St. and renovate it as the new home of Public Works. The remaining portion is unallocated.

Other priorities and programs funded in the 2021-22 budget that will directly benefit taxpayers:

• $150,000 for the Small Business Program’s rent subsidies and façade forgivable loans.
• Continue implementing the citywide economic development strategy (the Garner report).
• Hire a business attraction manager.
• Training for the new Board of Architectural Review and Development, as recommended in the proposed Neighborhood Development Code set for adoption.
FIRE
• Begin replacing the self-contained breathing apparatus that firefighters wear when entering a burning building.
• A second set of turn-out gear for every firefighter to meet national health guidelines aimed at reducing the incidences of cancer and other health woes caused by wearing gear contaminated by smoke.
• $110,000 for an SUV used as a command vehicle and a utility pickup truck used to pull a special operations trailer.

• Funding to start a youth soccer league.
• $70,000 to design improvements at Goebel Park and build a dog park.
• $200,000 for Phase II of the renovation of Barb Cook Park, including improved basketball courts.
• $100,000 for repairs at Randolph Park and Pool.

• A new assistant city clerk position.
• $15,000 for downtown Christmas decorations.
• $60,000 to hire a consultant to transition toward priority-based budgeting, which will create more transparency and openness while providing better context for decisions.
• $50,000 for planning toward a new City Hall building.

• Allocates new or carryover money for a variety of projects and line items, including annual programs funded by grants and multi-year projects that are underway or in the planning stages. Ongoing projects (carried over in part from previous years) include Riverfront Commons, the Western Avenue slide repair, and streetscape improvements on a variety of downtown streets to make them more attractive to business investment.
• New projects include $40,000 for renovations at the Carnegie Arts Center, $1 million for repairs to the levee near Oakland Avenue, and funding for the Pointe Benton detention basin.

The City of Covington

This Custom Mercedes X-Class Is A Rugged & Luxurious Pickup Truck

This Tiny Electric Motorcycle Could Be the Perfect Commuter Bike