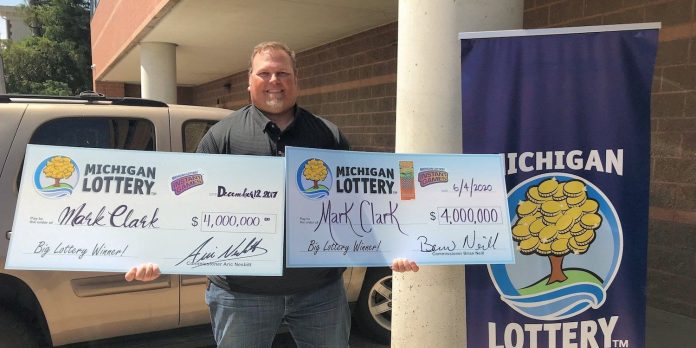 A former truck driver from Michigan got extra lucky on Friday after winning the $US4 million jackpot on a lottery scratch card for the second time in three years.

Mark Clark, of South Rockwood, Michigan, said he was left speechless when he found out he had won earlier this week, adding: “You don’t think you’ll win millions once, and you definitely never think it would happen twice,” he said, according toa Michigan Lottery release.

“It’s hard to put into words exactly what I am feeling.”

The 50-year-old former truck driver won his first jackpot in 2017, while he was delivering fuel to a gas station in Hudson, Michigan. After scratching the lottery ticket, it said to see the shop clerk.

“As we were talking, he [the clerk] scratched the rest of the ticket and then looked at me with a shocked look on his face and said: ‘Mark, you just won $US4m’,” he said at the time.

Not long after, Clark retired. However, he continued to buy instant lottery tickets whenever he could occasionally.

This time around, Clark decided to buy one while he was out shopping. According to him, it was a similar card to the one he had gotten three years prior.

“I scratched the ticket off in the store with a coin my dad gave me about 10 years ago,” he said. “We lost him about a year ago after some health struggles, and I can’t help but think maybe that lucky coin helped me win this.”

The 50-year-old said he plans to use the money to continue to make “great memories” with his family.

“After the first win, I retired from my job and spent a lot of time fishing,” he said. “My dad and I always used to fish together and have great memories of that, so this will help me keep fishing and enjoying time with my son and family.”

Site highlights each day to your inbox.

How Leading Players Are Decoding The Impact Of Coronavirus On Fire...

Search On For 2 Suspects In Auburn Convenience Store Burglary