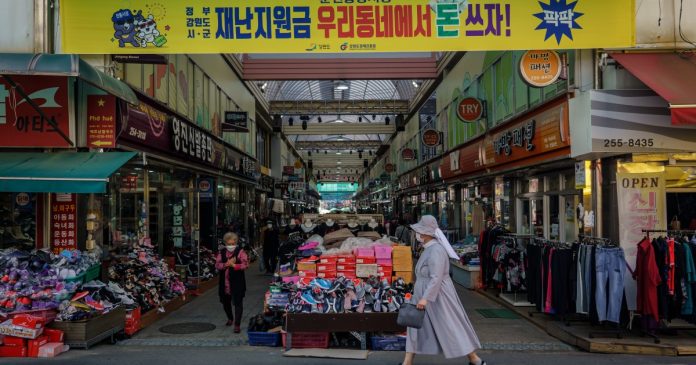 Choi Moon-soon fanned out his wad of coronavirus stimulus money for the cameras like a gambler flaunting hundred-dollar bills.

He navigated the narrow aisles of a market in Gangwon province, walking between stalls stacked high with socks, hats and kitchen wares that in recent months had gathered dust. Cameras flashed with his every step. An entourage of dozens followed.

Choi — the provincial governor — was ready to drop some dough.

Gangwon, a mountainous land in the northeast of South Korea, was largely spared the coronavirus outbreak that has wreaked havoc around the world — but its tourism-dependent economy was not. Ranks of Japanese and Chinese visiting filming sites for Korean dramas evaporated overnight, as did the weekend travelers from Seoul that account for much of the area’s income.

Having mostly contained the virus earlier than other countries, South Korea is turning its attention to recovery and fixing months of economic devastation, while still struggling to stem smaller cluster outbreaks. Like governments elsewhere, including the U.S., the country handed out cash stimulus payments to most citizens to revive frozen local economies.

Choi, a former broadcast journalist in his 10th year as governor, had over the decades left the household shopping to his wife, wearing clothes and shoes she picked out for him. But now he wanted to lead by example to encourage residents to spend.

So on a recent Monday, with hordes of reporters and fellow bureaucrats in tow, he put on a suit jacket and went shopping.

The governor strolled into a pharmacy and picked out a few face masks. He then sheepishly pointed to his thinning hair.

“I’ve been wanting to try hair growth stimulants because I have hair loss,” Choi told the pharmacist behind the counter. “But it’s not a guarantee that it’ll grow back, right?”

Lee Jong-ho, the 78-year-old pharmacist with a wispy crown a tad sparser than the governor’s, suggested a product he uses — a red box with a gold trim, with a price tag of about $20. Choi bought a box, as did another government official in his entourage also with a receding hairline.

Lee and his wife had been running the pharmacy at the entrance to Jungang Market in downtown Chuncheon for 40 years. But as corporate retailers grew to dominate and online shopping became the norm, the historic market built by the U.S. military during the Korean War — once called “Yankee Market” by locals — was increasingly forgotten, except among graying regulars.

Across Gangwon province, sales for small businesses were down by 70% at the lowest point in late April.

Lee’s pharmacy stayed busy with a surge in demand for masks. But not much else. People had largely stopped going to hospitals for anything other than the coronavirus, which meant he was selling virtually no prescription medication. His profits tumbled.

When South Koreans started receiving the stimulus payments in May — about $830 for a family of four, which can only be used at small businesses — he saw an uptick in customers. Some splurged on pricey dietary supplements as a gift for elderly parents, he said.

When Lee and his wife got their stimulus payments, though, they felt they didn’t need the money. They’d fared better than most of their neighbors. They donated it to Mary’s Home, a shelter for pregnant girls and women.

Sister Martha Park walked through the halls of Mary’s Home with a drooling baby at her hip.

The coronavirus kept volunteers and new residents out of the home for months — one infection among the young mothers, babies and nuns living together in the three-story home would have been catastrophic.

In recent weeks, Park and her fellow Sisters of the Good Shepherd debated among themselves what to do with their own government stimulus checks. Having taken vows of poverty, they had little need for consumer goods. Should they forgo the payments, returning the money to government coffers? Should they donate the funds?

They decided to pool their payments to buy goods for those in need. They bought detergent and canned food for single mothers who once lived in the home. They sent money to fellow Good Shepherd sisters working with domestic-violence victims or migrant farmworkers, who don’t receive stimulus checks because they’re foreign.

“These are people who struggle even in the best of times,” she said.

Stacked in the entryway to the home were boxes of diapers from priests in the Chuncheon area, who gathered their own stimulus funds to buy baby supplies and rice for the home.

With the donation from the pharmacist and his wife, in late May, Park took a single mother with a 7-month-old baby shopping for kitchen goods for her new home. The single mother was about to start work at a factory and had moved into transitional housing. But her cupboards were bare.

At Yoohan Total Kitchen, a large kitchenware store across a stream from the home, the young mother and the nun picked out everything she’d be needing for herself and her young son: plates, pots, cutting boards and the like.

Half of the customers at Yu Han-yeul’s namesake store, which sells items including kitchenware utensils and industrial-sized vats, own nearby restaurants.

Much of the restaurant business in this town surrounded by rivers and lakes is dependent on weekend travelers from Seoul, an hour’s train ride away, many of whom come for the region’s famous chicken galbi and makguksu, a buckwheat noodle dish. Even though South Korea never imposed mandatory business closures like other parts of the world, for weeks no one was traveling. Several of Yu’s regulars went bankrupt.

Yu’s business was down by about half at the worst of it. The stimulus checks — which are required to be spent locally by Aug. 31 — came just as he was starting to fret about rent and his monthly inventory bills.

South Korea is considering additional rounds of cash handouts, after 99% of eligible households accepted the payments, at a cost to the government of about $11 billion — part of about $200 billion in stimulus spending to jump-start the economy post-pandemic.

Even so, Yu was bracing for a long path to recovery.

“If there’s another outbreak in the fall, it’ll all be downhill,” he said. “We’re not in the clear.”

His family’s coronavirus funds had gone to clothes and school goods for his children. His Hyundai Porter truck, which he uses to make deliveries, was also in need of new wheels.

Yu took his truck into Yoohan Motors in downtown Chuncheon, his go-to mechanic ever since the owner dropped by Yu’s kitchenware store out of curiosity because their businesses share the same name.

Jang Pil-uk, the mechanic, had seen his sales go up by about 15% to 20% during the epidemic. He provides oil changes and other routine maintenance at a cut-rate price — “bait,” he said, to get customers into his store and buy tires or other parts. People were searching harder for bargains of late, he said.

“It’s because we’re cheap,” said Jang, who said his prices are about 30% lower than average. “When life is hard, people flock to places that are cheap.”

In less than a month, Jang had already blown through his stimulus check, mostly at restaurants with friends and business contacts. He went to Hoeyeonglu, a famed Taiwanese restaurant across the street from his shop with a delicious cold noodle dish, five times on the government’s dime.

Yu Tehchia, the restaurant’s second-generation owner-chef, was still waiting for his check. As a Taiwanese national and permanent resident, he was eligible but had to file extra paperwork he was waiting to get approved.

He’d felt the impact of the stimulus cash at the restaurant, which opened five decades ago and is one of the town’s oldest establishments. But business is still down by 20% to 30% compared with pre-coronavirus levels. Much of his clientele used to come from groups of workers from nearby City Hall and provincial headquarters. They have yet to return.

A few times a year, Gov. Choi used to drop in — but not since the coronavirus.

“People are going to burn through it so quickly, in a couple weeks,” said Yu, the chef. “People spend money when there’s hope.”

Help-a-Trucker drive kicks off in N.B.