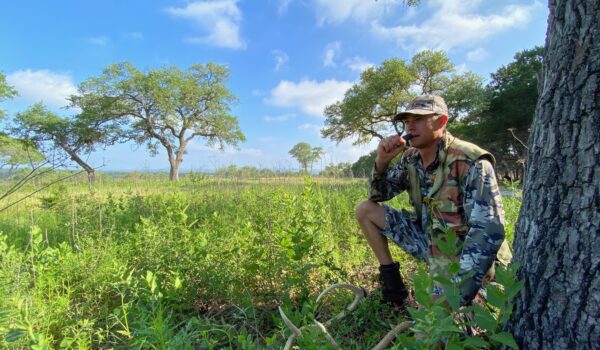 A small herd of axis ran across the road, shortly after driving onto the property of Joshua Creek Ranch. I could feel my heart pumping, it was on.

“The axis rut is about to start here any day,” Eric Harrison said. You could feel his excitement in his delivery.

Harrison has worked for Joshua Creek for over a decade and has a contagious passion for axis deer.

A few years ago, Harrison was cleaning out his “gear closet” to prepare for the birth of his first born. In the midst of organizing, he started playing around with various calls he found.

“I picked up this one and blew it and thought to myself, wow this sounds like an axis buck,” he remembered.

He tinkered with the calls and ultimately created the Ezy-Axis deer call.

The call creates the sound of axis buck screaming. At first, it sounds similar to those bazookas you would find in a gift bag at a kids birthday party. The scream is meant to represent a buck’s dominance, location and willingness to fight or breed. It works on trophy bucks as well as doe.

Before the sun came up, we were cruising the winding roads of the ranch.

Two screams came from the left and one a little farther away. It felt as if we were surrounded by bucks as we got out of the truck, with each one marking their territory and letting the others know where they were.

As dense fog started to lift on the Hill Country, we settled into place against an oak tree.

“Are you ready? Because when I use this call they are going to come running,” he said.

Harrison let off three screams, a rattle of horns and a quick cow squeak. Within seconds, the herd started moving in our direction.

The call sounded just like the bucks we had heard earlier.

What looked like only a few, quickly turned into a sea of thousands of spots and about 20 sets of eyes staring at us.

The call worked just like Harrison said it would. It was exhilarating.

It felt like raw and natural hunting. They were right there curious while maintaining caution.

The spots became a moving collage. I was confused as to which one to pick; there were so many choices.

“If you are going to make a shot you need to shoot now,” Harrison told me.

I became fixated on one of the spots and taking the shot was a blur.

All but one of the deer scattered and we sat relishing in the moment we had just been a part of.

“Go relax and I’ll get the animal skinned and packaged for you,” Harrison said.

As I waited for the fresh axis meat, I listened to multiple bobwhite quail sing to their mates and I rocked back and forth in a rocking chair in front of the luxury ranch style room. Joshua Creek is known for upland bird hunting, sporting clays and its five-star accommodations.

What Is the Outside Buyer’s Guide?

Everything you need to know about bike racks for your vehicle