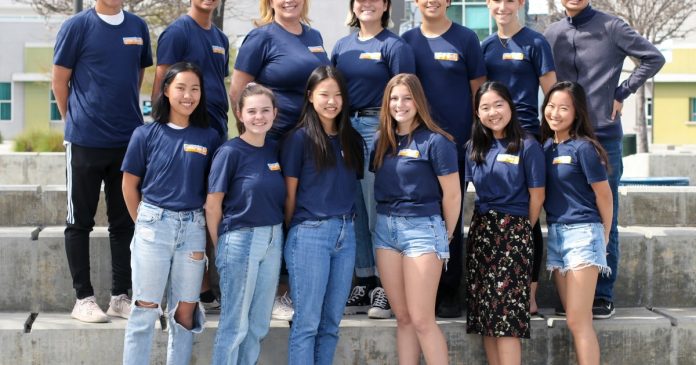 On the Friday morning in March when teachers at Del Norte High School announced that classes were shutting down, many of the students cheered.

The editors of the yearbook gulped.

They were nearing the finish line of their memory-making marathon, the chronicling of one year in the life of the campus located on the border of 4S Ranch and Del Sur. They had about 50 pages left to fill, and much of that was going to be devoted to spring sports, which had just been canceled, too.

“COVID-19 was a huge curve ball,” said Celine Cen, a 16-year-old junior and one of the book’s three editors-in-chief.

High school yearbooks aren’t really built for curve balls. Theirs is a well-oiled machine of summer idea camps and page-design templates and deadlines carefully staggered throughout the year for the orderly creation of books that typically run more than 300 pages.

When the virus threw its wrench into the gears, the 10 students working on Del Norte’s yearbook, “Traditions,” were about three weeks away from their last deadline. So in a scene repeated at high schools throughout San Diego County, they scrambled.

No longer able to meet in person on campus, they held internet Zoom sessions from home with each other and with their adviser, English teacher Robin Christopher, to figure out how to include athletes whose seasons never happened.

They brainstormed ways to highlight the pandemic and its impact on students’ lives, too. “We know this is something we’ll all be looking back on years from now and want to remember,” said junior Esther Jin, 16, another top editor.

Sometimes working 10-hour days, they tracked down students via social media for interviews about how they were staying in shape or what TV shows they were binge-watching. They wrote a section about how their education got moved online for the last part of the year.

They invited seniors to write letters to the coronavirus itself, sharing the disappointment they felt about what has been lost — not just baseball games and track meets, but prom and hanging out with friends and maybe graduation, too.

The staff members assembled photos and wrote captions and put together a timeline of the coronavirus. “It was crazy,” said junior Sydney Bourassa, 17, the third editor-in-chief, “but somehow we filled the pages.”

The theme for their yearbook was chosen months ago, a nod to a phrase students routinely use when they are starting to tell a story. It was too late to change it, but the editors think it still fits, because the yearbook, in addition to chronicling the usual things, will document what students were feeling and doing after the pandemic upended everything.

Editors like to have every student mentioned multiple times in a high school yearbook. They know it’s a keepsake that many will hold onto for the rest of their lives.

“Our design website has a way to see who is in the yearbook and who isn’t, so we can usually just go out on campus during school and find the ones we need and get another photo or a quote,” said senior Madison Burke, 18, the editor-in-chief of Patrick Henry High’s yearbook. “But all of a sudden we couldn’t do that anymore.”

And not everybody is on social media, she said, so tracking them down that way didn’t work, either. In the end, roughly half of the Del Cerro school’s 2,500 students are mentioned two or more times.

“We wish it could have been more,” she said. “We really want everybody to feel included.”

To fill the spring-sports gap, Patrick Henry’s yearbook staff members used pictures taken at practices before the seasons were canceled. They emailed parents of athletes and asked for photos. They interviewed students about how having the games wiped out made them feel.

“We had to get creative,” said staff member Kali Rye, a 14-year-old freshman. “We talked to athletes about their techniques, or took pictures of their gear.”

They also arranged contributions from students about things they did while in quarantine — at least one learned how to ride a unicycle — and created pages with blank places, in the shape of sticky notes, so students can write in what movies they watched while they were stuck indoors or what their favorite snacks were — the kinds of pop-culture touchstones that have long been staples in high school yearbooks.

“Once everybody left campus, getting students to respond was really challenging,” said Rachel Samuelsz, the yearbook adviser and a music teacher at Patrick Henry. “The editors will tell you they basically had to harass people, texting them over and over and over.”

She said they’d hoped to use more school-specific coronavirus content, but limited staff resources and looming deadlines sent them instead to templates about the pandemic created by the yearbook publisher, Herff Jones.

When the yearbook was sent to the printer last weekend, it had as many pages as originally planned. “Actually, we could have used more,” Samuelsz said, because of the number of parents who wanted to place “senior ads” celebrating the derailed class of 2020.

The most exciting day in any yearbook kid’s life is when the boxes arrive from the printer.

“It’s magical for them to see something they developed the previous April as a concept become a physical book,” said Christopher, the Del Norte adviser.

At her school, in a normal year, the students who put the yearbook together get called out of class to watch the truck arrive. They unload the boxes, 12 yearbooks per box, and bring them into a classroom. (This year, the school sold 1,500 yearbooks — so 125 boxes.)

“They can’t look at the yearbook until all the boxes are unloaded,” Christopher said. “If they look at the book first, I’ll lose them. They just start flipping through the pages and I can’t pry them away.”

Yearbooks usually get distributed the week before finals, and that’s part of the thrill, too — seeing the reaction of their classmates, watching them sign each other’s books. The smiles.

This year, it’s unclear when the books will arrive. The printing plant in the Midwest has been shut down, not deemed an essential business. If all goes well, maybe late June or July, local schools have been told.

But then how will the yearbooks be distributed to the students? The editors are hoping more of the stay-at-home restrictions will be lifted by then, and some kind of signing party can be arranged on campus.

If not, there’s talk of drive-through distributions at the schools. Maybe some way to send inscriptions to each other over the internet.

“I’m trying not to think too much about it,” said Bourassa. “It’s just too sad and disappointing.”

Not much time for wallowing anyway. One of the Zoom classes she had this week was to talk about possible themes for next year’s book.

COP TALES: A funny man and a great commander | Cop...