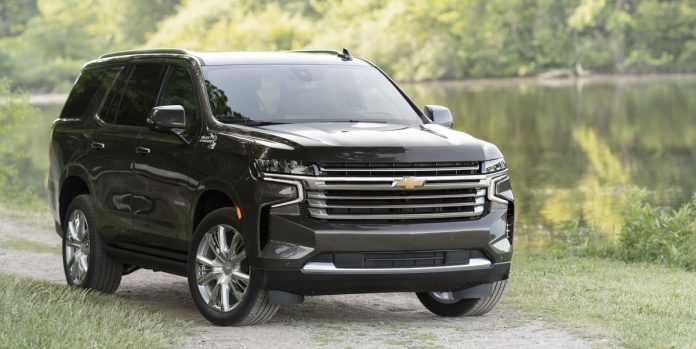 Chevrolet’s very large SUV — but not the largest. That honor, of course, goes to the Chevy Suburban, which stretches 18 feet, 10 inches from stem to stern; the Tahoe is 15 inches shorter.

From soup to nuts. The 2021 Tahoe and Suburban are fresh out of the box, replacing venerable models that have been staples of Uber fleets, police departments and parental driveways since 2014.

The biggest news from a technical standpoint is the adoption of an independent rear suspension, which engineering nerds can ramble on about ad nauseum but for buyers’ purposes, simply means that it takes up less space at the cost of some extreme off-road capability. In practical terms, that means the new Tahoe offers a whopping 66 percent more cubic feet of cargo space with the third row up, as well as 40 percent more legroom for tertiary occupants.

But seeing as how it’s an all-new model, well, just about everything else has been updated, too. There’s a new exterior design inspired by the latest Chevy Silverado (albeit better-looking), a new interior layout with improved infotainment and easier-to-use seating, and a 10-speed automatic standard on all models for better acceleration and, ideally, improved fuel economy.

What makes it special?

Along with the Ford Expedition, Nissan Armada and Toyota Sequoia and Land Cruiser, the Tahoe is one of the few old-school giant-sized SUVs to choose from — a vehicle combining the towing, payload and off-road capabilities of a full-size pickup truck with the interior room and seating capacity of a minivan.

With the 2021 model, Chevy aims to bring more of the carlike characteristics that buyers want to the Tahoe without compromising the brute power or ability beneath the skin. Sure, it can tow 7,600 pounds or more in every trim, crawl up trails that would destroy family cars and carry 123 cubic feet of cargo with the second and third rows folded down — but it also offers an available rear seat entertainment package with dual second-row touchscreens the size of iPad Pros, a giant head-up display, a suspension that lowers the rig to let you in more easily, and a host of active safety systems to keep you from accidentally running over anyone or anything smaller than you…which is, really, most other vehicles.

How does it drive?

Better than you’d expect, given its size. GM’s powertrain and chassis development teams don’t mess around (see: the Corvette, the Camaro, the CTS-V, etc.), and they’ve done an admirable job of making this rhino act like…well, if not a gazelle, then at least a wildebeest.

My tester was the top-shelf High Country trim, which comes standard with the larger 6.2-liter V8 and the magnetorhelogical Magnetic Ride suspension; mine also came with four-wheel-drive and the adaptive air suspension, which, as in similarly-equipped Ram 1500s, can both level out the ride in response to load and raise or lower the vehicle for better ground clearance or entry and exit.

Tragically, a busy schedule and the coronavirus pandemic meant my first drive was limited to a few hours of running chores in New York City, but it proved an adept companion for the task, once I acclimated to the sheer size of the thing. Cutting through aggressive Manhattan traffic and merging onto the highway both proved effortless, and while it’s no Porsche Cayenne in the turns, it never felt anything less than planted. The independent rear suspension makes less difference to ride comfort than expected from the front seat, but those in the latter rows are sure to appreciate it far more.

A definite improvement over the previous Tahoe (and, let’s not lie, the current Silverado). The control layout combines a bigger, better touchscreen infotainment system with a small arsenal of hard buttons scattered within easy reach of the driver, taking full advantage of the all the space inside. (There’s a boatload of cubbyholes, cupholders and other places to store things, as well.)

The High Country goes all-out on the interior trim, as well, with leather covering seats and other interior surfaces in equal measure. Still, there’s more hard plastic than you might like for the price, and the black-on-black trim of my tester gave it something of a funereal look inside.

There’s no arguing with how capacious it is in there, though. Thanks to the sliding second-row captain’s chairs, I was even able to squeeze my six-foot-four-inch frame into the third row — albeit, not at the same time someone my height could have occupied the seat ahead of me, but still impressive nonetheless. You could easily fit a quartet of adults in back, so long as they were all below six feet tall. (The third row technically seats three, but good luck getting that many back there unless their shoulders and/or hips haven’t reached puberty.)

All this capability, of course, doesn’t come cheap. Fully loaded, my High Country test truck came in at $79,045 with destination. The equally-new Cadillac Escalade — which packs the same engine and transmission, same new independent rear suspension and most of the other 2021 model year upgrades found on the Tahoe, but adds more luxury features and a cool 38-inch curved OLED display — starts at $80,490 for a 4WD model, and it’d be hard not to see the appeal in stretching to the fancier model for an extra $1,500.

A better bet, in this reviewer’s opinion, would be to opt for a slightly less ostentatious Tahoe. The entry-level LT, after all, starts at $58,095 with 4WD, and the sweet off-road-optimized Z71 is just $2,400 more. Still, if you’re the sort of person who likes their SUVs as capable and comfortable as possible but would rather not rep a luxury badge..get yourself to High Country, friend.

Elliot Lake man ran over his own pickup with the log...