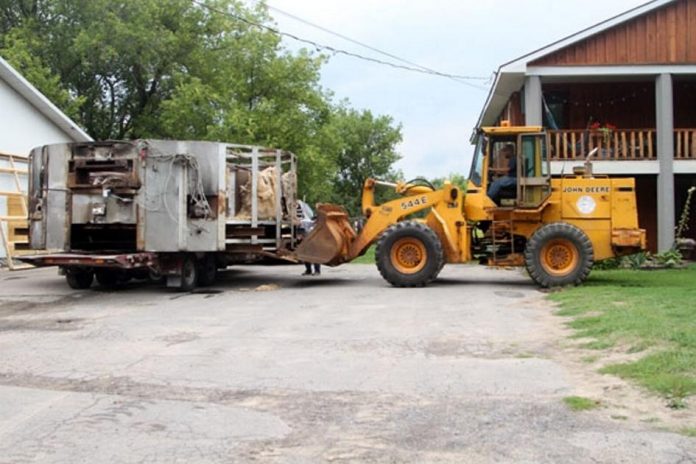 A 19-foot oven was brought into Martin’s Bakery in Moira on Friday, as the business changes hands from Lloyd and Ann Martin to their grandson, Josiah.

The feat involved a police escort for the massive oven as it moved east on U.S. Route 11 from the Jefferson County community of Theresa and the tearing down of walls of a converted warehouse behind Martin’s Country Store to fit the oven into the building.

A crew of six men was needed to transport the oven, an oversized load, from the truck bed into the building.

The crew employed three pieces of heavy equipment to get the oven off of the trailer bed; it sat suspended in the air for a few minutes until it was gently lowered onto the pavement.

The Martins handed the family-owned business to their grandson in April of last year, when Josiah Martin called the business a blessing.

“God has blessed us with this business and made it prosper, and it’s because of him that we’re here,” Josiah Martin said.

The oven-moving operation even attracted a few onlookers and slow-downs from cars passing by the scene of heavy machinery and all the trucks that were required to transport both the forklifts and the oven itself.

Henry Martin, Lloyd’s uncle, first opened the family pretzel-making enterprise in the 1930s in Akron, Pa., and managed it for about 40 years until Lloyd Martin bought it in 1974. Lloyd Martin ran the Pennsylvania bakery until 1984, when he sold it to his brother, Clarence. Lloyd Martin then moved to the North Country and opened the family’s operation in Theresa in 1991.

Now, according to Lloyd Martin in an interview with The Telegram when the business changed hands once again to Josiah Martin, “it’s his turn.”

Josiah hopes to begin turning out pretzels, which are twisted by hand, in about a month, said his father, Moira Town Supervisor Justus Martin. The company built up a stockpile in preparation for the move but has nearly exhausted its supply, he said.

Martin’s Pretzels has garnered national acclaim not only from sales at New York City Greenmarkets, but also from several publications, including The New York Times and Vogue; a feature on the television show “Food Finds”; and an appearance in the movie “You’ve Got Mail,” with actor Tom Hanks.