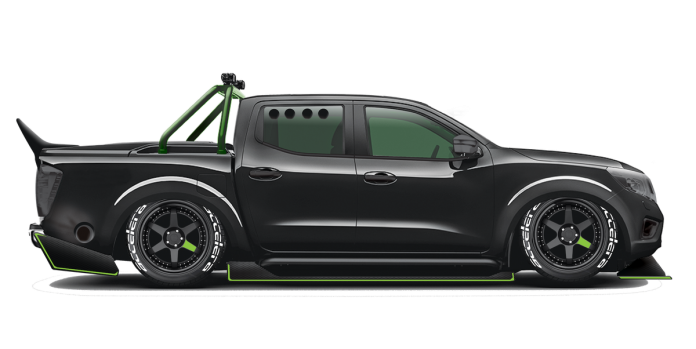 Creativity is a wonderful thing. People wake up one morning and decide that something that doesn’t exist, should. So they build it. Without these “I should really do that” moments we wouldn’t have light bulbs, the telephone, airplanes, LEGO, Pez dispensers, or even the automobile. Nowadays, as most of the “big” stuff seems to be out of the way, creative types spend their time improving on what’s come before. This is where we meet Stephen “Baggsy” Biagioni, professional drift competitor, demonstrator, and founder of SB Motorsport, a madcap English racing shop 50 miles east of London.

You may be familiar with SB Motorsport’s work already—mainly, the shop’s very drifty Nissan GT-R. This isn’t a standard car with the wick turned up—it packs a 454-cubic-inch Chevrolet LS V-8 with a Garrett turbo on board, kicking out 1200 horsepower and putting on one hell of a show.

It was while SB was building the drifty GT-R that Biagioni and team came up with an idea. See, to make the GT-R do what it does, the team needed to remove its drivetrain. And interior. And… everything, really. With all the bits hanging around, a plan was hatched: Why not make a GT-R into a truck? A really, really fast truck. And lo, the idea for the Nissan Navara-R was born.

Biagioni spent two years working on the idea for the Navara-R on paper. Development work started in November 2019, giving the team plenty of time to work out the intricacies of getting the whole setup to work properly. Building something like this isn’t a simple “throw the motor in and see what happens” job. The body has to be lifted from the Navara’s frame, the new motor and gearbox put in place, and all new KW suspension added to help put the ludicrous power down. “We’re adding everything to the frame. The Navara frame is in our booth, and we’re fabricating the front and rear subframes from the GT-R to fit that. It’s a bespoke build allowing us to use all the bits from the GT-R,” Biagioni said.

“In theory it’ll make the Navara handle like a Japanese supercar. It’s going to be slightly longer and slightly wider than a GT-R. There’s not much difference in wheelbase between the two.”

Taking a bog-standard Nissan Navara pick up and throwing GT-R underpinnings on board was never going to be an easy task. Plus, SB Motorsport is frequently busy competing and displaying its 1200 hp GT-R drift monster all over Europe most weeks. So the pickup truck project was something to be sorted during off-hours. Then, the world stopped spinning, and motorsports events were put on ice, leaving SB Motorsport with plenty of time to get to work on the Franken-truck. The build is currently underway, and they’re making plenty of progress.

“This project has always been in the cards for SB Motorsport, ever since our initial GT-R project,” Biagioni commented. “With racing currently on hold, this was the break we needed to revisit the idea and bring it to fruition.”

The Navara-R will use the GT-R’s all-wheel-drive system, a heavily-tuned version of its fearsome motor, and an overhauled gearbox. The team’s aiming for a 1000-hp final power output. The donor GT-R is a 2010 car that, before it was turned in to a drift machine, was a development car for the team’s suspension partners KW and ST Suspensions. The running gear itself has about 15,000 miles to its name. When the drift car was built, the unused bits were left in a box ready for… something. And that something turned out to be this.

The plan is to keep the Navara-R street-legal despite its ludicrous power and setup. This won’t be a bare-bones race car chassis with a truck body, either—Biagioni says all of the factory comfort and luxury items will remain functional. “I’m confident in our team here at SB Motorsport and honestly excited to see the development and work alongside our partners, who happen to be the world’s leading experts in their respected fields,” he said.

On the looks front, while the truck could have been kept standard as some sort of super-sleeper, Biagioni decided to go with a slightly meaner look to match the angry new powertrain. The idea isn’t to make the car look like it’ll rip your face off for simply looking at it funny, but to see what could result if Nissan offered a jazzier version of the Navara. Okay, the renders might not make it look like something your mother would zip to the shopping mall in, but it’s nowhere near as extreme as it could have been.

This is a deliciously ambitious build from SB. When it’s done, you could, in theory, head out for the weekly grocery run, pick the kids up from school, and rip a ludicrous quarter-mile, all in the same day. Like a Chiron with rear seats.

As well as its GT-R drift car, SB Motorsport specializes in custom building competition vehicles for paying clients. You tell them what you what, they’ll build it, and you can go sliding to your heart’s content. Whereas previous projects involved creating something recognizable around a race car chassis, the street-legal Navara-R involves using road car tech as a base and working around its limitations. A challenge, even for the pros.

The question is, why? Biagioni’s fairly frank. “We were crazy enough to take a really nice GT-R and turn it in to a fire-breathing V-8 drift car. We were left with a box of bits: the heart and soul, everything we love about a GT-R, and we wanted to use them. We’re doing this for three reasons. One, I like doing something that’s different that’ll expose the craziness that goes on in workshop. Two, I’ve spent time in America and love the pickup truck culture that we don’t have here. Three, if someone sees it and likes it, we can build one for ‘em. I think it’ll be the coolest truck on the road.”

If you want to keep tabs on the build, SB Motorsport will be giving live monthly updates on the Navara-R’s progress on Biagioni’s YouTube channel starting June 10th.

What you need to know in Sarasota-Manatee, Monday, September 14