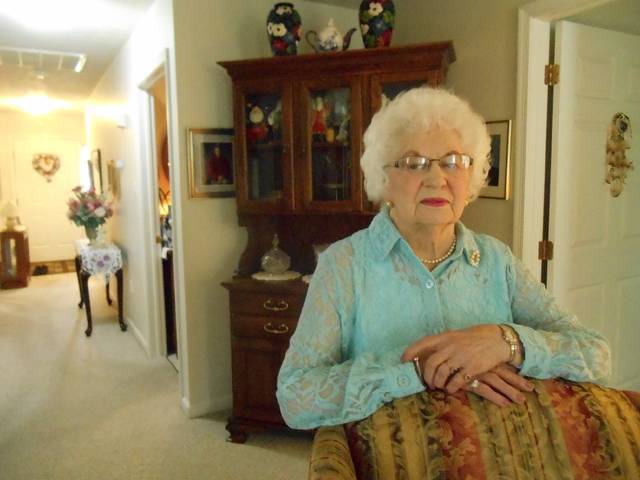 JENKINS TOWNSHIP — Helen Biles was astonished — and ever so delighted — when several of her neighbors at Brooks Estates in Wesley Village showed up in front of her house last week to sing “Happy Birthday” on the day she turned 98.

“I would say there were about 35, but I don’t know for sure,” Helen said Thursday. “I got 29 birthday cards, some that day and some through the mail, which is a lot for an old lady.”

Her brother and sister-in-law, Bud and Ann Ellis, happened to be visiting from Exeter on Helen’s April 17 birthday, and Ann captured a few photos of the singers on her cell phone.

“They might just think they did a nice thing and that, oh, it was fun,” Ann Ellis said later. “But it meant so much to (Helen). It was really wonderful.”

The birthday celebrant grew up on a farm near Oxbow Lake in Wyoming County as the fourth of nine children.

“We had cows and a horse,” she recalled on Friday. “I helped with the fruit and the vegetables we raised and I took care of my little sisters and brothers.”

Rose, Louis and Julia were older, Helen remembered. Albert, Ida, Esther, Mildred and Bud, whose given name is Elmer, were all younger.

Nowadays only Helen plus Esther, who is 90 and lives in Indiana, and Bud, who will soon turn 83, are still alive.

“I was 15 when I left the farm,” Helen reminisced, explaining that’s when the family moved to Tunkhannock.

During World War II Helen and her sister Julia, who was 2 and a half years older, went to Philadelphia to work at the Frankford Arsenal. “My section made the telescopes for Army trucks and tanks,” Helen said. “That’s where I met my husband. He was a supervisor.”

Helen and her husband, William, enjoyed 56 years of marriage before his death in 2005. They have two sons, Mark, who lives in East Hampton, Long Island, N.Y., and Robert, who lives in Palm Beach Gardens.

Their four grandchildren are Ryan, twins Colin and Lauren, and Patrick.

Great-grandchildren are Aiden, 3, and his new baby sister, Vivian, who was all of one day old when her great-grandmother turned 98.

If this were an ordinary year, instead of a time of restrictions because of the coronavirus pandemic, Bud and Ann would have taken Helen out to dinner for her birthday. Maybe they would have gone to Agolino’s Restaurant in West Pittston, Helen surmised, and she would have ordered “chicken Marsala. That’s my favorite. Then we would have come home to my house and they would have brought cake.”

Speaking of cake, Helen’s youngest brother, Bud, will be having a birthday very soon and Helen expects she might bake him a coconut cake, unless Bud and Ann insist on supplying a cake.

Helen misses being able to attend bingo in Old Forge, because of the necessity for social distancing, but she keeps busy reading Danielle Steele novels, cooking, listening to country music — and, thanks to her friendly neighbors, savoring the memory of one special-occasion serenade.

Bellevue store clerk attacked over mask: ‘They determined it was best...