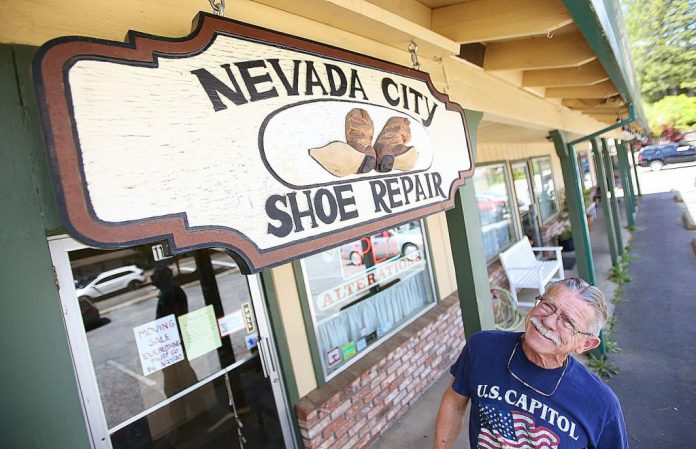 Much change is happening both nationally and locally as the pandemic takes hold over peoples’ lives. But some of those adjustments are less predictable than others, which is the case for two Nevada County shoe repair shops.

After about 33 years of business on Argall Way, Nevada City Shoe Repair owner Frank Pfaffinger, nearing retirement, is going mobile, converting his brick-and-mortar into a truck that will sit near his old quarters. Almost simultaneously, a new shoe repair store, Grass Valley’s OxVolk LeatherWerks & Shoe Repair, is currently open by appointment and will fully open in July, according to store owner and self-described older Millennial Jacob McDonald.

Reflecting on the past, Pfaffinger said that while there used to be many more shoe repair stores in the surrounding area, not much has changed locally in Nevada City’s 7 Hills Business District.

“Just people have changed,” he said. “It’s been an interesting ride. I’ve enjoyed it.”

Pfaffinger, who does repairs for shoes and other materials — like aprons, purses, belts and “just about anything leather” — is looking forward to the change. With the pandemic hanging overhead, the store owner, who planned to open his mobile truck this week, said the circumstances were hurting his bottom line, making it more difficult to make rent. Frank’s son, Justin, a dentist in Nevada County, said that his customers frequently note their excitement for Frank’s slightly modified venture.

Meanwhile, as Pfaffinger transitions, so is McDonald, who will operate his shop where Dave’s Shoe Repair previously sat.

McDonald — who grew up around ranchers and a community of crafters, and frequented the Oregon Country Fair — said he’s had a lot of experience in such fields as an apprentice in a Vancouver boot factory and as a student of shoe making with a scholarship from Oregon’s employment department. McDonald said he moved to Nevada County in 2013 to embrace its craft fairs and “community of makers.”

“I really felt like there was a kinship with the community,” he said, adding, “I’ve never made a community so fast as I did here.”

McDonald said he acquired a lease in early 2019 at 102½ Mill St., where he soon met Nicole Tomasetti, a previous worker for Dave’s Shoe Repair, who wanted to join McDonald’s operation.

Now, as McDonald readies his shop to open in the coming months, he wants the place — which will offer leather works, shoe repairs and custom accessories, like bags and wallets — to be a sort of “third space” in Grass Valley. That is, OxVolk will strive to offer good customer service, and invite those who simply want to peruse and chat, the owner said, hoping that people come to just hang out.

It’s that communal connection McDonald hopes to bolster, making it more likely that his work and his store last in the area for a longtime to come.