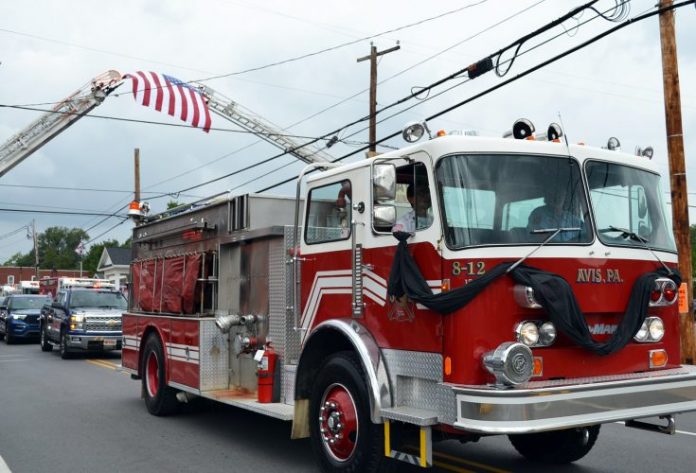 LANA MUTHLER / THE EXPRESS
Firefighters lift Closs from atop the engine and carry him into Grace Fellowship Church for his funeral.

David Closs was one of those guys you never forget.

He was a loving husband and father, a great friend and a dedicated firefighter.

When the fire call went out, he was out of the house and on his way in minutes.

He enjoyed being a volunteer firefighter and serving his community.

In his younger years, he’d suit up in firefighter gear, jump on one of the fire engines and hang on tight as the firetruck sped with sirens blaring to the scene of the fire.

Once there, he’d grab a hose and do whatever necessary to quell the blaze, saving homes and buildings… and even lives at times.

In his later years Closs suffered some health issues and stepped away from some of the action, leaving the “heavy lifting” to the younger guys.

But that didn’t keep him from answering the call. He’d direct traffic and take care of other less strenuous things that needed to be done.

Oh, being a firefighter was in his blood.

And ironically that’s how he died.

Some might say that’s perhaps how he would have wanted to leave this world — helping his fellow firefighters save lives and property.

It was Monday, Aug. 17, when Avis Fire Company was called to a fire in Jersey Shore. As always, Closs heard the sirens and responded, quickly taking an important role of directing traffic at one of the intersections as fire equipment came from every direction.

Nobody knows for sure what actually happened, but another call went out in short order from the communications center, reporting a pedestrian had been hit by a vehicle on Woodward Avenue in Pine Creek Township.

As it turned out, it wasn’t a pedestrian hit by a vehicle.

It was Dave Closs.

He suffered an apparent heart attack and was lying on the ground.

Closs, 67, was life-flighted to Geisinger Medical Center in Danville, where he died on Aug. 23, leaving behind his wife Cheryl, daughters Valerie and Angela, son David Jr. and five grandchildren.

He was an active member of Grace Fellowship Church in Avis and was often seen standing out front of the church welcoming folks on Sunday mornings, passing the collection plate, or counting the number of people in attendance at the service.

He also made sure there were mini-donuts or other treats at the coffee table for those missing breakfast on Sunday morning. The youngsters especially enjoyed the treats, often stuffing them in their mouths and running down the hall before their parents caught sight. Dave would just smile and take another drink of coffee.

Dave has touched the lives of many people as he’s traveled through life and has left a wonderful legacy of love, kindness and faith for those who knew him.

Most notably, his son, David Jr., has inherited his father’s joy in helping others and is following in his dad’s footsteps. He, too, is a member and past chief of the Avis Fire Co.

He’s learned a lot from his dad about life and firefighting. Father and son were seen together many times in the foyer at church, most likely sharing stories and talking about the goings-on of late.

It won’t be easy for this young man as he responds to the fire tones in the coming days.

He’ll be looking for his dad’s truck as he races to the fire station. He’ll be imagining his dad arriving and waiting for instructions on what his role will be on this call.

His thoughts will linger momentarily as he remembers the times he spent with his dad as they served the community together.

And, then in another instant, he’ll grab that heavy yellow fire coat, boots and helmet and run out of the fire station and take his place on the fire engine. His mind will shift to the emergency at hand as he wonders what to expect when they arrive at the fire scene. Then he’ll remember all his training and go to work helping to save somebody’s life or home.

Perhaps he’ll take a moment to glance up into the skies and smile, all the while knowing that his father is watching with approval and pride at what he has become … and softly whispering a portion of a familiar Bible verse — “Well done my good and faithful son.”

The Truth Behind The GMC Syclone