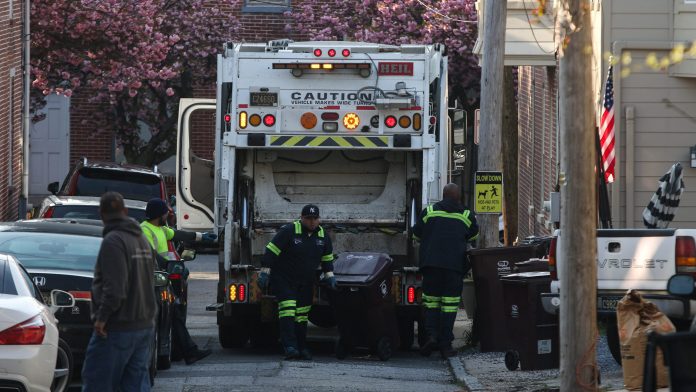 With many Wilmington residents stuck at home during the coronavirus pandemic, trash pickup day and the city’s sidewalks are revealing just how seriously people are taking the outbreak.

The load of household trash collected by city workers has climbed weekly since fear over the pandemic began in Delaware, according to Wilmington sanitation records obtained by Delaware Online/The News Journal.

Overall trash collection from curbs across the city has increased nearly 28% from the beginning of March – before the outbreak was confirmed to have reached the state – through the first two weeks of April.

Some routes have seen increases of more than 40%.

Gov. John Carney declared a state of emergency on March 13 following the first confirmed case of coronavirus in the state and more than a week later ordered residents to stay home.

Weekly averages of citywide trash climbed from 303 tons in February to 342 in March. In each of the first two weeks of April, sanitation workers hauled nearly 400 tons of trash from Wilmington homes.

Compared to March 2019, most Wilmington trash and recycling collection zones saw an increase in total amount
of household waste collected last month. This only includes routine garbage collection, not yard waste or extra pickups. Trash and recycling numbers are in tons.

LOOK AT THE DATA: Tracking coronavirus cases in Delaware

Collection routes that took workers less than 12 hours to complete on average before the pandemic are now taking more than 13, with completion times reaching 15 or 16 hours on some routes in late March and early April.

“You work like an animal to get it done,” said one sanitation employee, who asked for his name to be withheld because he was not authorized to speak to the media. “Now we’re getting it done and going out to another route.”

He started noticing increased loads when Delawareans began hitting the grocery store shelves to prepare for the pandemic. The worker said he suspects many residents are “putting out their spring cleaning because everybody’s bored in the house.”

THE LATEST: Delaware sees 10 additional deaths from coronavirus; victims range in age from 32 to 103

The employee’s route has seen a weekly trash load of less than 14 tons in early March increase to more than 19 tons the first week of April and 18 tons the second week.

With many city residents working from home, he said the blocks are parked full of cars, making it harder for sanitation workers to get garbage from the curbs onto the trucks.

One sanitation crew, the employee said, found a note on a resident’s trash bag telling workers to be careful because someone in the household had COVID-19.

“We kind of know it’s more than just the people that are telling you,” the employee said. “You know it’s there. You feel weirded out, but you gotta just block it out.”

Trash collectors with the City of Wilmington gather recycling in a Trolley Square neighborhood on Friday, April 17. They work fast, often running while they dump and return containers. (Photo: Jenna Miller/Delaware News Journal)

One sanitation worker is home after testing positive for the virus, three others are self-quarantined and one worker is on leave during the pandemic due to other health issues, the city said.

The employee said others have taken paid leave to take care of children who are home from school or family members who are ill.

Public Works Commissioner Kelly Williams said workers who fill in on other routes do so voluntarily and are paid overtime.

Last week, the employee said, the city began providing masks to sanitation workers, who already normally wear gloves. Only two of a three-member trash crew are driving to the route in the same truck, he said, to allow for some distance between crew members. The third worker is shuttled to the route separately.

Trash collectors with the City of Wilmington gather recycling in a Trolley Square neighborhood on Friday, April 17. They work fast, often running while they dump and return containers. (Photo: Jenna Miller/Delaware News Journal)

The city is also providing hand sanitizer and disinfectant, staggering shifts so fewer workers report for duty at the same time, cleaning all garbage trucks weekly, and taking workers’ temperatures before they report to work, according to John Rago, the mayor’s deputy chief of staff for policy and communications.

Williams asked the public to minimize placing extra bags outside the city-issued garbage bins, flatten cardboard boxes in the recycling bins and keep spring cleaning piles at home until the city can resume special pickups.

My job is to tell you stories of Delaware’s largest city, from city hall to your neighborhood. Your subscription helps me fight for public records, watch local government spending and spend time in your communities.