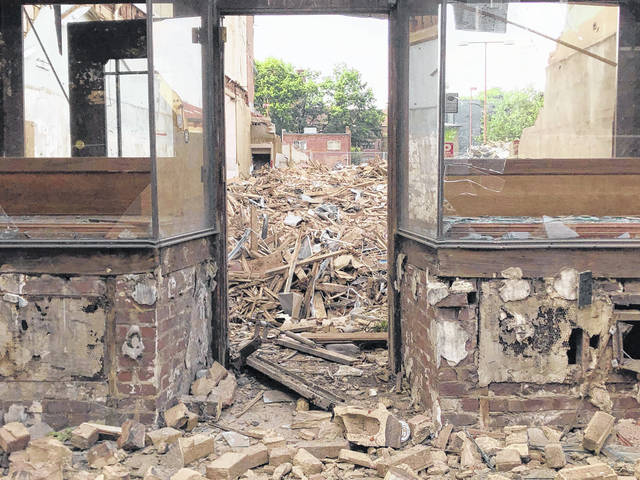 WILKES-BARRE — For Marilyn Palenchar, it was more than bricks, mortar, brass and glass.

The former Frank Clark jeweler building on South Main Street was a part of her childhood, and part of her family’s story.

“I was in that building from before I could even walk,” said Palenchar, whose father, Bernie Palencar — he dropped the H to accommodate English pronunciation from Slovak — spent a lifetime working at the shop, progressing from janitor to jeweler over a career that spanned more than 40 years.

All Palenchar and her family have left now are memories — both of those happy days, and of the building where they were made.

The storefront shop at 63-65 S. Main St. has been felled by contractors to make room for a new, high-rise hotel despite previous discussions by developer Sphere International LLC about possibly incorporating its distinctive facade into the project.

A Sphere representative previously said the facade preservation plan was too costly. Wilkes-Barre Mayor George Brown on Friday told the Times Leader officials said preserving the facade would cost $750,000, and they didn’t feel that would be economically feasible.

Instead, the plan now is to salvage as many of the historic elements of the 1913 building as possible and attempt to include them in the Avid Hotel according to attorney Jack Dean, who represent Flemington, New Jersey-based Sphere.

News of that development sent a ripple of sadness through many in the community, who took to social media and newspaper comment threads to remember the glory that was Frank Clark’s, and the shame that yet another piece of Wilkes-Barre’s history has met the wrecking ball.

“For me Frank Clark’s was a memory of my grandfather, who passed in 2012,” said Marcella Kester, who is Palenchar’s daughter and also a Times Leader corespondent.

“Every time I would drive by I would think of him and the stories he told me of his time spent there,” Kester added. “The daughter of a line of jewelers and a historic renovator, I often feel a connection and need to preserve our local history, however this particular event made it much more personal.”

Those who were engaged in talks to save the facade hope its demise can become a rallying point for initiating more formal efforts to preserve the city’s historic buildings.

“The building is down, what has been salvaged has been salvaged, and we’re going to make the most of it,” said Larry Newman, executive director of Wilkes-Barre’s downtown revitalization organization, the Diamond City Partnership.

“It also needs to serve as a wake-up call for a community that has been sleepwalking through this issue for the past three decades, if not longer,” Newman said of the city’s approach to historic preservation.

Wilkes-Barre is one of the few cities in Pennsylvania that does not provide municipally enacted protection for historic structures, Newman said.

Formalizing such protection is something he and others have been discussing for years — well before the demise of Frank Clark’s.

On Monday, Newman, City Council Vice-chairman Tony Brooks and a representative from the City Attorney’s office are scheduled to hold informal discussions about potential options for creating municipal protections for historic buildings.

It’s a discussion Newman and Brooks said was in the works well before the recent Frank Clark situation, and which will represent the earliest, most basic efforts toward such a goal — but it’s also a conversation both say has been long in coming.

“Since I got elected it’s been one of my priorities, because it is one of the things my residents want to see,” said Brooks, who was first voted onto the board in 2015 and who separately serves as director of the Wilkes-Barre Preservation Society.

Brooks explained that there are a number of different routes such efforts could take, including changes to the city’s zoning ordinance, and/or the creation of a Historical Architectural Review Board, or HARB.

Many communities across the state that have successfully adopted such approaches to preserve and enhance their historic structures, Brooks and Newman said, including the Borough of Huntingdon in Huntingdon County, and closer to home Bloomsburg, Bethlehem, Easton, Scranton and Lewisburg.

Huntingdon’s ordinance is one that Brooks said he expects to review as part of Monday’s discussion.

“There are a variety of different tools that state law makes available to municipalities that want to provide historic protection,” Newman said. “I am not necessarily a partisan for one or another. I want one that will do the job.”

“And this is not about what color to paint their porch,” Newman added.

Rather, he explained, it is a means of preserving “structures of unique or historic architectural interest or value,” an objective Newman notes is set forth in the city’s own comprehensive plan.

As Brooks pointed out, even a solid ordinance doesn’t offer absolute protection, but it would make tearing down historic buildings more difficult.

“Can you demolish then? Even if you have the most iron-clad ordinance it is doable, but it’s hard,” Brooks said.

That, Newman explained, would buy preservation advocates time when faced with plans to raze old buildings.

Mayor Brown said he would have to see the content of any proposed ordinance before commenting on it, but did say he promotes saving and restoring historic buildings as much as possible.

“But we have to make sure it’s something that’s doable — physically and economically possible,” Brown said of preservation efforts.

Happy Mother’s Day — and watch out for rattlesnakes | Editor’s...