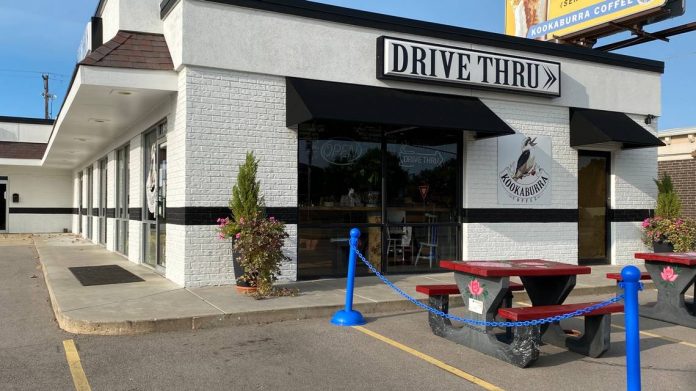 She’s not the first Wichita business owner to find herself in the middle of controversy and the subject of a protest during the politically-charged period since COVID-19 started and the Black Lives Matter movement re-intensified.

But the five days since Rebecca Fox and her Kookaburra Coffee shop at 9414 W. Central became viral social media fodder, she said she’s struggled to understand how it all devolved so quickly.

What started as a strongly worded sign on the door of her business warning people against harassing her staff over the city and county face mask mandates has become an entirely different debate about the role of police in 2020 and has resulted in her losing vendors, facing threats and learning that a protest would be staged in front of her business.

“I’ve been receiving death threats. I’ve had wives of police officers messaging me every day saying they hope something doesn’t happen to me after work, that my business doesn’t get burned down,” Fox said. “People have private messaged my mom, my family. People have sent hateful comments to my husband.”

Meanwhile, members of the group organizing the protest in front of the coffee shop, which is scheduled for 4-6 p.m. today, say that they’re fed up with people disparaging police and intend to make an example of Fox. Their “Blue Lives Matter” protest will be peaceful, they say, and they hope it will inspire other business owners to think before they speak — or post to social media.

The situation lays bare how tricky it is for business owners to speak out without fear of reprisal from passionate groups who oppose their stances on hot-button issues. B&C Barbecue, Nortons Brewing Company, The Kitchen and The Workroom have all in recent months gotten tangled up in tense exchanges that boiled over on social media. B&C Barbecue was also the site of a protest in June, when a group called Project Justice ICT demonstrated in front of the restaurant at 355 N. Washington, accusing the owner of making racist statements, which he denied.

Jessica Pereira, one of the Blue Lives Matter rally organizers, compared Fox’s actions to those of NFL players who kneel during the National Anthem as a political statement. They should just play football, she said, and everyone would be happy.

“I think it’s kind of blown up in her face,” she said of Fox. “If that were me, I would keep business and politics separate. I don’t know how that could possibly help her business.”

It all started on Tuesday, when Fox shared on her business Facebook page a photo of a sign she’d posted on the shop’s front door.

“If you are rude to my staff for enforcing our mandatory mask policy, I will post the video to social media so everyone will know you’re an a**hole,” it read, and Fox signed it.

Fox, who first opened her coffee shop as a food truck then expanded with her brick-and-mortar location last year, said that she finally lost her patience last week with people mistreating her staff.

She’d just learned of a regular customer who had “verbally accosted” a young staffer when she reminded him that masks were required to enter the shop. Both the city of Wichita and Sedgwick County have passed measures requiring masks indoors to fight COVID-19.

“Instead of complying, he advanced toward the counter and stood over her and screamed over the top of his lungs that Nancy Pelosi doesn’t wear a mask and that rioters don’t wear masks and we can’t make him,” Fox said.

Another customer who was meeting the man eventually got him to leave the store, but the incident left the employee shaken and in tears, Fox said. It was the second time that day that the employee had been attacked after reminding a customer of the mask mandate.

Fox said she felt she had to defend her employees. The photo she shared on Facebook went viral and was shared hundreds of times. Many commenters posted sentiments of support for Fox and the stand she was taking. But many others did not.

Not long after, someone dug back into Fox’s personal Facebook page and found posts she’d authored in May. In one, she shared a story about George Floyd’s death at the hands of police officers in Minneapolis and said, “Personally, I think there should be a vigilante out there bringing these ‘cops’ to justice. Let someone stand on their neck until they die while they plead for their lives.”

In a couple of others, she shared similar sentiments and wrote, “(Expletive) cops.”

They took screenshots and posted them to social media, and those also went viral, being shared over and over again.

Fox says she made the posts during the emotional aftermath of Floyd’s death. Those comments don’t reflect her true feelings about police, she said.

“People post stuff on Facebook that they don’t wholly support and that may have been made at a passionate moment,” she said. “I will admit that is not my outlook toward law enforcement. Not everything I said is something I will stand behind. It’s something I said when I was feeling passionate at that moment.”

‘Back the Blue’ rallies for police

Very quickly, Fox said, the conversation online stopped being about masks and how her employees were being treated and became an ugly fight about Black Lives Matter. That’s when she and her family members started receiving threats.

Among the people who saw the old Fox posts were Pereira and Melissa Stout, who founded a group called Wichita Rally- Kansas Rallies.

Stout said she started the group in 2017 as a response to the protests after President Donald Trump’s election. She got tired of “the hate and not respecting our vote,” and after being inspired by a nationwide MAGA march in support of Trump, she decided to form a Wichita group.

Since then, she and Pereira have organized about 16 rallies and protests — some in Topeka but most in Wichita. In the past, for example, they’ve rallied in support of the Second Amendment, in opposition to Wichita’s mask mandate and in favor of Wichita school athletes being allowed to play fall sports. Lately, they’ve been putting on “Back the Blue” rallies to support police during Black Lives Matter protests.

Pereira and Stout said that they became aware of Fox’s posts and were “furious.”

“We’re just trying to raise awareness and raise support and peacefully protest,” Pereira said. “We have no intention to be rude about it. We just want to come out and pray and show our law enforcement that we back them.”

Stout said that some members of their group wanted to go to the coffee shop and “kind of make a scene,” but she cautioned against that and recommended a protest instead.

The group plans to hold signs, have speakers and lead prayers outside the shop. They contacted the property owner in advance, they said, and they’ll clean up before they go.

As of Monday afternoon, 75 people had indicated on Facebook that they were going to the protest and another 464 said they were interested. Stout says she’s learned from experience to expect about half that number to actually attend.

Stout said that people should not be threatening violence against the police as a whole over the actions of a few bad seeds. Her son wants to become a police officer, she said, and there are plenty of good ones hard at work.

“We are not calling attention enough to the good officers out there that go out there every day and protect and serve us when we need help,” she said. “Even if you hate them, they will be there. But we’re vilifying all of them, and I just can’t allow that.”

Fox said that the people she’s heard from have been anything but respectful or peaceful.

Those who oppose her have pressured her vendors not to work with her, she said, and so far, she’s lost her kombucha distributor, and three local food trucks have said they’ll no longer set up outside her shop. A few local artists also have pulled out of the new marketplace she just opened next door.

She’s tried to reach out to some of her detractors to have a conversation about the topic, she said, but none have responded.

The organizers of the protest, meanwhile, say they tried to reach out to Fox through her property manager to have a sit-down but that she didn’t respond.

Her critics’ tactics aren’t making her more sympathetic to their cause, Fox said.

“If anyone was to change my mind on my negative outlook of law enforcement in the U.S., it certainly won’t be by berating me and my family and character and degrading my business and threatening my life,” she said. “It only makes me further view law enforcement and anyone related with them as a violent, hateful group.”

Her main hope is that it all blows over — and that customers stop berating her staff over the mask mandate.

Denise Neil has covered restaurants and entertainment since 1997. Her Dining with Denise Facebook page is the go-to place for diners to get information about local restaurants. She’s a regular judge at local food competitions and speaks to groups all over Wichita about dining.

Mangino column: The ongoing militarization of the police | Opinion

As panic buying slows, grocers look ahead at a post-pandemic world