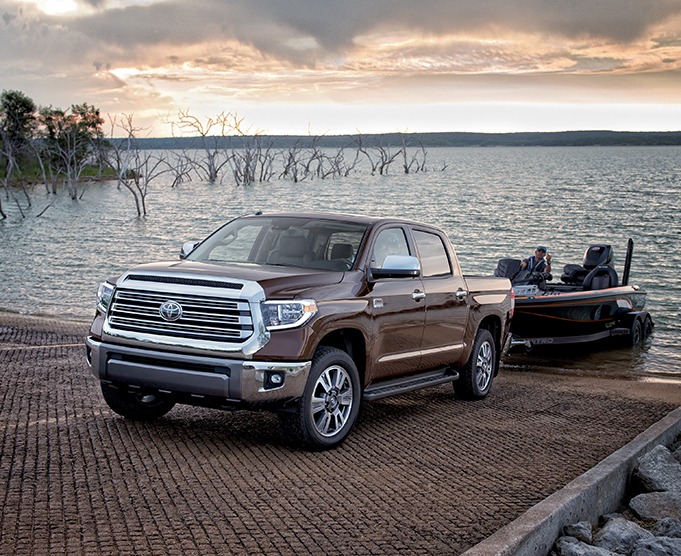 BOSTON — Americans buy millions of trucks every year. Even in the midst of a pandemic, folks are still buying trucks. In 2019, between all the various full-size truck models from Ford, RAM, GM, Nissan, and Toyota, we bought nearly 2.5 million pickups — and that doesn’t include all the smaller midsize models, which add another 600,000 to the truck total.

Nearly all of those truck sales are dominated by the big three of Ford, RAM, and GM, but there’s a not insignificant niche carved out by Toyota as well. The endlessly-popular Tacoma is the best-selling midsize truck, and the full-size Toyota Tundra has a loyal and dedicated following.

I know a few Tundra owners who love their trucks just as passionately as Ford and Chevy owners do. I’ve driven most of the pickups on the market, but I haven’t spent much time behind the wheel of Toyota’s big truck — and I was curious to see what Toyota was doing to compete.

My test unit was the premium, Western-themed “1794 Edition” that honors the founding of the JLC Ranch in San Antonio, Texas on which Toyota now has a truck assembly plant. Unsurprisingly, it’s the same plant that built this truck. 1794 is basically Toyota’s version of Ford’s “King Ranch,” only with less-impressive brand awareness.

It’s also not nearly as lux as those other trucks, but it’s certainly nice enough. Inside, there are “1794” accoutrements on the floor mats and the center console, plus wood trim on the steering wheel, dash, and gear shift. It’s very roomy, and things are laid out logically — which is a good thing considering how old the Tundra is. The interior was last redesigned the better half of a decade ago, and this generation of the truck is nearly old enough to enter high school. So, it’s a bit old, but aging gracefully which, perhaps, shows why Tundra owners like it so much. They know what they’re going to get.

One thing they’ll get is a lot of stops at the pump. The 5.7-liter V8 is extremely thirsty, scoring just 14 mpg combined city and highway, though the engine itself is buttery smooth and capable. Pushing 381 horsepower and 401 lb-ft of torque, you won’t have any complaints as long as fuel prices stay around two dollars per gallon. If prices shoot back up north of $4, it might be another story. The exterior is pleasing enough, with a giant big chrome grille on the front and special 1794 badging on the doors. The Tundra has aged well and was particularly striking in the brilliant Voodoo Blue coloring that my tester sported.

The interior is solidly dated compared to the competition, but it’s all functional enough. The 2020 edition of the Tundra gains Apple CarPlay and Android Auto, which is enough to get me to ignore the massive “Home/Apps/Audio” buttons that surround the screen.

With the competition launching enormous 12-inch-plus touchscreens, I don’t think Toyota will be able to wait too much longer before reworking this interior. In the middle console are numerous cupholders and storage cubbies, surrounding an enormous phallic shifter. There’s a massive center storage bin under the armrest, which will come in handy for those using their truck as an office. The rear seats have tremendous amounts of legroom, and the seats fold up to allow for more interior storage, though I wish the rear floor was totally flat to make loading Costco water bottles a little easier.

In the back, there’s a truck bed. It’s for putting stuff in. There’s nothing elaborate here with in-bed lighting or fancy tailgates like the GMC Sierra has. It’s just a truck, with a tailgate, that you can fill with things.

That’s perhaps the best way to describe the Toyota Tundra. It’s a pickup that allows you to haul things around. No fuss, no muss, nothing crazy. It gets you and your stuff from here to there, while slurping down massive amounts of fuel.

It’s a Toyota. You know what you’re getting. Enjoy it.

There’s a new player in the race to build the biggest,...