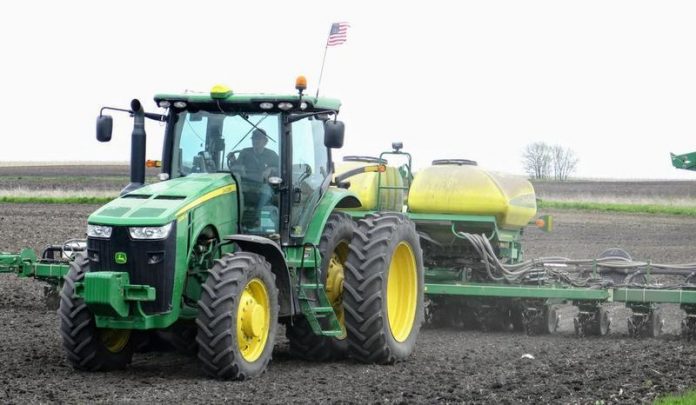 Follow the Haag family throughout the entire year. Each month, look for updates about the family members and the decisions they make on their farm.

EMINGTON, Ill. — The Haags were well ahead of last year’s planting pace before heavy rains hit the last couple of weeks.

Mike Haag said 95% of their corn and about 50% of their soybeans were planted as of May 21 on their 1,800-acre farming operation.

“We’re way ahead of last year. I had 80 acres in the ground until June 15 last year. We planted that 80 in April and then we didn’t plant another kernel of corn until June. Then we tried to plant all of the soybeans and corn in one week,” Haag said.

“I remember last year that corn planter didn’t shut off for five days straight. We’d pull it up and grease it, fill it with another body and keep it going.

“We’re sitting here at the end of May, we have corn barely out of the ground and a lot drowned out and people are going to have replant. There are a lot of issues there, too.”

As the Haag family anxiously awaits being able to finish planting, their focus is also on their pork production business that, like farms across the state and nation, has been impacted by limited processing capacity due to the plants’ full or partial closures. The facilities were forced to close after some employees tested positive for COVID-19.

Several plants have since reopened, but not fully staffed. When Haag’s pigs are market-weight ready, he ships them to Smithfield Foods in Monmouth for processing.

Haag took a break from his busy day to discuss the current situation.

How have these processing plant closures impacted your 17,000 head wean-to-finish hog operations?

“It’s important to understand how tight of a schedule most hog producers have in their barns. There are very few weeks that you can negotiate that schedule between the time you ship pigs and the time you get new pigs in.

“This whole process started 10 months ago when that sow was bred and that timeframe is pretty much locked into place give or take a week or two all the way through.

“All of a sudden our packer shuts down just like many across the country. Then it was like, whoa, what can we do feed-wise? I really felt our main farm was sitting at that 270-, 280-pound range when this thing hit.

“The nutritionists have been able to come up some rations that have done remarkably well at basically holding pigs in place. The one ration that I tried I swear it actually moved them back 10 pounds in a week.

What are you hearing from others in the pork production industry?

“I know there are some guys that aren’t going to be able to get out of this over the next month. In fact I’m hearing a number in the state of 200,000 pigs that are probably going to have to be put down sometime in the next 30 days. The industry here in Illinois, as it across the country, is in crisis mode.

“Plants have since been able to increase their capacities after the shutdowns, and it appears that nationwide we are about 70% of our kill capacity. The problem is that means we’re still losing ground.

“We have to get up to that 90% to even be breaking even with what we need to be moving. I know that most of these plants and their people are trying the best they can, too.

“The pandemic and the shutdowns in our state and nationwide has just caused unthinkable things to happen to the production system and purchasing system between the restaurants and the individuals. Nobody saw this coming. It’s just been devastating to a lot of industries and agriculture probably being at the forefront.”

What is the financial impact to producers as a result of this farm-to-processor bottleneck?

“It’s estimated that producers are now losing close to $70 per pig when they put them on the truck and it may be higher than that because some of these diets they’re feeding right now are fairly expensive and there’s no weight gain. It adds to the cost of those animals.

“To put it into perspective, if someone is driving down the road and they see a semi load of pigs going by, probably some farmer somewhere is losing $12,000 from that one semi load that’s going by. What’s going to market is above and beyond their expenses.

“We’re hearing more and more about pork producers’ ability to pay bills. Basically, we’re not getting our paychecks and the bills keep coming. We’re seeing a loss of income in the industry.”

If you were on a regular schedule, how many would you ship on any given week and how does this compare to what you’re now shipping out?

“We were right almost at two semi loads a week — about 340 head per week — on a regular schedule. I shipped two loads this week. I only got one load last week. I’m going getting one load next week. I had two or three weeks before where I didn’t have any loads. We couldn’t move anything.

“Right now, we’re about 10 to 12 loads behind our marketing plan and what I planned on having out the door. That’s important from an inventory standpoint and a logistics standpoint.”

There have been reports of nearly empty grocery store shelves, causing concern of overall shortages. However, there is enough food; it’s the bottleneck in the processing industry due to temporary facility shutdowns that have caused the problem.

“I’m hearing some outlandish beef shortage numbers where the price of beef has just gone through the roof at the grocery store, but I know cattle friends who are still not getting any more for the animals.

“Similar things are happening in the pork industry. The difference between the cost in the store and the price of what producers are getting are huge and grower further and further apart.”

The backlog of market weight-ready hogs that have no place to go for processing would force some producers to turn to depopulation.

“Producers spend their whole lives doing the best job they can of raising that animal and caring for it daily. If they are forced to destroy a bunch of these animals it will really crush a lot of producers that I know. That’s not what we’re about.

“We’re about making good, wholesome food, and it could be absolutely devastating for some producers both physically and mentally to have to go through this process.

“But the lockers are full. The industry is completely bottlenecked right now. And with the new guidelines that a lot of these plants have to open with, the idea of them getting back to 100% capacity is going to be a real struggle, much less to work through this backlog that we’ve had here, too.”

“We’re encouraging legislators to help fill a need there to these producers if they are forced to have to destroy these animals and deal with that. One of the things the CARES Act covered within $4.9 billion allocated to Illinois is for livestock depopulation. Livestock depopulation is listed in the expenses of what that money can be used for.

“If there are 200,000 pigs that have to be destroyed in the upcoming months, the mortality management alone could cost $4 million in Illinois. Nationwide we know they are 4 million pigs behind.

“So, whether they can catch up and get some of them through the system someway, somehow, hopefully they can. It’s definitely going to help some producers, but it’s not going to be a saving grace either.”