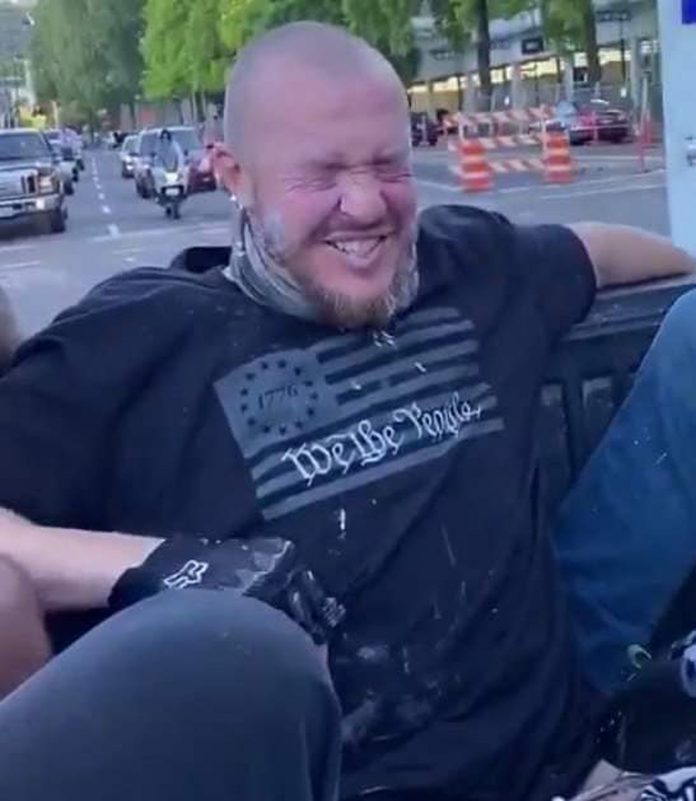 Aaron “Jay” Danielson planned to head out of town and into the woods last weekend for an early celebration of his 40th birthday but decided instead to take part in a pro-Trump demonstration with friends.

He had gone to a pro-police demonstration in Camas on Friday night and then joined a car caravan Saturday organized by an Idaho supporter of President Donald Trump.

By the end of Saturday, Danielson was dead on a downtown street of a gunshot to the chest. He was killed by a gunman after an apparent chance meeting on Southwest Third Avenue.

Police have made no arrests in the case, but law enforcement sources said they are investigating a man seen attending many of the demonstrations decrying police brutality and systemic racism after George Floyd’s death in Minneapolis.

Friends said this week that they don’t know why Danielson passed up the chance to go camping. He loved nature and was an avid outdoorsman but had also been tracking the protests, they said.

“He loved to go to demonstrations,” said Joey Gibson, the leader of Patriot Prayer, the loosely organized right-wing group.

Photos of Danielson after he was shot showed him wearing a Patriot Prayer ballcap. Gibson said Danielson was a supporter of the group but kept a low-profile.

The two were together Friday night and Saturday.

Those interactions were “usually friendly,” Gibson said in a text message to The Oregonian/OregonLive.

Among those present at the Camas gathering was Michael Forest Reinoehl, 48, the man under investigation in the fatal shooting.

It’s unclear if Reinoehl exchanged words with Danielson that night. On a video shared on social media, Reinhoehl can be seen speaking with people at the event.

The next day, Gibson and Danielson were among those who took part in the caravan into Portland.

In a video shot in the parking lot of the Clackamas Town Center mall before the caravan got underway, Danielson was seen wearing a backpack, gloves and appeared outfitted with protest gear. Friends said Danielson had a canister of bear spray with him but wasn’t carrying a gun.

Caravan organizer Alex Kyzik and other event organizers urged attendees to carry guns, though not to do so openly.

Patriot Prayer has been at the center of multiple Portland demonstrations in the past that have often ended in violent clashes with anti-fascist opponents.

Tensions rose almost as soon as the car rally began. The line of trucks and cars eventually made its way into Portland, many flying U.S. flags, Trump flags and Thin Blue Line flags.

Clips of Danielson posted to social media by his friends and associates show him in one of the trucks with Gibson and others.

At one point, Danielson’s friends are seen in another video trying to wash his eyes. Gibson on Wednesday said that the truck had been sprayed with pepper spray.

In another video from the same ride, Danielson sat next to Gibson, a gas mask atop his head.

A video shot by The New York Times shows participants in pickups adorned with Trump flags firing paintball guns and pepper spray into the crowds on downtown Portland streets.

In a video posted to his Facebook page, Gibson said he rode into downtown Portland with Danielson and then he left. He said Danielson and Pappas were in downtown because Danielson lives nearby.

Around 8 p.m., Kyzik, the organizer from Idaho, posted calls for conservative activists to leave Portland.

About an hour later, Danielson was shot.

A witness and livestreamer, Justin Dunlap, said he was walking south on the east side of Third Avenue and about to cross the Alder Street intersection when he heard shouting. He said he saw a man later identified a Danielson “pull something up from his hip with his right hand and a big cloud of mace goes in the air.”

Dunlap said a half-second later, “there were two pops” of gunfire and Danielson stumbled, then collapsed.

Gibson said it appears to him that the shooting was unprovoked. “They were not agitating,” he said on his Facebook video.

Gibson wasn’t present at the shooting but said he’s viewed widely shared video of the scene and heard Pappas’ account. Based on that, he said he believes the gunman’s first bullet nicked a canister of bear mace that unleashed “a cloud” of gas and the second bullet hit Danielson.

Stephanie Wilcox, 37, a longtime friend of Danielson’s, said he had planned to go out of town last week but opted instead to take part in the demonstrations.

She said Danielson had gone to Portland protests the week before he was killed.

“He was a watcher,” she said. “He liked to watch and take videos. He was not one to start a fight or get loud in somebody’s face.”

She said Danielson told her he had been sprayed the previous week from behind. She said he texted her a photo from the event.

She said Danielson was a Trump supporter but the two didn’t talk politics much. She said she didn’t know how he became involved in Gibson’s group.

He was known by his friends as Jay or Jay Dailey.

Danielson was mistakenly identified in some initial press reports as Jay Bishop. Multiple friends of Danielson’s said he never used the surname Bishop.

Friends say he was raised in Spokane and was close to his parents, who are divorced, and sister. His family lives in Washington and has declined to say anything publicly since his death.

Wilcox doesn’t know why he decided to skip his outdoor plans.

She said she reached out to him last Friday by text. She said she told him she worried about his safety.

“That was literally the last thing I said to him,” she said.