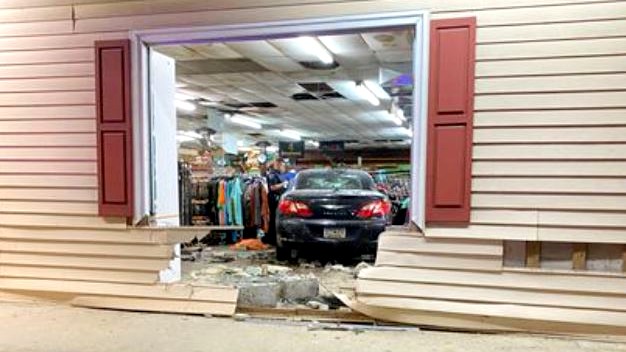 This is what Woody’s Pawn and Jewelry Shop looked like after a car rammed into it.

ORANGEBURG, S.C. (WIS) — In the city of Orangeburg, a local business is quite literally putting back the pieces.

Holman, spent a good deal of time Sunday fortifying his store for a potential break-in. He woke up at two Monday morning with a sick feeling inside his stomach. Less than an hour later, someone drove a car into his store. His nightmare became a reality.

An alarm notified Holman in the early hours, signaling a break-in at his store. Holman and his wife raced to the scene.

IN AUGUSTA | A truck has slammed into the Olive Road overpass again.

“I pulled up and saw that sight, lights flashing, police everywhere, showcases busted, it was one of the worst feelings in the world,” Holman said.

The chief of the Orangeburg Department of Public Safety, Michael Adams, says someone stole this vehicle Thursday and used it to ram the store Monday morning. Firearms were taken. Property damaged incurred estimated to be in the thousands.

“I was angry,” added Chief Adams. “I know Mr. and Mrs. Holman. They’re good people. It turns into a sense of determination to help them find justice and get those weapons off the street.”

“I consider myself lucky that no one was hurt,” added Holman.

Chief Adams and Holman are longtime friends. The two discussed a potential break-in scenario on Sunday. They did so because of what happened in our state with the riots and looting

“Wish I could have looked into my crystal ball and saw it was going to happen that night,” said Chief Adams. “Historically, when you have civil unrest, there are typically areas of concern and businesses of concern.”

Chief Adams does not suspect protesters from Sunday night’s vigil at Prince of Orange Mall in Orangeburg were involved.

Back at the scene, with stolen firearms, multiple law enforcement agencies are actively seeking to retrieve them. Adams added all missing guns had been identified and entered in a national database. And, they’ve gathered evidence to find who committed this crime.

“To the folks that drove the car in here, we’ll probably be seeing you soon,” said Chief Adams.

In the meantime, both Holman and his wife call for unity in the town they hold dear.

“Orangeburg means everything to me,” said Holman. “It’s my home. This foolishness has got to stop. Don’t be so hostile. Get along with everybody.”

Chief Adams told WIS several different law enforcement agencies are working in Orangeburg day and night to keep everyone safe. He adds the most crucial part besides presence, community outreach, and open communication with local leaders and civil rights groups.

Chief Adams did detail two other incidents near the site of the protest. On Sunday night, there were store break-ins at the Prince of Orange Mall and a sporting goods store at the old Orangeburg Mall. No arrests yet have been made in connection to these crimes.

‘The car you buy because you love driving’ – The Virginian-Pilot...