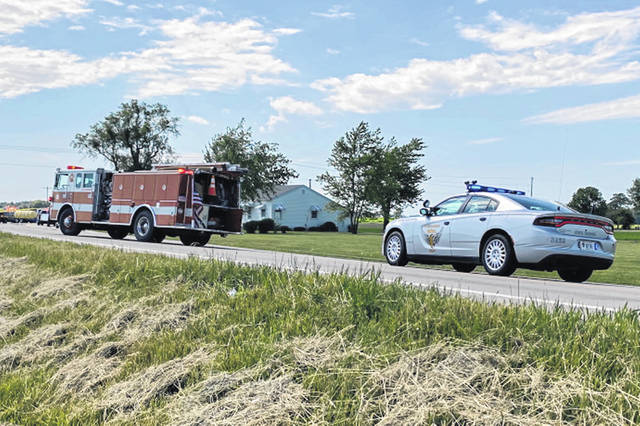 At approximately 3:32 p.m., emergency personnel from the Union City Fire Department, Union City Rescue, Ansonia Fire Department, Ansonia Rescue and Careflight were dispatched along with deputies from the Darke County Sheriff’s Department and the Ohio State Highway Patrol to the intersection of State Route 47 and Coletown-Lightsville Road in reference to a serious injury accident involving a motorcycle and pickup truck.

According to a press release from the Darke County Sheriff’s Office, a preliminary investigation into the incident has revealed a red 2009 Dodge 3500, driven by 22-year-old Levi Livingston of New Weston, was traveling eastbound on State Route 47 approaching the intersection at Coletown-Lightsville Road.

Livingston made an attempt to turn northbound onto Coletown-Lightsville Road when he turned into the path of a westbound black 2019 Harley-Davidson motorcycle, driven by 55-year-old Douglas A. Shaneyfelt of Union City, Indiana.

Livingston was treated and released from the scene after refusing any further treatment and transport to a medical facility.

Both Shaneyfelt and his passenger, 48-year-old Hope Shaneyfelt of Union City, Indiana, succumb to their injuries and were pronounced dead at the accident scene. The Shaneyfelt’s were not wearing helmets at the time of the accident.

This incident remains under investigation by the Darke County Sheriff’s Department. The Beautiful and the Damned

Islanders, Flyers gear up for Game 7 with free trip to...