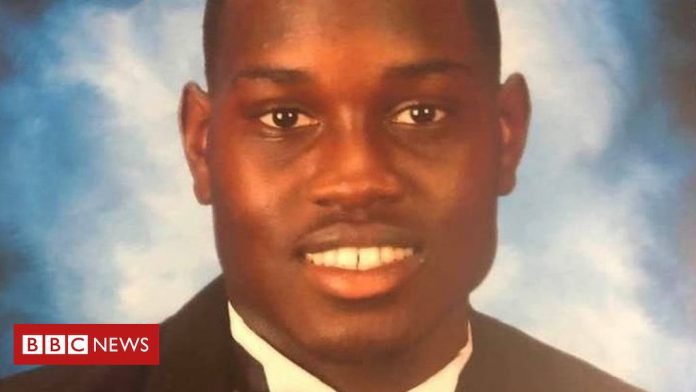 A father and son have been arrested and charged in the US state of Georgia for the fatal shooting of Ahmaud Arbery, an unarmed black man.

They were both charged with murder and aggravated assault, investigators said in a statement.

Mr Arbery, 25, was jogging in February when he was confronted by the pair.

The failure to bring charges against the McMichaels, who are white, in the weeks after the shooting provoked widespread outrage.

The Georgia Bureau of Investigation announced late on Thursday that both men had been taken into custody.

The bureau said the father and son had confronted Mr Arbery with two firearms, and it was the younger McMichael who shot and killed him.

How did Arbery die?

Mr Arbery was out running in the coastal city of Brunswick early in the afternoon of 23 February.

In a police report, Gregory McMichael says he saw Mr Arbery and believed he resembled the suspect in a series of break-ins.

He and his son armed themselves and pursued him in a pick-up truck.

In the police report, Gregory McMichael says he and his son had said “stop, stop, we want to talk to you” and that Mr Arbery had attacked his son. Shots were fired, with Mr Arbery falling to the street in the Satilla Shores neighbourhood.

Mr Arbery’s mother, Wanda Cooper Jones, said police told her her son had been involved in a burglary before the incident, but the family say they do not believe the keen jogger had committed a crime and he was unarmed.

A number of calls were made to the emergency services around the time of the confrontation, CBS reports. In one 911 call, a neighbour said a black man was seen at a home under construction in the area.

When asked what the man was doing now, the caller said “running down the street”.

What evidence is there?

A video taken by another man in the neighbourhood appears to show the McMichaels waiting for Mr Aubery as he jogs down the road in broad daylight.

The 36-second clip was shot from a vehicle following the pick-up truck said to be involved in the incident.

It shows a man jogging and then approaching the stationary pick-up from behind.

He tries to bypass the truck and then is seen struggling with a man carrying a shotgun. There is muffled shouting and shotgun shots are heard.

A second man is standing in the bed of the pick-up. The second man is then shown with a pistol standing alongside the other armed man with the jogger no longer in view.

What is the Arbery family saying?

The victim’s father told PBS Newshour on Thursday that his son exercised in the area daily and stayed across the street at his mother’s house.

“I don’t know why they racially profile him and done him like that,” said Marcus Arbery, “because all he did is work out and ran and just took care of his body, because he had dreams now.

“Now all his dreams are gone, because they took his life for nothing.”

Asked about the suggestion that his son could have been implicated in a burglary, Mr Arbery said that was “just a lie and a cover-up”.

“The video speaking everything for itself,” he said. “Check that lynch mob out.”

The attorney also claimed Gregory McMichael was not initially charged because he had worked as a police officer and a detective for the local district attorney for over 30 years.

Police make it easier to get pickup plates