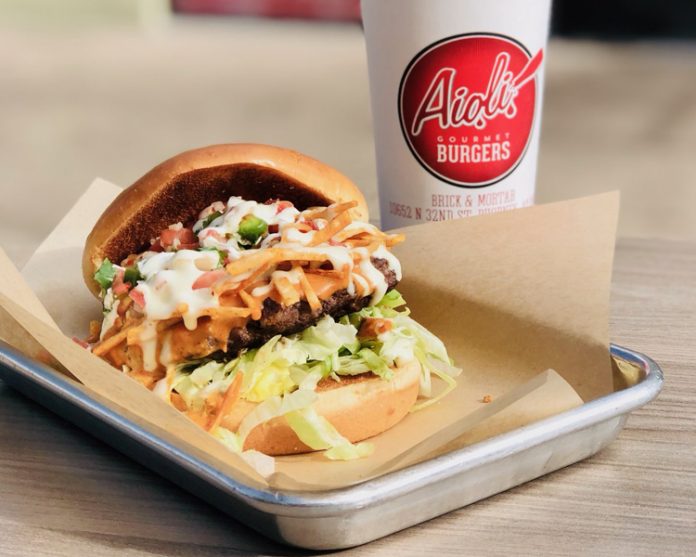 “The last six months have been a crash course in creative entrepreneurship. Finding our way through this coronavirus pandemic has been a true test of our resilience and determination to succeed. We’ve reinvented ourselves several times during this crisis and it has proved to be an amazing experience and time of growth for everyone at Aioli Gourmet Burgers,” said Kyle Hollenbeck, Co-Owner, Aioli Gourmet Burgers.  “We opened one store during the pandemic and now we’re excited to have the opportunity to expand again.”

In addition, the third Aioli Gourmet Burgers location will feature an art gallery showcasing a collection of work of award-winning latinx cartoonist, John Carvajal. The collection includes Arizona, food truck and burger inspired pieces. All of the art on display will be available for purchase. The team at Aioli hope to be able to feature many local and nationally recognized artists.

Open since 2013, Aioli Gourmet Burgers started as a single food truck, quickly growing with the addition of one more food truck each year since then. The original restaurant location was opened in 2016 at 32nd Street & Shea off the 51 Freeway. That location has served as the brand’s home base for the past three-and-a-half years.

The restaurant group is led under the culinary direction of Chef Tommy D’Ambrosio, who, from a young age, had a passion for cooking. Combining differing flavors to make one-of-a-kind culinary creations, Chef Tommy was inspired by his grandmother, and having a huge Italian family- cooking and eating was a big part of his life.

Chef Tommy went to the Culinary Institute of America and completed an apprenticeship at The Greenbrier in West Virginia before returning to his hometown in Phoenix to open Aioli Gourmet Burgers. Tommy opened Aioli with two of his childhood friends, Kyle Hollenbeck and Michael Cartolano.

Chef Tommy is a Chopped champion, he’s competed at the World Food Championships, and has won numerous awards including the Scottsdale Culinary Festival’s Burger Battle several years running. Aioli Gourmet Burgers has won the Phoenix New Times Best of Burger award for the past three years in 2017, 2018, and 2019.