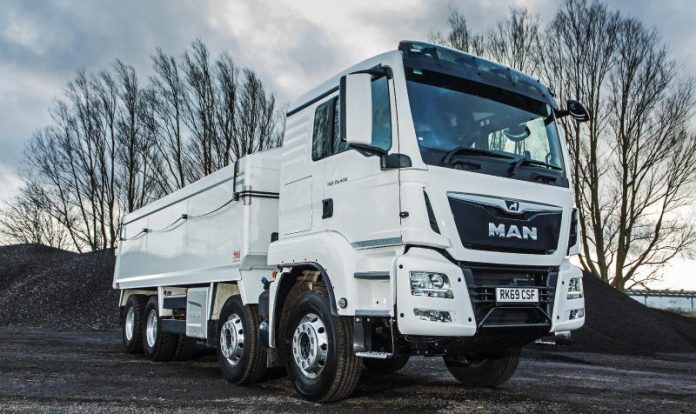 The ­first thing we spot on arrival is a full set of Alcoa Dura-Bright EVO wheels, the obvious place to start a vehicular diet. But the next place is under the cab with MAN’s D15 engine, which was released last summer as the ­first in the manufacturer’s new Euro-6d engine line-up. A 9-litre engine, it replaces the 10.5-litre D20 and, while producing the same amount of torque as its predecessor, comes in around 230kg lighter. Part of the saving comes from an improved exhaust after-treatment system – dispensing with the EGR – making this an SCR-only engine.

In basic terms, to get the best bang for your buck you need combustion to take place at high  temperatures, but that produces more NOx. Adding EGR sorts out the NOx but lowers combustion temperatures so reduces the power that can be extracted. Ditching all that in the D15 means MAN has been able to keep down the physical size of the whole engine.

Another 70kg has been lopped off by use of a single-stage turbocharger – the lack of EGR means the twin-stage turbo needed by the D20 is unnecessary. And it’s got what is, to all intents and purposes, a plastic sump. All of these changes are claimed to give an improvement in fuel ef­ficiency of 2% over the D20.

Next comes the body, which has been supplied by aluminium specialist bodybuilder Aliweld – run by Toby Welch and Trevor Marshall just down the road from Gateshead in Ryton. We call in and find them both in their overalls and covered in evidence of their hands-on approach to the business. They know which vehicle we are talking about as soon as we mention it. “We’ve got customers waiting for that on demo!” Marshall immediately pipes up. He disappears to find the paperwork from the build, leaving Welch behind to chat.

“It’s got an Edbro CX14 ram on it, which is the lightest of them all and still carries a three-year warranty,” he enthuses. “And our bodies now are made with 8mm thick one-piece flooring in Dural, which is the hardest aluminium in the marketplace.

There’s no other bodybuilding company in the UK that does that.”

The sides of the body are 4.2mm thick and 4ft high – the standard for this part of the country – and insulation is provided by a simple air pocket. Some bodybuilders use a fibre filling in the walls, but Aliweld prefers not to. “The problem is it gets wet, and then it falls to the bottom of the cavity,” Welch explains. “So, in time, it’s not doing what it’s supposed to, and the bodies end up bulging out.”

Marshall returns with the ­ le and joins in. “The air pocket acts like a thermos ‑ ask,” he explains. “The Tarmac’s red hot, the air inside the cavity warms up and reflects between the inner and outer skins, which in turn keeps the temperature of the product higher for longer.” This, we’re told, is a tested and proven principle. One of the larger operators in the road business conducted a 10-year trial of all the various body insulation options, including Rockwool and polystyrene slabs, and after extensive studies concluded that air pocket insulation was most effective. “We said ‘we told you that in the beginning, before you started!’” Marshall chuckles.

Coronavirus: When will dining rooms reopen? For L.A. restaurants, the wait...