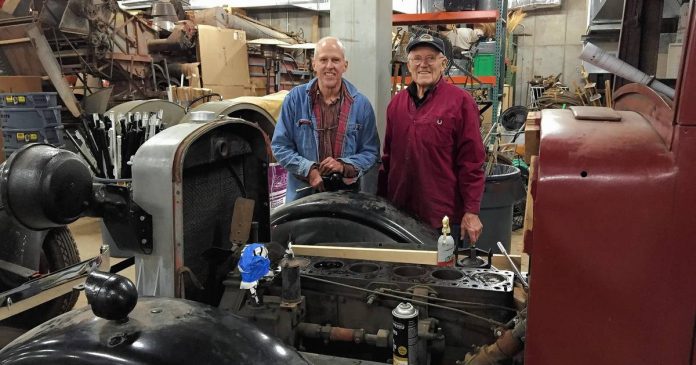 Piece by piece and part by part, a unique Northbrook/Glenview artifact is being reborn at Wagner Farm.

Many already know the early history of the Reiland & Bree Truck Factory that operated during the 1920s and early 1930s at the southeast corner of Waukegan Road and Walters Avenue in Northbrook. It is the more current history of one special R&B truck that owns the spotlight now.

But first, an early history review.

Peter Reiland was a longtime Glenview resident who had his own horseshoeing and machine repair shop in Glenview before moving to Northbrook. Nick Bree operated his nursery at the southwest corner of Waukegan and Walters, across from the eventual R&B factory. According to “Northbrook, Illinois: The Fabric of Our History,” the two joined to create a sort of after-market operation that “made trucks by purchasing the components such as engines, chassis, etc. and assembling them in Pete’s garage … (then) they set up a machine shop and truck assembly building behind Pete’s home with an entrance off Walters Avenue.”

During its run nearly a century ago, Reiland & Bree sold trucks to the Northbrook and Glencoe fire departments, the Village of Winnetka, the Lutter Brick Company in Glenview, and the Great Western Baking Company in Chicago, among others. However, apparently none of those vehicles remain. In fact, only one R&B truck has been found to still exist — the one purchased in the mid-1980s from the Rustic Man Fence Company in Glenview by Jay Lorenz, whose family owned and operated Northbrook Garage for more than 160 years.

Lorenz eventually took the various R&B truck parts that were left to Spring Grove, in McHenry County, where the vehicle was assembled as a non-drivable museum piece and then generously donated to the Northbrook Historical Society in 2011.

But with no display space for an 8,000-pound truck, the Historical Society accepted an offer from longtime Northbrook resident Burton Bucher to store the truck in a North Chicago warehouse.

Last year the Glenview Park District asked if the R&B truck might be available to join a historic vehicle display at October’s Fall Harvest Festival at Wagner Farm. John Meyer and Grosse Pointe Towing moved the vehicle to Wagner, and for the first time in decades, area residents got to see the Reiland & Bree truck.

That is when the “current history” really began.

According to Northbrook Historical Society Vice President Mo Anderson, the story of the truck attracted the interest of a few people who now have basically made it their goal to get the R&B relic not only completely rebuilt … but running as well.

“Our volunteers range from 13 to 85 years old, and what an amazing group of people they are,” said Anderson, who has been keeping the project moving along since last fall and also has done such tasks himself as rebuild the brake system, reassemble the cab, and get the doors to function.

Martin Cobb, Woody Hansmann, and Jeph Harrison have been key contributors to the project.

Cobb “has made a substantial donation of his time, talents, and resources,” Anderson said — including disassembling the motor, rebuilding the carburetor and cylinder head, and “securing the missing intake manifold that had stymied this project for decades.”

Hansmann “has touched every aspect of this project,” Anderson said. “He refurbished all of the lights, completely rewired the truck, fitted all of the piston rings, honed the cylinders, and most importantly freed the engine that was stuck for at least 40 years.”

As for Harrison, “He has skillfully recreated all of the wooden oak structure needed to make the truck drivable again,” Anderson said. “At least 75% was badly rotted and unsalvageable.”

The list of volunteers also includes Paul Spanier, who has worked on door latches, window mechanisms, and lighting repairs. Sam Weiss has helped repair the cylinder head and exhaust. Al Hirsch and his staff at AA Service Co. Heating & Cooling have fabricated a metal roof. “Old car experts” Jim and Andy Stockinger have brought their experience to the project while also rebuilding the vacuum wiper motor as well as locating the source for an elusive head gasket while at a swap meet in Pennsylvania. Clyde McFaul of McFaul Upholstery has volunteered to make the seat. Joe Krupinski has done some piston repairs. Jonathan Wang, a New Trier senior; Patrick Ryan, a Glenbrook North sophomore, and Keith Hansmann, an eighth-grader at Roosevelt School in River Forest, also have gotten involved.

Without the assistance of the Glenview Park District and Wagner Farm, all this work likely never would have started, Anderson said. Todd Price, Superintendent of Leisure Services, helped get things rolling originally, and Wagner Farm Director Jonathan Kuester has continued to offer support … along with a perfect place to work.

Hopefully, all the effort will pay off at a not-too-distant date when the truck, once little more than a display shell, becomes road-worthy — and a likely participant in various Northbrook and Glenview parades.

Northbrook Historical Society Treasurer Bill Nemmer’s research has turned up no other Reiland & Bree trucks registered in Illinois — and apparently none registered during at least the past two decades. So right now, this R&B creation looks like “one of one” remaining.

As Nemmer remarked recently regarding the amazing way the volunteer rebuilding project has evolved at Wagner Farm, “This may be one of the few positive things” that has come out of this whole time period during the pandemic.

For more information about the project, contact the Northbrook Historical Society at (847) 498-3404.