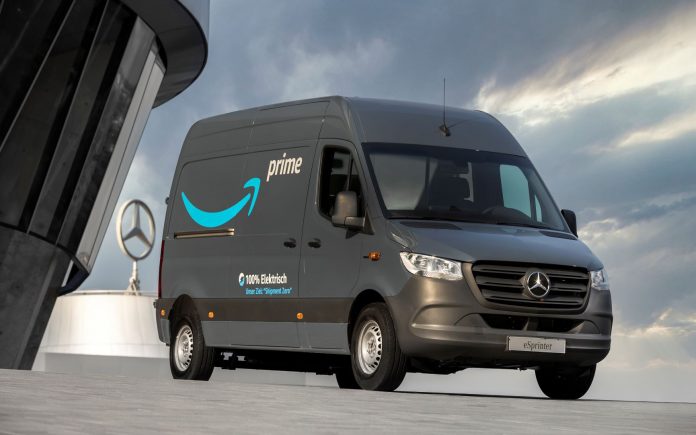 Amazon may have inked a deal with startup Rivian to build it 100,000 electric delivery trucks, but the retailer isn’t waiting around for the zero-emissions van. Mercedes-Benz is set to deliver 1,800 new all-electric delivery vehicles to Amazon, for use in Europe, as it tries to tame the emissions from its fleet.

The order is the biggest so-far for Mercedes-Benz Vans, and will be completed over the course of 2020. It came as the automaker also signed up to The Climate Pledge, with the commitment to be net zero carbon by 2040. That’s a decade ahead of the requirements set forth in The Paris Agreement.

The remaining roughly 600 vehicles will be Mercedes’s eVito. A midsize van, it’s smaller than the eSprinter and will be used in areas where the larger model might be too large.

For Amazon, it’s a sign of how the shopping behemoth is hedging its bets when it comes to the growing need for electrification. The company has participated in several rounds of investment in Rivian, the American EV startup which plans to launch an electric pickup truck and SUV next year. Eventually, if all goes to plan, Rivian will produce 100,000 of its specially-designed delivery vehicles to Amazon, with a number of different configurations to suit the size, range, and traction demands presented by different areas of operation.

For larger, more spread out areas, for example, there’ll be a large battery option for maximum range and a bigger capacity body. Urban deliveries, meanwhile, might be better served by a smaller body that would be potentially more nimble, and be satisfied by the range provided by a smaller battery. All-wheel drive will be available for areas where inclement weather makes it a priority.

Amazon has also been testing vehicles from other companies for electric deliveries, though this Mercedes deal is believed to be one of the largest to-date. As for charging the EVs up, Amazon says it’s on track to use 100-percent renewable energy by 2025.

Grille Guards Market 2019 | How The Industry Will Witness Substantial...

1997 GM EV1 Proves to Be the Start of Something Big