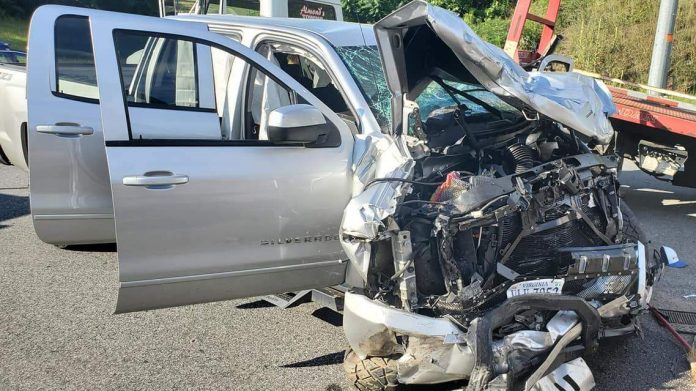 AMHERST COUNTY, Va. – Virginia State Police is investigating a police chase in Amherst County that ended in a multi-vehicle crash that sent three people to the hospital.

It happened on Wednesday at about 5:45 p.m. A deputy tried to pull over a silver pickup truck that was speeding on Seminole Drive, but the driver sped away to elude the deputy, according to the Amherst County Sheriff’s Office.

After giving dispatch the vehicle information, the deputy learned the registered owner was wanted on a felony charge out of Chesapeake.

Meanwhile, the silver pickup truck continued speeding down several roads, eventually running a red light on Dixie Airport Road where it intersects Highway 130, according to the Sheriff’s Office.

The silver pickup then hit a maroon pickup truck, which was pushed into a deputy’s vehicle. The maroon pickup also slid into another car that was stopped at the intersection.

The deputy whose vehicle was hit was taken to a hospital, as well as the driver of the maroon pickup truck and silver pickup truck.

The driver of the silver pickup, Joshua Finnegan, is facing charges for felony eluding and reckless driving. He was also arrested on a narcotics charge out of Chesapeake, according to the Sheriff’s Office.

The deputy who was hurt has been released, and Finnegan was released from the hospital to Blue Ridge Regional Jail. The Amherst County Sheriff’s Office said the deputy checked on the driver of the maroon pickup truck before leaving the hospital, but his name hasn’t been released.

‘Up to SIXTY bodies’ of coronavirus victims ‘found in trucks’ at...