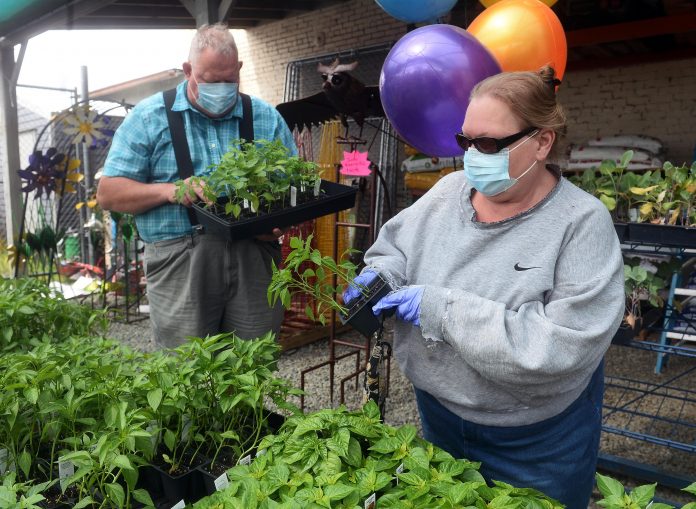 The garden soil and topsoil and seed potatoes have been moving at three times their typical rate at Mebane Shrubbery market in Burlington, while the general manager at Colonial Hardware shop in Graham has remarked that stocking and restocking certain shelves has become something of a never-ending task.

And across Elm Street, there’s the Farm Services store, where chickens are flying off the property. Well, in terms of purchases.

Where shutdowns and public health restrictions in the wake of the coronavirus outbreak have inflicted hits both significant and debilitating, sending myriad industries such as restaurants and retail into upheaval, garden centers and home improvement outlets have been able to find sunlight amid the storm.

Spring generally has proven a sweet-spot season for this sector, from national big-box chains Home Depot and Lowe’s and Southern States to area mom-and-pop establishments in Alamance County.

Now, those in charge of local companies such as Mebane Shrubbery, Colonial Hardware and Farm Services are experiencing further increases in business – particularly of the do-it-yourself variety – during the stay-at-home mandates of the pandemic.

“A lot of people are doing their own gardens and raised beds, because they’ve got everybody at home,” Hayward said. “Families are getting together and doing more projects and things outside. So I think instead of hiring landscapers, a lot of them are doing it themselves. And they’re becoming more aware of plants and just working in their yard as an activity with their kids, just to get out of the house.”

Hayward said Mebane Shrubbery’s greenhouse sales are up 20-30 percent. Yard accessories like spinners and globes have been popular buys, along with mulch and compost. In contrast to last year, there are no leftover supplies of seed potatoes. Those went quickly, Hayward said.

Same goes for the briskness of seed, plant and gardening sales at Farm Services, described by Talley as “phenomenal.” In addition to that interest for growing fruits and vegetables, the scores of chickens available there have made for a backyard sensation.

Talley, who owns Colonial Hardware and Farm Services with her husband, said Farm Services offers chicken breeds that produce precise numbers of eggs – 280 per year, for example – prompting people to share eggs with their neighbors and so forth. Special harnesses can be part of the mix, too, designed similar to leashes for taking the chickens on walks. Talley said those devices have sold out three times.

Beyond the perhaps peculiar visual of a chicken out for a stroll like a dog in a housing subdivision, Talley sees greater meaning and self-sustaining perspective at work.

“The chicken is the new pet now here in Alamance County,” she said. “People want to have them and they love them. It’s really quite an interesting thing.

“As much as people have complained about being at home, I think they have definitely transitioned to maybe a simpler way of life or a simpler way of thinking about where they get their food. And I think they’re trying as much as they can, because they have fear in the fall that this might happen again. They want to be somewhat self-sufficient and having some food stored. Obviously you can do that for pennies if you grow your own food from seeds or from live plants.”

Colonial Hardware, under the direction of general manager Aaron Long, has blocked off an hour for senior citizens from 7-8 a.m. each day, a time where customers more vulnerable to the spread of the virus can proceed at their own pace while avoiding potential crowds.

Such safety measures are among the public health precautions in place around these area home improvement outlets and garden centers.

Social distancing markers, cleaning and disinfecting, and curbside service are in effect at Mebane Shrubbery, Colonial Hardware and Farm Services. Talley said online purchasing has been an effective way of reducing risks for shoppers, who can call upon arrival at Farm Services, for instance, to have their orders brought out and loaded up without leaving their vehicles.

Chainsaws, grills for outdoor cooking and deck refurbishing items have been some of Colonial Hardware’s other big sellers. Talley said protective N95 face masks “flew out the door.” Wednesdays at the store have become recognized more and more by its clientele as delivery days for supplies.

“They’re literally standing at the door when we get the truck in and saying, ‘Did you get this? Did you get this?’ ” Talley said. “We like to be here for our customers when they need us, so that’s been a real joy. Aaron has said that he’s seen a lot of faces he’s never seen before, and he says hopefully when all of this is over he’ll continue to be able to see those faces.”

Deliveries have been on the rise and curbside service customers have climbed at Mebane Shrubbery, with Hayward saying produce probably is a driving force in that regard. Vegetables like squash, peas, corn and beans are on the menu for planting now as April gives way to May, fully leaving behind the cooler period for broccoli and cauliflower.

Hayward adds to her staff during the busy spring seasons, regularly tripling its size, though coronavirus concerns have decreased the number of retirees taking jobs there this year. Employees are wearing face masks and washing their hands with alcohol and aloe throughout their shifts. Flower decals are posted with social distancing instructions and one-way signs direct traffic in and out of the greenhouse.

Shoppers have seemed to be more proactive with ordering over the phone and also educating themselves about diving into gardening pursuits or do-it-yourself projects, Hayward said.

That’s a trend felt and heard in the magnitude of calls fielded by Mebane Shrubbery personnel. An inquiry on a recent afternoon had worker Kayla Debien pleasantly comparing the hive of activity there to a state of insanity.

“The phones have been ringing off the hook,” Hayward said. “People are asking, ‘What are your times? What do you have?’ Some would rather not come in and look. They just want to know, ‘Do you have this in stock? When are you getting this in?’ Because they want to time it when we have it and come in, instead of coming in and browsing.”