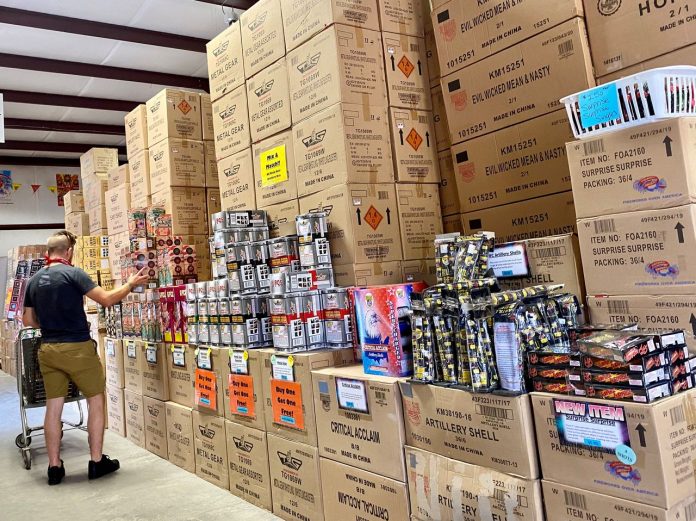 When they were done, they still had two trucks to fill.

The Central New Yorkers spent $2,800 Friday at Mess’s Fireworks in Great Bend, Pennsylvania. They drove two hours from Utica and crossed a state line to buy everything from sparklers to “big ones” — the kind of fireworks you can’t legally buy or use in New York state.

“We have three trucks here,” one man said. “We have a convoy.”

The group of friends, who asked not to be named, said they’re planning to throw a private show. They’re far from alone.

Sales of fireworks have soared this year at Pennsylvania shops and at retailers around Central New York selling less explosive fireworks.

Why? The coronavirus pandemic, they say.

Most communities have cancelled Fourth of July fireworks shows due to the pandemic, so people want to put on their own shows, retailers and customers said. Most people have also been stuck at home and just want to get out and have fun, they said.

That’s also caused complaints about fireworks to explode this year across Central New York, the state and the nation.

In Syracuse, police have gotten over 1,500 complaints so far this year — up from 133 this time last year, Syracuse police Sgt. Matthew Malinowski said. That’s a more than 1,000% increase.

The bangs and crackles of fireworks have become such a frequent, nightly nuisance that the Syracuse Police Department has assigned at least two officers to spend their entire shifts cracking down on illegal fireworks. Firefighters are also helping police spot the illegal shows.

Where are the fireworks coming from?

Taking a road trip to Pennsylvania isn’t the only option for CNYers. Illegal fireworks have been sold out of small markets and corners stores in Syracuse, police said. One person was recently caught selling fireworks in Syracuse from the back of a U-Haul van.

Some fireworks are listed in Internet classified ads. Search Craigslist, and you’ll quickly find everything from artillery shells to roman candles for sale in CNY.

Pennsylvania retailers — who can legally sell the fireworks banned in neighboring New York — are enjoying soaring sales. Over and over, customers have cited the same reason for their increased hunger for the colorful explosives: the coronavirus pandemic.

To stop the spread of the coronavirus pandemic, cities and towns across the nation have cancelled their annual firework displays. Hungry for a celebration, people have decided to throw their own Fourth of July shows.

“This is an American tradition,” said Jim Monaforte, who owns a fireworks shop just south of the New York border. “You can’t stop the Fourth.”

Not everything that flashes and pops is banned in New York.

Fireworks classified by the state as sparkling devices can be bought at stores like Walmart or from the nearly 300 tents that temporarily pop up in store parking lots across Central New York. Grounded or handheld devices that crackle or whistle and send out colorful sparks or flames are also legal.

While the legal fireworks don’t light up the sky, they’re still a popular buy.

Tony Baris, who sells fireworks for TNT Fireworks out of a tent in the Walmart parking lot on Route 31 in Clay, said sales are up about 20% compared to last year.

“People have been cooped up for months now, and everybody wants to do something to break all the tension, the boredom, and just have fun,” he said.

More flashy fireworks, however — like roman candles and cherry bombs — are banned.

Any fireworks that boom or are launched into the air are illegal in New York. People who violate the law could face charges ranging from a ticket for setting off fireworks to a felony for repeatedly giving fireworks to a child under 18 years old.

People looking to reach the sky are flocking to Pennsylvania, where residents can buy fireworks and set them off legally depending on local laws.

Monaforte said Monaforte Fireworks has been in his family for 50 years. His red-roofed, one-story shop is off of a quiet country road 90 miles south of Syracuse in New Milford, Pennsylvania.

Country music played from speakers Friday as three customers browsed everything from firecrackers to 500-gram cakes, the largest consumer firework that can be sold under federal law.

The fireworks come in colorful packaging that, at first glance, look like toys. Some were even inspired by children’s movies: One 25-shot brand was dubbed “Toys” and had pictures of Woody and Buzz Lightyear from “Toy Story” on its box.

Business is up “big time” this year, Monaforte said. Customers are coming from Pennsylvania and neighboring states to buy the fireworks needed to throw the shows their hometowns have cancelled.

“People want to enjoy themselves,” he said with a smile. “Everybody’s gonna have a good time on the Fourth.”

It was just 11 a.m. Friday, and 10 cars of customers — over half hailing from New York — were already in the gravel parking lot of the New Milford, Pennsylvania, shop. Two employees were helping a woman load six black trash bags bulging with fireworks into the back of her SUV with New York plates.

Bottles of hand sanitizer were placed at the warehouse’s entrance in a nod to Covid-19. Customers wearing masks milled around the high-ceiling warehouse lined with 5-foot stacks of boxed fireworks, buying everything from 50-cent noise makers to $100 mortars.

A store employee, who declined to share her name, said the store has had days of record sales: Customers are spending anywhere from $30 to $10,000 on fireworks.

The Fourth of July is finally on a Saturday, she pointed out. That fortuitous timing, plus the pandemic, have brought customers from all over to the warehouse just off of Interstate 81.

“We’ve literally been waiting for this for years,” she said.

Police try to crack down on spike in fireworks

The surge of firework sales that are a boon to businesses have become a huge problem for police.

Cities across the nation are scrambling to stem a soaring number of complaints of illegal fireworks. For example, complaints about illegal fireworks in Boston were up 2,300% in May compared to May 2019, reported CNN. Complaints in Pasadena, California are up 400%.

Police across New York, especially in the Southern Tier near Pennsylvania, are trying to crack down on the problem.

The New York State Police have seized at least $5,600 worth of illegal fireworks in Broome County near the Pennsylvania border since Friday. At least five people were arrested in three separate incidents after they were pulled over for traffic violations on Interstate 81.

In Syracuse, where police have dedicated two officers every night to bust illegal fireworks users, officers have seized fireworks eight times since June 16. Officers will stay on the beat through the Fourth of July, police said.

But the busts won’t deter all New Yorkers.

The crew from Utica who brought close to $3,000 worth of fireworks back to New York from sleepy Great Bend still plan to light up the night sky after a friend’s lakeside picnic in August.

Repercussions or not, they plan to throw a great show.

Reporter Samantha House covers breaking news, crime and public safety. Have a tip, a story idea or a comment? Reach her at shouse@syracuse.com.

Halo Truck: Ford teases macho Bronco, but is it a Raptor...