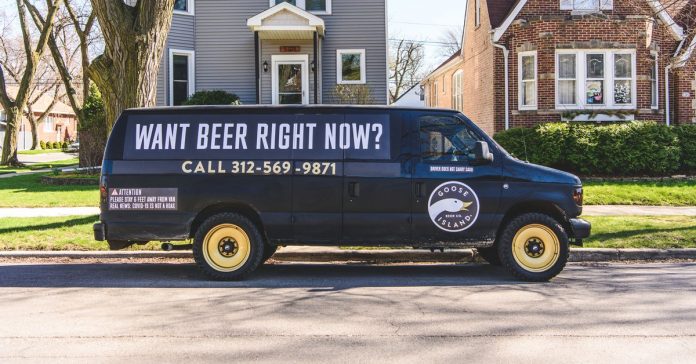 As Illinois bars and taprooms, along with dine-in restaurants, have remained closed since March 17 due to the COVID-19 pandemic (and will continue to remain closed until April 30), breweries of all sizes have scrambled for new ideas and strategies to get their beer to customers. While liquor stores have been able to remain open because the state considers them essential businesses, the lack of bars means that customers no longer have a showroom where they can try and fall in love with new beers.

As a result, breweries have had to rely on different marketing tactics. One of the more notable comes from Goose Island Brewing Co., which has dispatched a black van to roam the streets of Chicago Thursday through Sunday, playing ice cream truck music. If customers call the phone number displayed on the van, the van will deliver beer to them. The van’s appearances have sparked a Reddit thread, one of whose users posted, “Saw this yesterday and it brought me joy.”

Goose Island is also selling Sunshine Tomorrow Blonde, a special beer only available at the Fulton taproom. Its profits benefit the Chicago Community COVID Response Fund, a collaborative effort with United Way and the Chicago Community Trust. According to the fund’s website, donations will help to support health and human service organizations that have seen “a surge in demand for services from neighbors and communities significantly impacted by the coronavirus outbreak.”

Over in Avondale, Metropolitan Brewing is trying a different tactic: it has announced that for the first time ever, it will release its beers in cans. “It’s less expensive to can beer,” says Metropolitan Brewing co-founder and President Tracy Hurst. And with more customers buying beer to go, cans are also easier to transport.

Hurst estimates that Metropolitan’s sales have fallen by about 90 percent since the outbreak, a figure she says is in line with the drops in sales at other breweries. “When your business is based on people gathering, something like this is really hard to digest,” she says. “In order for our sales to get back to the business we originally had, we have to have people in the space again.”

But in the meantime, the switch to at-home beer consumption inspired Metropolitan to release three beers in cans. Stromhaus Helles and Jet Stream Wheat comes out in May, while popular Krankshaft will join the canned lineup in June. On top of that, the brewery also has plans for a collaboration beer with Kuma’s Corner, which reopened Monday for carryout.

Initially, the cans will only be available to go at the taproom, but Hurst expects wider distribution around Chicago. Stores such as Bitter Pops in Lakeview will also stock the cans. Bitter Pops will feature its Newbies and Freshies Illinois Craft Becheer Week Box in May. It’s a variety pack of new beers selected by the store.

Canned beer was once stigmatized by craft beer fans as an inferior product, something a macrobrewery would produce. But that stigma has gradually disappeared as respected breweries, including Off Color Brewing, have started to offer their drinks in cans and advances in manufacturing have made canning beer more cost effective. .

Since December, Metropolitan had actually planned to release Jet Stream Wheat in cans to coincide with what would have been Illinois Craft Beer Week, an annual promotion involving the state’s bars, breweries, and the Illinois Craft Beer Guild. The event, which was scheduled to take place in May, was cancelled due to COVID-19.

Despite the turmoil, Hurst is trying to look on the bright side.

“I would just say that craft beer and craft beer consumers are, by nature, hopeful, and fun,” she says. “Even if our lives never look like the way they looked before, we definitely will find ways to enjoy beers together.”

Get Out of the Box With a Food Truck