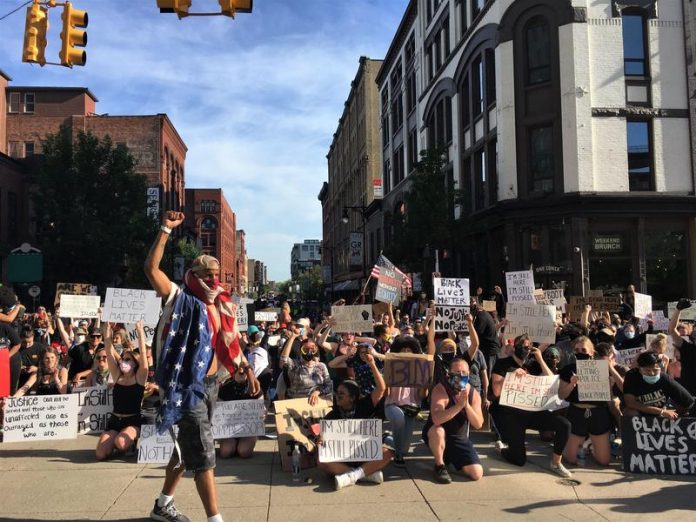 Hundreds of angry people with no leader, and no plan.

A city, and a police department, on edge.

That was Grand Rapids again last night, less than a week after protests downtown turned to destruction and looting.

The official protest yesterday, the one that was planned, ended at 5:30 p.m. Organizers asked people to leave downtown.

So they started marching.

They made their way to a barricaded street. Green dump trucks lined up, blocking off a section of downtown, the section where the police department headquarters is.

The protesters took a knee.

Then a man stood up. He had a tattered American flag wrapped around his torso.

This guy is not an organizer. He’s just a guy who showed up on a bike with an American flag and he decided to speak. Now hundreds listening in the street pic.twitter.com/U835nRnkkv

The man with the flag

Suddenly, this man they’ve never met, this man talking about God, he has their attention. He delivers a rousing speech, making it up as he goes. His name, he tells me, is Brian Jennings. He’s from Chicago. Only been in Michigan a year and a half. Only been in Grand Rapids two weeks.

Even more: He says he was arrested Saturday during the night of mayhem and looting. The Kent County Sheriff’s Office confirms he was jailed early Sunday for “malicious destruction of property.” Jennings says it was a mistake, and he’s innocent. He says he was just riding his bike, on his way to pick up food for his pregnant girlfriend. No charges were filed. He was released.

On Fulton and Ionia, people listen to his words, and cheer him on.

When his impromptu speech ends, people stand up.

They start marching again. Jennings jumps on his bike and makes his way to the front.

They take the street, the man with the American flag leading them on his bicycle.

They make up the route as they go along – up to Heritage Hill, over to Michigan Ave., avoiding the highway, because police have it blocked off.

“I was thinking, what can I do?” says Hannah Schaffer, who went to the store during the march, and brought back snacks and water to hand out.

They march for a mile, then two. Others decide to take a role in this new community.

“I really didn’t expect any of this,” says Hannah Schaffer, as she stands on a street corner handing out snacks and water that she’d just bought. “I was thinking, what can I do? These people need fuel. This is a peaceful protest and this is what we need, so we’re going to keep it going.”

At the back of the march, a white car appears, driving slowly, pulling into the opposite lane, blocking traffic, protecting marchers.

A man leans out the window. He tells me he goes by AG, just AG.

The march stays on residential streets. I catch up with Jennings, still leading the way.

“Did you know any of these people before today?” I ask him.

I ask him who decides where they go next. He says God’s in charge.

Four miles into the march, something happens.

Police, who at first followed the protest on bicycles, have now melted away, and the march has made its way into new territory.

They march into East Grand Rapids, a separate town, a wealthy enclave known for leafy streets and lakeside mansions.

Some people come out on front lawns to wave and cheer.

But one woman walks into the middle of the street holding a baseball bat, ready to swing.

Jennings grabs the bat. The crowd swarms around her.

“No bat!” someone shouts as they try to take it away from her. It works.

“We protected her, we removed the bat,” Justin Tavenir tells me later on in the march.  “We walked her to the sidewalk, because people were starting to get aggressive – we don’t want that, we want a peaceful protest.”

I ask if she said anything to Tavenir.

Near mile five, Jennings stops the people to gather. They kneel in the street.

Jennings talks about justice, and God and Jesus. He asks for a moment of silence. He tells them to close their eyes. Then, he leads them in prayer.

“Hallowed be thy name,” the people respond.

They say the Lord’s Prayer out loud, then he asks them to say it again.

When they’re done, they get back up to march.

Now they’re headed back where they started: downtown, where the streets are barricaded and police wait in riot gear.

When they arrive, they’ve been marching for more than seven miles.

But downtown, the mood shifts. The marchers step up to the barricaded line of law enforcement.

“He’s got his finger on the trigger!” one man shouts, pointing at a sheriff’s deputy.

I’m standing between the line of protesters and the deputies in the riot gear. I can’t see everything that’s happening. But everyone feels the tension rising.

The protesters come up with a simple ask. They want the sheriff’s deputies to kneel with them.

Earlier in the day, the chief of Grand Rapids Police had come out, briefly, to talk to the protesters at the original event, and take a knee.

That didn’t seem to satisfy this crowd. And the people with the riot gear and shields never kneeled.

“One person kneels we leave.”

After several minutes, the deputies, with their black armor and faraway stares, change. They meet the protesters eye to eye.

“One knee, we will leave,” says a protester named Gershom Uredi. “One person kneels we leave.”

One deputy looks at the guy next to him. Do you think he’s telling the truth? He asks. The other deputy nods. But they do not kneel.

Jennings has given up talking

“We don’t gotta talk to them no more,” he shouts to the protesters. “They know what we want.”

His back is to the line of deputies.

But they’re not the only line.

On the other side of a dump truck, more deputies are stationed, filling the gap between trucks. And other protesters have been pleading with them too.

Suddenly past Jennings, a cheer goes up.

Some of the deputies have taken a knee in their riot gear.

The cheering fades. People shake hands with the deputies who kneeled.

The deputies taking a knee – it was a symbolic gesture One that the city’s police chief had already done earlier in the day.

But one protester, Anthony Jacobs, tells me, this gesture meant a lot to him.

No tear gas. No rubber bullets. No violence.

And after grabbing the attention all night, I find Jennings alone, leaning up against a bus stop. He’s weeping.

I ask what’s going through his mind.

I think Jennings  knows, like everyone else, that a few deputies taking a knee doesn’t solve the big, structural problems that led to the march here, or anywhere else.

But on this night, for one night, at least for the people here, it feels like a change.

Want to support reporting like this? Consider making a gift to Michigan Radio today.

Blotter: Pickup truck abandoned after pulling out ATM at bank