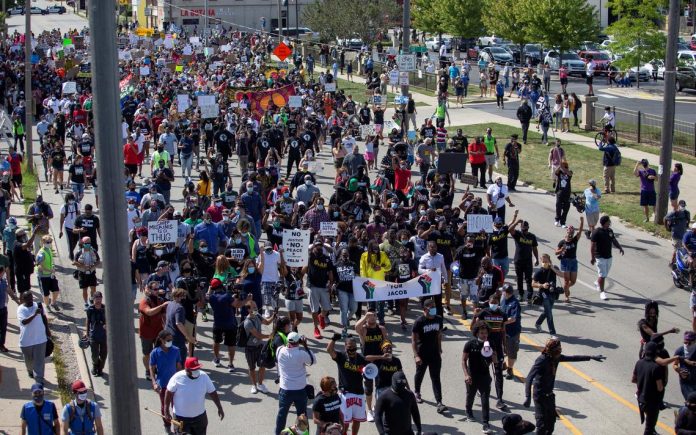 Jacob Blake Sr., father of the 29-year-old Black man whose shooting by a white police officer on Sunday sparked the unrest, called on protesters to refrain from looting and vandalism, which had overshadowed peaceful protests before a tense calm set in the past three nights.

“Good people of this city understand. If we tear it up we have nothing,” he told a gathering at a park that was the hub of protests in support of his son, Jacob Blake Jr. “Stop it. Show ’em for one night we don’t have to tear up nothing.”

The shooting of Blake, in front of three of his children, turned the mostly white city of 100,000 people south of Milwaukee into the latest flashpoint in a summer of U.S.-wide demonstrations against police brutality and racism.

Trump, who has taken a hardline stance against the protests, will visit Kenosha on Tuesday to meet law enforcement officials and assess damage, a White House official told reporters.

“The thing I’d like to tell Mr. President is that Black Lives Matter members are not the thugs, not the looters,” said Clyde McLemore, founder of a BLM chapter just outside of Kenosha. “He’s blaming us, and that’s not the way it is.”

Blake, 29, survived but was left badly wounded and paralyzed from the waist down. He will likely participate via video from his hospital room in a court hearing next week about criminal charges that predated the shooting, his lawyer told Reuters on Saturday, adding he would plead not guilty.

Anger at Blake’s shooting, captured on video that went viral, led to street skirmishes; protesters hurled firecrackers and bricks at police in riot gear who countered with tear gas and rubber bullets. On Tuesday night a white teenager with a semi-automatic rifle shot three demonstrators, killing two of them.

In Kenosha on Saturday, people painted messages of unity on boards protecting storefronts after many businesses were burned to the ground in arson attacks and vandalism.

Residents hoped calm would hold for a fourth night as protesters, some wearing “Justice for Jacob” masks, spoke about the need for racial justice.

“We are tired,” said Darius Johnson, 27, of Milwaukee. “There is no excuse for this kind of racism. It could have been any one of us, my brother, my sister. It needs to stop.”

The 17-year-old suspect in Tuesday night’s killings, Kyle Rittenhouse, surrendered to police on Wednesday near his home in Illinois close to the Wisconsin border. Kenosha officials have been criticized for videos showing law enforcement agents giving him water before the burst of violence and acting chummy with armed militia men in the streets.

By Friday, more than 1,000 National Guard soldiers were on the ground in Kenosha, many from out of state.

As Kenosha went on curfew at 7 p.m. local time, authorities in Chicago blocked streets and braced for dueling demonstrations along the city’s “Magnificent Mile,” a 13-block stretch of downtown’s Michigan Avenue, media accounts said. Some planned to protest police brutality while others prepared to demonstrate to support the police, they said.

Rittenhouse is being held without bond and awaiting an extradition hearing on returning him to Wisconsin. His lawyers have said he would fight the charges against him, which include first-degree intentional homicide, arguing self-defense.

“Kyle Rittenhouse stood up to protect his community and his country,” John Pierce, one of Rittenhouse’s lawyers, said on Twitter.

Blake, who has undergone multiple surgeries since the shooting, had been handcuffed to a hospital bed because of an outstanding arrest warrant. The handcuffs were removed on Friday after the warrant was vacated, according to his attorney, Pat Cafferty.

The warrant was based on a criminal complaint filed in July. The complaint shows that Blake’s ex-girlfriend, the mother of three of his children, told police Blake broke into her home on May 3 and sexually assaulted her before stealing her truck and debit card.

Wisconsin Attorney General Josh Kaul said this week that police confronted Blake when called to the home of a woman who had reported her “boyfriend was present” without permission, and officers tried to arrest him. Kaul said efforts to subdue Blake with a Taser failed, and that investigators later recovered a knife from the floor of the car that Blake was leaning into when he was shot.

On Friday, the Kenosha police union defended the officers, saying Blake was armed with a knife, fought the officers and was given several chances to cooperate before they used deadly force.

Predicting the Unpredictable: Attempting to plot out the economic recovery –...