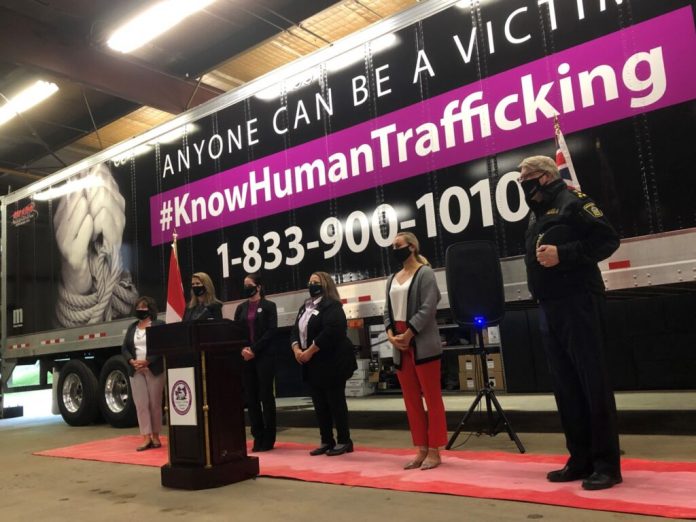 CAMBRIDGE, Ont. – Ontario’s 400 Series highways have been recognized as a known human trafficking corridor, but a new trailer taking to those routes will deliver a message of help.

The Women’s Trucking Federation of Canada, in a partnership with Sharp Transportation, unveiled a trailer today that stresses anyone can be a victim, a related hashtag of #KnowHumanTrafficking, and a help line at 1-833-900-1010.

“Human trafficking is abhorrent, and it is maddening that initiatives like this are needed, but they are so important because the reality is human trafficking is one of the fastest growing crimes worldwide,” said Ontario Transportation Minister Caroline Mulroney, on hand for the event. “And with nearly 2/3 of police-reported cases in Canada taking place right here in Ontario, it’s so important that we pay special attention to this issue.”

“Every day, offenders are preying on our children and our young people for the purpose of sexual exploitation – a crime that robs them of their safety, their dignity and of their youth,” she added. “Young women and girls are particularly at risk, especially those from indigenous communities and youth in care.”

The trailer’s mission is to help strengthen a provincial strategy of engaging the public and raising awareness, said Shelley Uvanile-Hesch, CEO of the Women’s Trucking Federation of Canada.

The province has previously announced $307 million in funding over five years to support enforcement, health, education, and victim support.

She will be personally driving the trailer across Ontario, in conjunction with a series of speaking engagements.

Uvanile-Hesch was also at the wheel when pulling a Sharp Transportation trailer that promoted the importance of social distancing. But this trailer is admittedly darker than the fleet’s other wrapped equipment. The stark black sides are anchored with an image of bound hands.

“That’s the message: Human trafficking is not pretty,” said Sharp Transportation spokeswoman Kimberly Biback. “When we partnered and collaborated with Motive Media on the design, we wanted to ensure that this message spoke loud and clear. Now’s the time to wake up. There’s a severe issue in our province and our home, and now’s the time to get the public involved, open their eyes, and take action. If the first step to education is awareness, this trailer speaks volumes.”

“Behind us is the simple notion of good citizens making a difference,” he said, noting that police work to fight trafficking is largely focused around the hotels and motels along 400-Series highways.

Mulroney told TruckNews.com that awareness of human trafficking is growing, but that many people continued to be surprised by how prevalent the problem is.

“Human traffickers don’t respect borders, and that’s why we need a national strategy to combat human trafficking. Raising awareness of human trafficking particularly along our highway corridors is an essential part of prevention,” she said.

“It’s reported that up to 60% of all human trafficking in Canada involves the use of the 400-Series highways. That’s why our government is taking steps to partner with the private sector to raise awareness and explore safety enhancements at key locations such as truck inspection stations, rest areas, and highway service centers.”

Private fleets warned of Top 10 legal threats to their businesses...