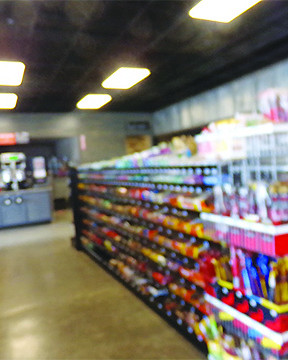 ANTONITO — The message at Friday’s grand opening of the Antonito Fuels, Inc. was the amazing success possible when families work together.

Officiated by Elliott Salazar, public information helper, the program began with a message by Fred Cordova, who worked with his family to establish the business and get it up and running.
It wasn’t easy, Cordova said, but the help of his wife Berlinda and their daughters, growing family and countless friends, it was possible.

Sitting at the south edge of Antonito, the fuel center is a truck stop, giving truckers a place to take a break in the long hauls from New Mexico into Colorado.

Cordova spoke of obtaining financing, training his daughters and the new employees who joined them and arranging fuel deliveries from a Sinclair Oil franchise owned and operated by Mo Jones of Center.

Jones parked his huge silver-colored truck next to the station and was recognized by Cordova.
Needless to say, it is a local business.

Betsy Markey, Colorado director of economic development, commented about the beauty of the San Luis Valley and how pleased the area is developing itself.

She spoke before former US Secretary of the Interior Ken Salazar, who spoke about the gamble opening a new business could be in a place such as Antonito.

Growing up with roots running many generations deep, he says Los Rincones, the family home settlement, is his home.

The new growth is lighting up the area and Antonito Fuels, Inc. is a “a prime example of what people can do.”

He suggested the day be named “The Fred Cordova Day.”

Also speaking was Antonito Mayor Aaron Abeyta, who said his dad always said, when something began, “Como La Gente,” referring to people helping people. Abeyta said he believes that is his purpose, to help people whenever and wherever he can.

Just like the settlers from the past, “We’re sticking around.”

Financing was a huge topic and Robert Chavez, president of the Guadalupe Credit Union, said, while his bank didn’t provide all the funding, it did what it could.

He said Cordova is filling a huge void in our community with his fuel center.

Situated on 14 acres, the truck stop is being built for both trucks and cars and will care for the motoring needs of travelers and locals.

Fuel islands for gas and diesel vehicles were built by Seneca Companies and the store by a local contractor, Robbins Construction, consulting with Martin Engineering.

The top-tier, Sinclair-branded gasoline and diesel fuel will be provided by Jones Oil.

Visiting speaker, Ray Duran, is a successful convenience store developer in metro areas, who said he found out he is a relative of Berlinda Cordova and decided to help out.

He sent his own staff to help out and said he would do it again. “We are all in this together,” he said.

After the speakers, thousands of dollars’ worth of door prizes, gasoline and discounts on gas purchases were given away and the huge dinosaur outside the fuel bays seemed to smile in approval.