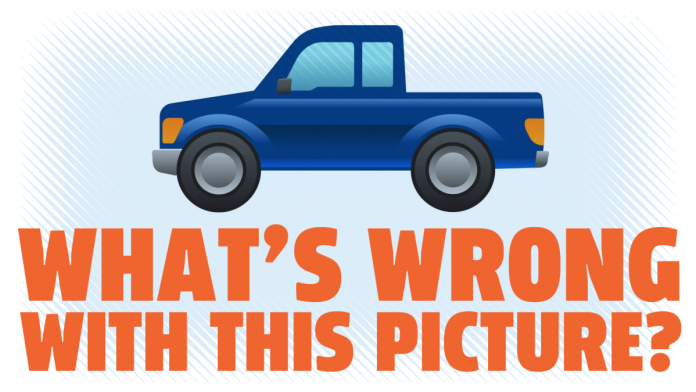 I expect that most of you are aware that there has been a colossal hole in our primary global communications system, the set of 3,178 emojis that form the vocabulary of most major forms of business and interpersonal communication among humans. That hole has been the lack of a pickup truck emoji. Now, with secretive work from Ford and tomorrow’s release of Apple’s iOS 14, that hole is about to be filled. But there’s a huge problem that must be addressed.

The addition of a pickup emoji has been a long time coming, and an embarrassing omission from the emoji lineup, which includes most other common forms of automobiles, including SUVs, box trucks, ambulances, scooters, even tuk-tuks.

While some of us have attempted to create ersatz pickup truck emojis by combining the SUV with the inbox tray, the results have left a lot to be desired:

Now, Ford saw this problem as a potential marketing opportunity, and secretly campaigned to the Unicode Consortium to include a pickup truck emoji, which they designed for the proposal.

The emoji they designed is somewhat generic, but has a few key Ford-like design traits, because of course they’re going to make sure it does.

While the emoji retains the cartoonish proportions of most emojis, I think the truck it has most in common with is a 2012 or so Ford F150 XLT. You can see that the shapes of the light units, the combination of round and square corners on the extended cab window, the pronounced wheel arch flares, and, most tellingly, that F150 side window jog all contribute to subtly identify this as a Ford truck.

Ford clearly put a lot of effort into the design of this emoji, and even more effort into the marketing around it, as you can tell from this goofy/fun little video about the process:

Okay, that’s fine. There’s some cute gags in there, and while it’s a little weird to have a specifically branded emoji, even as near-generic as this, Ford did spearhead the push to get a pickup emoji in there, so I can’t be too mad.

What I can be mad about is Ford expending all of this time and effort and still somehow fucking it up. How? Look at the emoji again:

Notice anything weird about it? Anything I, in particular, might notice?

That’s right. The taillight. For some reason I cannot begin to understand, it’s orange.

Literally no truck built in the world today has all-amber taillights. If you’re going to pick just one color for a taillight, it’s going to be red, absolutely, no question. All the other automotive emojis seem to understand this:

Look, I’m very pro amber rear turn indicators; this is something about which, improbably to most well-adjusted people, I give a shit. But even with amber rear indicators, I know that a wraparound taillight similar to what’s shown on that truck emoji would be primarily red, especially a Ford, which sells most of its trucks in America, a land that has legal requirements for red rear side marker lamps, like many other countries.

Just conceptually, red means taillight. It has for over a century. It’s not like Ford was restricted in colors here—these things are done in full 32-bit color, which is 16.8 million colors. They can find a red.

The fact that Ford would spend so much time and effort on this and push it out with a confusing and needless design choice like this is absurd, and I’m not going to stand for it. No. Not today.

Instead, I am issuing a formal demand, on behalf of the Global Coalition For The Advancement Of Taillights And Taillight Culture (GCATT) an organization that I both am the President of and just made up, that Ford amend their emoji proposal before mass distribution to include red in the taillight.

I am happy to provide the following options:

Any of these options is a better choice, and there are options to include indicator, reverse, and taillights, and all meet the standards for side marker lighting.

Also, this is an official demand, so Ford has to do it.

I’m just glad I caught the problem before it went live. In the future, I encourage any taillight-related emojis be run through me first.

An Exclusive Look Inside The Secret World Of Greyhound Training –...