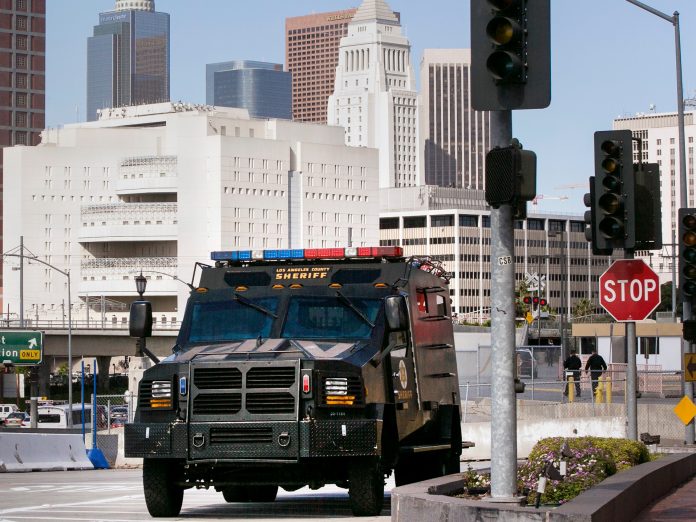 This is part one of a CapRadio series examining police reform.

Just two months ago, before the coronavirus closed businesses and before the killing of George Floyd shook the nation, Sacramento City Council made an unpopular, but relatively quiet decision. They voted to spend  $400,000 from the city’s public works fund to buy an armored military vehicle called a Lenco Bearcat.

The decision was opposed by those who felt this would further militarize the police force, but the council ultimately okayed the purchase. Their decision hinged on Police Chief Daniel Hahn, who argued  that the 2019 death of Sacramento Police Officer Tara O’Sullivan could have been avoided had the Sacramento Police Department had an additional armored vehicle at the time. O’Sullivan died of injuries from a gun ambush, and the investigation that followed showed a delay in the amount of time officers were able to get to her.

“What that man was firing at Tara and our officers, there really is literally nothing other than this piece of equipment that can stop those rounds. The only way those officers could get to Tara was with a vehicle like this,” Hahn said during the March council meeting. Sacramento currently has two armored vehicles, one it acquired through the 1033 program -which allows local law enforcement to acquire surplus military equipment- and another that was purchased independently. Hahn said that the vehicle obtained through the 1033 program is old, which is why they were asking for the purchase of another Bearcat.

“That one doesn’t often start, so we are giving that back to the military, so we will continue to have two armored vehicles,” he said. He added that he did not see the vehicle as a military weapon.

“It really is literally a pickup truck that is bullet-proof. It’s an F 550, but it’s bullet-proof,” he said. “So it’s not really a weapon at all, it’s equipment that keeps both our officers and our community safe.”

But some experts disagree. John Lindsay-Poland is a researcher at the American Friends Service Committee, whose work focuses on demilitarization of law enforcement. He said he believed police purchasing of military equipment like armored vehicles is as much about the visuals as it is about purpose.

“A lot of times, the police want to project shock and awe, so they will bring out armored vehicles that look like tanks, they’ll bring out the guys all dressed in black with big rifles, with things that shoot tear gas and rubber bullets in order to appear like the baddest dude,” Lindsay-Poland said.

Additionally, some studies show that police departments with a greater amount of military equipment are more likely to commit acts of police brutality.

He added that military tactics by police date back to the war on drugs in the 1980s, and also to the creation of the 1033 surplus military equipment program in the 1990s. To date, Sacramento has received over 300 military assault rifles through this program, including the city’s old bearcat that it’s pulling from service.

Representatives who manage the 1033 Program, also known as the Law Enforcement Support Office (LESO), have said that the 1033 program is infrequently used to acquire military weapons. Most items that are given to local police departments tend to be more innocuous, like gym equipment, computers and office furniture. Lindsay-Poland agreed, and felt that though the 1033 program creates a connection between local law enforcement and the military, most of the military equipment acquired by police departments is purchased and not given.

“What is totally opaque is how many military assault rifles, rubber bullets, tear gas launchers, sound cannons are being acquired and used by those departments, because a lot of those are being purchased through city and county general funds and they’re not reported, neither the acquisition nor the use,” he said.

Former Sacramento Police Chief Rick Braziel served on the investigation commission after protests following the police killing of Michael Brown in Ferguson, Missouri turned violent. He said the biggest takeaway was that policing to prevent violence was a “software” problem and not a hardware one.

“The military surplus equipment we get is just hardware,” Braziel said. “The software is how we operationalize it, it’s training, it’s how we make the piece of equipment function in the field. The issues in Ferguson were not about the equipment, it was how the equipment was used.”

He admitted however that sometimes, certain equipment could put officers in a particular mindset.

“In some cases, it’s officers wanting to look like they’re heroes, which is the military, and it takes leadership to say no, we’re not the military, we’re a policing unit in the United States, we don’t need that equipment,” Braziel said.

Sonia Lewis with the Liberation Collective for Black Sacramento, an organization looking for alternatives to current policing methods said Sacramento police department’s reactions to last weekend’s unrest was not what the community needed.

“One of our chants is, why are you in riot gear? There is no riot here,” she said. She added that during events from this past weekend, she saw police use unnecessary force and weapons in an attempt to control the crowd, and that police wearing riot helmets changed the tone of the demonstrations.

“When we see things like that, military means we’re at war, and I feel as though the leaders in this state have basically waged war on its citizens,” Lewis said.

Braziel is currently working with the Portland,Oregon police department to look at alternatives to outfitting police in uniforms that protect them but also looks less confrontational and militaristic. Some examples of places he’s looking to for examples are the Belgian police force and the Canadian police.

Lewis and other organizations like the Anti-Police Terror Project, Decarcerate Sacramento and ANSWER Sacramento are working on creating alternatives to police force to resolve community issues.


CapRadio provides a trusted source of news because of you.  As a nonprofit organization, donations from people like you sustain the journalism that allows us to discover stories that are important to our audience. If you believe in what we do and support our mission, please donate today.