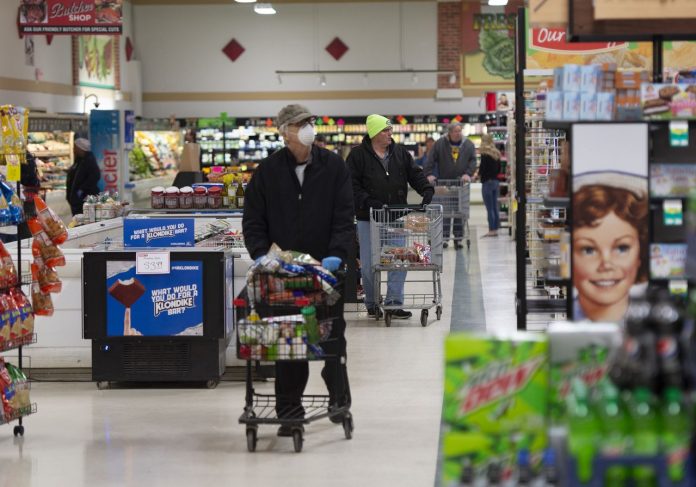 Roughly two-thirds of Michigan shoppers are wearing masks inside retail stores, based on a MLive count at 37 stores across the state.

Stores where the counts were conducted included Meijer, Walmart, Kroger and Lowe’s, as well as smaller supermarket chains such as Aldi, Hardings, Polly’s Country Market, D&W and Plum Market.

Since mid-April, Michigan residents have been required to wear a face covering in public enclosed spaces, and stores can refuse service to anyone not wearing a mask, under an executive order issued by Gov. Gretchen Whitmer. However, there is no penalty for violating the mask policy.

Mask use in stores also is recommended by the federal Centers for Disease Control and most public-health experts.

“I’m a huge believer in universal masking,” said Dr. Joel Fishbain, an infectious specialist for Beaumont Health in metro Detroit. “I know there’s a lot of debate. I know there’s lots of resistance.

“But the idea of the mask should be just changed to being a good steward of the human race,” he said. “I don’t think it should be that big of a deal.”

MLive’s informal, unscientific survey comes as more and more evidence is emerging that mask use helps prevent the spread of coronavirus.

This week, a study of the COVID-19 outbreak aboard the USS Theodore Roosevelt found that sailors who wore masks and practiced social distancing were less likely to contract the virus. Another study released this week concluded that widespread use of mask could push COVID-19 transmission down to controllable levels and prevent further waves of the disease.

One group of researchers said that if 80% of the population wore masks and combined that with effective social distancing and hand hygiene, the number of coronavirus cases would plummet.

In its survey, MLive found:

Below is an interactive map showing the 37 stores surveyed, with color-coded dots showing level of compliance. You can click on a dot to see underlying details.

(The map includes six stores each in Kent and Kalamazoo counties; five in Livingston County; three each in Wayne, Oakland, Washtenaw and Jackson counties; two each in metro Lansing and Saginaw County; and one each in Genesee, Calhoun, Allegan and Barry counties. You can use the plus sign to enlarge the map.)

Keep in mind this was an unscientific, informal count, and provides only a snapshot of what the journalist saw during that specific store visit.

In addition to five stores with 100% compliance (purple dots) and five stores with less than 50% (red dots), the MLive survey showed 12 additional stores exceeded the 80% compliance benchmark cited by researchers (blue dots); another 12 stores had at least two-thirds of people in the store wearing a mask (green dots), and three stores had less than two-thirds in the store but more than half wearing a mask (yellow dots).

Interestingly, trends tended to be fairly consistent within the same county even for stores serving different populations. For instance, stores in Washtenaw and Kalamazoo counties had high compliance regardless of whether they were located in an affluent or working-class community. And three stores in Jackson County that serve a cross-section of that county’s residents — Meijer, Target and Kroger on Wisner Avenue — all had relatively low compliance rates.

That shouldn’t be surprising because a driving factor in mask usage is community norms, said Abram Wagner, a research assistant professor in epidemiology at the University of Michigan.

Nadine Frisch and Michael Nurmi, who were shopping Tuesday evening at a Saginaw Kroger, say they see mask use dropping off in the Saginaw area. But they still think masks are important.

“Everybody says it’s a deadly virus and it’s more contagious,” said Frisch, 56. “Our rights are not being violated like everybody keeps thinking. So you have to put on a mask. China does it. Half the European counties do it as a habit.”

It’s irritating that some people take the public-health guidelines seriously and some do not, said Nurmi, 51.

“It’s annoying that if you’re following the rules and then you have other people that are downplaying (the pandemic), claiming it’s not real and they’re putting their personal inconvenience above everyone else’s welfare,” he said.

Kay Jungnitsch, 58, who was shopping Tuesday night at the Saginaw Walmart on Brockway Road, said she hates wearing a mask and thinks it’s unnecessary.

“It makes me break out. It gives me headaches and I’d just as soon not,” she said, adding she isn’t worried about coronavirus. “I have a strong immune system”

And life has lots of risks, she said. “You could get hit by a truck,” Jungnitsch said. “I think (the mask policy) is ridiculous. I think it’s time to stop.”

Carmen Gamsho, co-owner of Midtown Fresh Market in Kalamazoo’s Vine neighborhood, said his store encourages mask use and provides customers with a mask if they don’t have one. But it doesn’t mandate their use except for employees.

The latter group “are all aware that wearing it is for their safety. They’re all onboard,” he said. ”The No. 1 factor” is employee safety.

It’s important for customers to realize that sales clerks are especially vulnerable to catching COVID-19, which is why mask use is important, said Meegan Holland, spokeswoman for the Michigan Retailers Association

“Retailers are very worried for their employees,” Holland said. “They want to make sure their employees are safe. And you are exposed if you are a front-line worker in retail, if you are dealing with customers all day long.

“We just ask shoppers to respect that,” she said, noting that stores do offer services such as curbside pickup for those who don’t want to wear a mask.

Jackie Welsh, 62, of St. Charles, is among those who won’t go to stores that require a mask.

“Once in a while, I’ve kind of had people back off and shy away from me, and I thought, hey, that’s your prerogative,” Welsh said . “I don’t have any problem. If you do, then I guess you’re the one that needs to get away from me.”

In addition to washing hands regularly and not touching your face, officials recommend practicing social distancing, assuming anyone may be carrying the virus.

Health officials say you should be staying at least 6 feet away from others and working from home, if possible.

Use disinfecting wipes or disinfecting spray cleaners on frequently-touched surfaces in your home (door handles, faucets, countertops) and carry hand sanitizer with you when you go into places like stores.

Michigan Gov. Gretchen Whitmer has also issued an executive order requiring people to wear face coverings over their mouth and nose while inside enclosed, public spaces.

Is a second wave of coronavirus inevitable? Michigan nears ‘critical point’ to suppress another outbreak