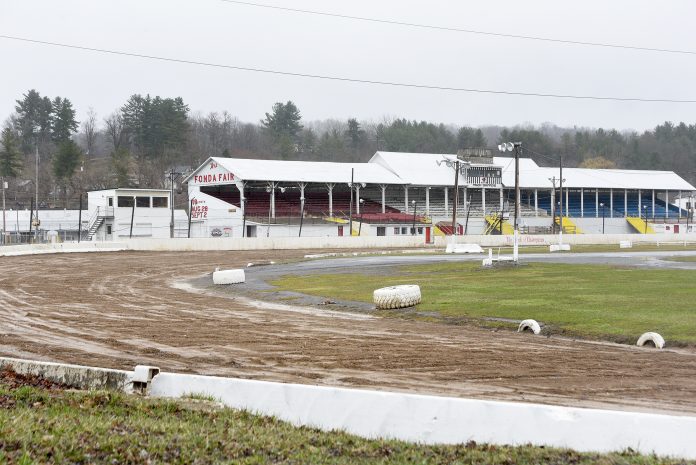 Looking back to last week, here are the results.

Friday night, Stewart Friesen was at the Michigan International Speedway with his No. 52 Toyota Tundra. Unfortunately, Friesen’s luck with the truck series did not get any better. An accident on lap 50 made for a short night. After a quick visit to the infield care center, Friesen was cleared and then he flew home and spent Saturday riding the lawn mower to help relieve some of his frustration.

Even with Friesen being in Michigan, his No. 44 Halmer modified was in the feature on Friday at Albany-Saratoga Speedway. Wife Jessica was driving it on this night.

The 35-lap modified feature was won by Matt DeLorenzo. This was his first win in over a year at the Malta oval. Marc Johnson finished second, followed by Danny Varin, Rocky Warner and Ronnie Johnson. Jessica did not have a great night, but she did hang on to keep Stewart’s car in the running for the end-of-year point title, with a 13th-place finish.

Tim Hartman Jr. won the 25-lap 602 sportsman feature. The victory tied him with his father Tim Hartman Sr. with 25 wins at The Great Race Place and places them in second on the all-time win list for that division.

It was another exciting night at Glen Ridge Motorsports Park. Everyone was waiting to see if there would finally be a two-time winner in the Red Chair DIRTcar 602 sportsman division. Amazingly, it did not happen on O’Connor Automotive and Oxbow Inn Night. Ryan Heath scored his first career win and became the ninth different driver in 2020 to grace victory lane. He was chased to the end by Andrew Buff, Tucker O’Connor, Joe Orlando and Travis Green.

The Northeast Paving & Sealcoat slingshot features were won by Brock Pinkerous in the all-star seniors, and Cole Conrad in the juniors.

Mimi-stock features were won by Wayne Russell Jr. in the single cam, and Ken Hollenbeck in the dual cam.

On Sunday, Devil’s Bowl Speedway held its Battle at the Bowl big block/small block challenge. The modifieds were scheduled to compete in a 50-lap, $7,500-to-win feature. At the end, it was Anthony Perrego, Erick Rudolph, Mat Williamson, Marc Johnson and Jimmy Phelps. The 25-lap big-block feature was won by Jessey Mueller over Williamson, Rudolph, Johnson and Perrego. The 25-lap small-block feature was won by Williamson over Rudolph, Stewart Friesen, Demetrios Drellos and Larry Wight.

Stewart Friesen was scheduled to be in Charlotte, North Carolina, on Thursday to practice for Sunday’s NASCAR truck series race at Daytona International Speedway. The race will take place on a road course using part of the famous tri-oval and part of the infield. This is taking the place instead of the annual visit to the Watkins Glen road course.

He was scheduled to be at Albany-Saratoga on Friday night, Saturday at Fonda and then on the road course in Florida.

In the 602 sportsman 25-lap feature, it was Tanner VanDoren taking the win. Hartman Jr. finished fourth.

Dodge City Speedway has been running two nights a week to accommodate its racers.

On Wednesday, the winners were Addisyn Roger (Jr. 1 gas), Frank Vignera Sr. (Jr. II advanced pro), John Askew (heavy flat head) and Vern LaForest (Sr. predator).
Fonda and Glen Ridge will race this weekend, but it will be with no fans in the stands. Pit gates will open at the regular times, with face masks required and social distancing in place.

This will be the annual championship night at Fonda, as its track champions will be crowned in all divisions. Glen Ridge will, hopefully, be able to continue with all of their scheduled race events.

A drive thru market on St. Pete Beach, the Indie Flea...

Few samples tested only in the name for formalin testing