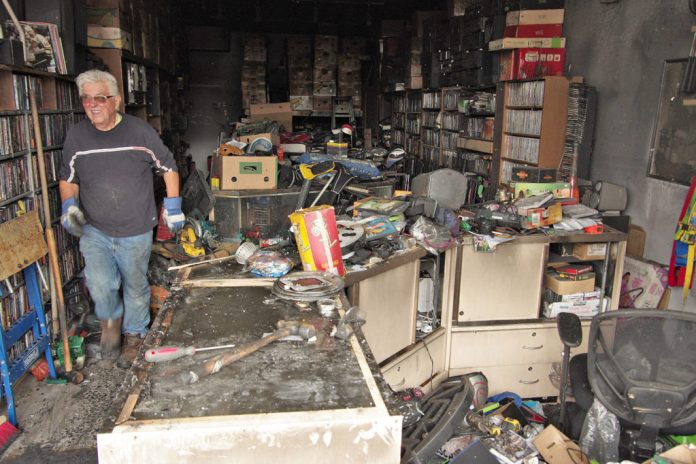 A Nanaimo shop owner is wondering what he could have done to cause someone to set fire to his store.

Bob March, owner of Previously Enjoyed, a second hand store on Townsite Road, said he was informed by the Nanaimo RCMP at about 6 a.m. Tuesday that his store had suffered a fire.

Nanaimo Fire Rescue responded to the address shortly after 4 a.m. to douse the blaze, which has been deemed suspicious.

March said security footage from a neighbouring store showed two people approach the front of the building and stand by the front door. After a few moments a flash is visible, apparently from fire, at the door’s mail slot.

Alan Millbank, Nanaimo Fire Rescue fire investigator, said in an e-mail that “the fire was intentionally set and was not accidental. It’s now an RCMP investigation.”

March has operated the store for about two years and said he’s careful not to take in items he suspects might be stolen.

“I try to be polite to everybody because I know it could piss them off and they could come back and throw a beer bottle through my window, but I don’t think I did anything to piss anybody off. I don’t want people bringing stolen stuff here,” March said.

He is not insured.

“We’re working closely with fire investigators and we are reviewing video surveillance, at this point.” O’Brien said. “There are two individuals of interest who were seen near the fire. We’re presently attempting to identify them.”

March, speaking to the News Bulletin as he swept up debris from the floor and sidewalk and loaded it into a compact pickup truck for disposal, said he was in the process of preparing to reopen the store, which he closed due to the COVID-19 pandemic.

“I’m an old man and this was a little hobby business and it was fun up until this morning…” he said. “Why somebody would do this to me, I don’t know.”

1 new case of COVID-19 confirmed in Luzerne County; no new...