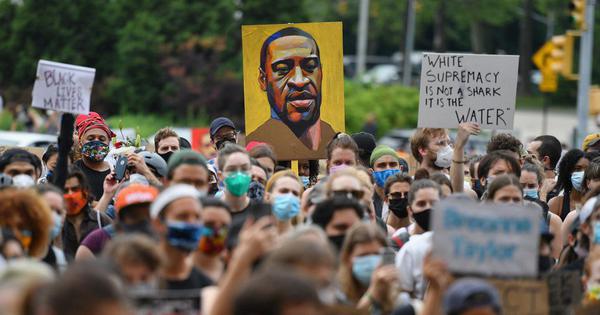 As protests continue to take place all over the United States following the police killing of George Floyd, a 46-year-old unarmed black man, Indian students on college campuses are grappling contrasting concerns: a desire to take part in the anti-racism protests that have spread all over the country and the world, fears that they might be targeted because of their skin colour, questions about hypocrisy over casteism and policy brutality in India and the worry that protesting might endanger their visas.

“I’m only watching and sloganeering with my hands in my pocket,” said Anand (name changed to protect identity), a PhD student at the University of Wisconsin-Madison. “If I get too close to the police, I make sure there is enough distance that I can outrun them, and I try to make sure I’m not in the place where the police are surrounding from all sides. It’s really scary.”

Protests broke out across the United States late in May when Floyd suffocated to death in Minneapolis after a white police officer Derek Chauvin kneeled on his neck for almost nine minutes despite repeated pleas from Floyd that he could not breathe. Chauvin has been charged with second-degree murder.

The initial demonstrations have now given way to a much more organised movement under the Black Lives Matter banner, which calls on the public and lawmakers to address systemic racism and police brutality.

Being a person of colour, Anand said, it is impossible for him to not go and show solidarity with the movement – mainly because it is connected to a much larger issue of police states across the world.

“When you protest the prison-industrial complex and the police state in the United States, you’re also protesting an entire system –which not only works in the US but also in Latin America,” Anand said. “Militarisation of the police is a big problem, and the US is at the centre of it. Police brutality in India is so bad. We don’t view it in the same light because we’ve grown up consuming content that valorises the police.”

In normal times, international students rarely worry about being involved in protests in the US. But the heavy-handed tactics of the police in parts of the country this time around has prompted many to be more wary.

Sandeep (name changed) has mostly restricted himself to the periphery of protests in Minneapolis. A PhD student at the University of Minnesota, the 28-year-old says he and other South Asian students haven’t been able to be in the thick of the crowd, “because in case the police come to arrest people, we have to escape first.”

“Everyone is watching out for cops, but you’ve to make sure, as a student and as a person of colour, that you’re nowhere in their way,” he said, adding: “you have to be more vigilant about when you have to get out. You can’t be there in a heated and charged moment.”

This awareness, Sandeep admits, isn’t constant. “When you’re part of a large crowd, in the middle of a march, you sometimes lose that sense,” he said.

Sandeep remembers losing this sense after witnessing a truck drive into a large crowd of protesters on a bridge in Minneapolis on May 31. “I was suddenly just furious,” he said. “Seeing a tanker drive at full speed on to a bridge swarming with people is a different kind of sight. There’s something very inhuman about it.”

Sandeep and a friend managed to climb across the bridge and reach the other side but when the police started coming, he says he “almost instinctively, and without realising that I’m a brown person here, started screaming at them”.

Sudhanshu Kaushik, a 25-year-old who started the Young India Foundation in 2015 and the North American Association of Indian Students in 2020, says he understands the desire to be a part of the movement. As an Indian-American who grew up witnessing and dealing with racism in Alabama, Kaushik said the videos have reminded him of inescapable facts about living in the US.

“There’s always a feeling that we’re immigrants here, that we’re people of colour – meaning we’re not truly American,” he says. There’s a different level of comfort that comes with being a white person and coming in with a chalkboard and talking about the importance of Black Lives Matter. Being a person of colour, there’s always a level of discomfort. “You’re more careful and constantly thinking about what happens next,” he said.

Kaushik, however, believes he enjoys a certain amount of privilege being an Indian-American who doesn’t have to fret about the risk of getting deported – a prominent fear among international students right now.

“Once curfew hits, and if you’re out there, which many have been, I think then there is a different level of comfort that a US citizen can have compared to an international student,” he said.

Some activists and organisers, Kaushik believes, are sweeping under the rug the ramifications that might come with getting arrested. “The fact is that students on visas can get deported if they are arrested,” he said.

To counter the misinformation on the subject, Kaushik has been helping educate international students about taking part in protests through the NAAIS Instagram page.

“We had been getting messages from students asking, ‘Hey, is it safe to go protest?’ Not necessarily because of it turning into a riot, but whether it was safe for them as international students on a visa to be out there,” he said.

“If you get arrested, or get charged with something other than protesting, that will stay in your file and you risk getting deported,” he said. “Students should be sensible about not putting themselves in the wrong situation or protest.”

When a late May protest on State Street in Madison turned violent, Anand said he felt highly vulnerable “being at such a scene given that I’m not an American”.

It was a sight he hadn’t seen before in his five years of being in the United states. “There was tear gas, the police were in full gear walking down State Street and securing areas starting from the Wisconsin State Capitol because they didn’t want the crowd to come close to the building,” he narrates.

Protestors then tried shaking an empty police car in an attempt to flip it. “Someone threw burning material – some kind of fuel – and the vehicle caught fire,” he added.

Being on a visa, and as a person of colour, he says it’s “incredibly risky” going to these protests. “Getting deported would be life-changing for me,” he added. “So it’s really scary being part of these demonstrations because arrests keep happening.”

For Vipulya Chari, a PhD student at the University of Wisconsin–Madison, it’s been more about vigilance rather than fear in this moment.

“The violent response of the police has been of concern,” she said. “We’ve seen tear gassing, smoke guns and that’s been more sanctioned because of curfew being imposed after 9.30 pm.”

Chari added: “I know for people on student visas, it’s a concern, but from what I’ve seen, people are so cognizant of that as well. I’ve heard of white allies explicitly saying they’d put their bodies in between people of colour and the police, making sure people get home safely.”

Fears, however, have not deterred South Asians from participating in protests against the killing of Floyd and police brutality in the United States.

Amid the risks of a pandemic coupled with that of deportation, Anand said he understands the caution being observed by several South Asians who are choosing not to physically show support. However, he believes there are many other ways of showing solidarity.

“If you have wealth, you can use that,” he said. “Having conversations with your family is also a form of protest where you’re challenging the conservative views. The real thing is, having some sense of critical reflection, just trying to find your blind spots. All of these are forms of protest.”

He added: “You do what you can, just don’t be a hypocrite.”

South Asians have particularly come under the scanner recently about their hypocrisy over support for the Black Lives Matter movement when racism is rampant within their own culture.

“Standing in solidarity with other disenfranchised/minority/systematically targeted communities is absolutely vital now more than ever,” writes Paroma Soni in The Swaddle. “But while it’s human to feel shaken by such horrific violence, the Indian reaction to George Floyd’s murder is tainted by hypocrisy and complicity. It calls into question our community’s violent history with both anti-Blackness and Western infatuation.”

According to Anand, the Indian diaspora is raising its voice because “their interests are tied with those of black Americans, and not because they truly care about oppression. Being obsessed with fairness and making fun of people who are dark-skinned, and not doing the cultural fight to accept what a South Asian body looks like is very hollow.”

Kaushik says that while calling out hypocrisy in South Asian culture is important, there’s also a need to limit focus on the particular outcomes we’re looking for from this movement.

“In this case: limitations on police funding and the demilitarisation of police are the quantitative outcomes that we expect as protestors when we’re coming out on the streets,” he said. “You should be trying to make a larger movement out of this, but is that the most effective way to go about it?”

Astrophysicists recoil from hints that the universe is lopsided