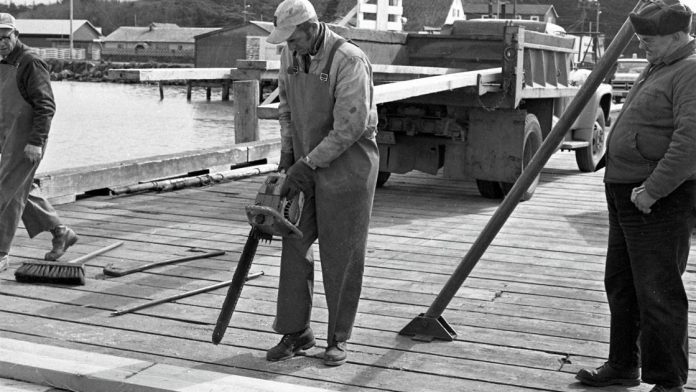 The first picture I am sharing today, taken in the early 1970s, shows Don Dodrill, a member of the City’s public works crew, repairing what was then known as the “City Dock,” at the north end of Chicago Avenue. The area is now all part of the Port of Bandon. In the far left, Bob Hiley can be seen walking out of the photo and Warren Symons, at right, watches the crew at work. In the background, to the left, you can see the Leep Memorial Hospital, and just over the top of the dump truck is the former Bandon Seafood building and the top story of what is now The Wheelhouse and The Crow’s Nest.

I was talking to Gina Swenson the other day and she happened to mention that she and her late husband, Dave, had arrived in Bandon 50 years ago in August. I decided to see if I could find the picture I took of her and Dave with Bob and Phyllis Ray, when they bought Ray’s Pharmacy in downtown Bandon in August of 1970. And here it is as the second photo this week.

The article pointed out that although the Rays had sold their business, which they opened in another downtown location 13 years earlier, they would continue to make their home on Ocean Drive.

The Rays had operated their pharmacy in two downtown locations; one where Winter River Books is now located and the other on the north side of Second Street where Lynn Davies and Jessica Markham own several businesses, east of Bandon Sweets and Treats.

At the time Swenson and his wife had four children, with their eldest daughter, Cynthia, 14, entering high school in the fall. The others were 12-year-old Tom, nine-year-old Susan and seven-year-old Jim. The family had lived in Stayton since 1967 where he worked at Ray’s Rexall Drug. Their first home in Bandon was the former Tom Gant home on west Ninth Street.

The third picture appeared on the front page of the May 2, 1957, Western World …. but it was not the lead picture, and that’s another story. What started out with the WW photographer preparing to validate the successful moving of the large feed warehouse at the Coquille Valley Dairy Co-op resulted in his being there when the building snapped the timbers as it was being moved across Ferry Creek to the other side of Grand Avenue, where it sits today.

This feed business was operated by the Coos-Curry Farmers Co-op, which was managed by Kenner Giles, but because the cheese factory planned to expand, they needed the building to be moved. When the west side of the building was out on the timbers crossing the creek, the big sticks snapped and the south end of the structure fell into the creek.

Later it took the big wrecker from Art Aldropp’s Garage in Langlois to help lift the fallen end of the building so it could be shored up again.

Today, more than 60 years later, it is the marketplace building that is just east of Face Rock Creamery.

The lead article in the same issue of Western World told the tragic story of fire destroying the Langlois Cheese Factory, home of the famous Blue Vein cheese, sold across the country.

H.H. Hansen, owner of the plant, found the boiler room filled with smoke and flames coming from the vicinity of the butane gas igniter installation. Coos Forest Protective Association brought a truck from Coos Bay, and some Port Orford firemen brought a pickup with portable gear, but none was in time to prevent the entire facility from burning to the ground. Records and office equipment had been removed previously by a large group of people, including loggers, truckers, housewives, merchants and others from the Langlois community, as well as some from Bandon and Port Orford.

The article explained that a month later CFPA would have had a truck at its Four Mile headquarters, and they might have been able to save it.

The latest information from Coos Health and Wellness, which came out June 26, about the number of Covid-19 cases in Coos County showed 35 (+1) positive; 5, presumptive; one, hospitalized; 0 deaths, and 2,696 people tested.

Some areas of the state have seen large increases in the number of cases, including Union County.

Because of the rising number of cases, particularly among younger people, both Texas and Florida have ordered bars to close and reduced restaurant capacity. Arizona hospitals are overwhelmed with Covid patients.

In Oregon, seven counties (Marion, Polk, Lincoln, Hood River, Washington, Multnomah and Clackamas) have been told by the Governor that people must wear masks in indoor businesses and public spaces, and people are encouraged to wear them in the other counties, but there is virtually no way to enforce it.

The press release from the governor’s office explained that in those seven counties, it is up to each county to decide how to implement the new rules. Businesses in those counties are also required to provide masks to the public.

My fear is that if people do not wear masks and practice social distancing, the governor may move counties like ours back into Phase one, which could again close bars and restaurants (for indoor seating) and businesses like barber shops and hair salons.

No matter how you feel about the wearing of masks, they have been shown to cut down on the spread of the virus, which seems to be a small price to pay to eventually find our way back to some sense of normal.

Several weeks ago, a letter was sent out to patients of Dr. Babak Baharloo, DPM, to let them know that the podiatrist was no longer a provider at Southern Coos Hospital and Health Center.

Eugene Suksi, CEO, explained that as with all healthcare systems across the country, “we are experiencing significant decreases in volume and revenue due to the COVID-19 Pandemic and economic conditions were certainly a factor in the decision to end Dr. Baharloo’s employment.

“On a positive note, Dr. Baharloo has informed me of his intent to open his own office in Bandon,” said Suksi, who provided contact information. His new office is located in Suite 10 at 780 2nd Street SE., the building east of Face Rock Creamery, which includes a doctor’s office and a real estate office, as well as other businesses. His phone number is 971-247-1080.

Suksi also pointed out that Robin Summers, RN, would continue to be available for nail trimmings.

“We will be available to continue with your wound care by working closely with your primary care provider. If you do not have one, we will continue wound care with the help of our clinic providers, Dr. Olixa Adams and Debra Guzman, FNP,” said Suksi.

I have learned that Tom Goss is the new commander of the VFW Frank C. High Medal of Honor Post 3440, Bandon, as Royce Kelley has stepped down because of health reasons. Preston Waite will be the new quartermaster, who replaces Joe Adair, who has also stepped down because of health reasons. Other officers are Alex Alexander, senior vice commander; Ray Davasher, junior vice commander; Gary Scorby, chaplain; first, second and third trustees, Bill Smith, Jens Anderson and Joe Adair.

Since most Fourth of July activities have been canceled, the VFW is urging people to decorate their trucks, cars, motorcycles or whatever, meet at the VFW Hall on the Fourth (Saturday) at noon, and then parade through town for an hour or so. All are welcome to join them.