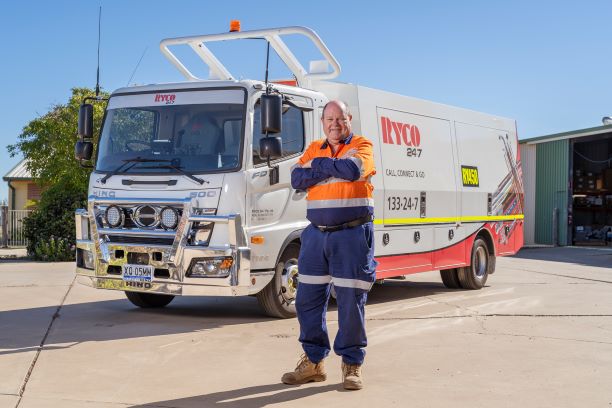 RYCO 24•7 runs a fleet of Hinos as part of the emergency breakdown services and parts it offers the coal sector of Central Queensland where trucks are tested in the most rugged of conditions.

German explorer Ludwig Leichardt made mention of visible coal deposits in the area now known as Blackwater while travelling through on an expedition as far back as 1844. It wasn’t until the late 1960s, however, when a mining company from Utah established a base that the township found its feet.

Miners have been setting up camp here ever since. The appreciable seam of coal running through Queensland’s Central Highlands makes Blackwater, at least by default, the state’s coal capital.

The resource rich region generates up to $190 million every day mostly in high quality thermal coal which is hauled to port in Gladstone and shipped overseas, usually bound for Asia where it powers high efficient, low emissions coal-fired power plants.

RYCO 24•7, a heavy equipment parts and breakdown service runs a small fleet of commercial vehicles around the clock to replace hoses and other parts on bulldozers, long haul trucks, cranes, excavators, drag lines and diggers. This includes support, installation and aftermarket business.

The Hino 500 Series Standard Cab, of which it has recently taken delivery of five new FD1124s, are asked to cover immense terrain on the cluster of coal mines, some of which are 60 kilometres long, in an environment about as harsh, dry and dusty as anywhere on earth.

That means, for its fleet investment, there’s a natural aversion to any hint of impermanency given the business must not only be reliable and on time, but its customers, of which BHP is one, cannot have any disruptions further compounded by the errors of its service provider. So they don’t make any when it comes to purchasing commercial vehicles.

Even in a year as aberrant as 2020, the industry hasn’t stopped according to RYCO 24•7 Business Manager Wesley Bulters.

“Construction and mining have not missed a beat. What that means for us is the machinery is all still going. In turn it needs maintenance and servicing to keep it operating at an optimal level,” he says. “While that remains the case, our business will keep moving ahead.”

The Executive Team, according to Wesley, did not hesitate to purchase its latest ten trucks through Orix and Sci Fleet Hino. After all it had the runs on the board. Many of its older fleet have been running, without issue since 2008, clocking up in some instances 500,000 kilometres on rutted, rocky mine sites every day of the year.

“The trucks take constant punishment over rocks, craters and unsealed roads,” Wesley says. “They get hammered on site. The Executive Team approved the decision to purchase ten 11-tonne rated Hino 500 Series FD1124s, a bigger truck in this instance knowing the durability of these vehicles is proven.”
Drivers are inducted to operate on site, above ground. The job takes them into the pit, a 25 kilometre journey in itself, where in regard to the equipment it’s a case of, “get under, get it fixed, get out,” as Wesley puts it.

The jarring heat, especially between November and January, sees air temperatures regularly reach 43’c. Breeze in the pits is scarce. Working on or under the belly of a bulldozer is even hotter where things melt together more fiercely from radiant heat approaching 60’c. It’s so hot it takes little more than a summer for the white stickers on the trucks to turn brown and blister.

The Hino 500 Series FD1124 is nine metres in length, three metres high, with a purpose-built body that accommodates its core function as a mobile parts and service shop.

Wayne Watt Central Queensland Operations Manager confirms another five Hinos are currently being built with provision for two more to be delivered by the end of the next financial year.

“They handle the rough roads well. We’ve been through a few suspensions over time which is to be expected given the loads that we carry in the back of the truck. Having said that we’ve run for over 250,000 kms before we’ve had to do anything about the suspension,” he says. “You can’t fault that side of it.”

Aside from replacing the electrical connectors on the injectors and having the suspension reinforced with an additional parabolic leaf spring to mitigate drop and for extra flex on every truck, the vehicles have not required any major repairs.

Scheduled services are always honoured. None of the clutches have had to be replaced. The front axle stabiliser, a feature on the new Hino 500 Series, helps with the constant jounce.

“We’ve had a really good performance out of them and they handle the environment extremely well,” Wayne says.

That same environment involves immense journeys, most of it off-highway, in which the vehicles may have to deliver parts across multiple sites. Of the older fleet, one of the Hinos has amassed more than 500,000 kilometres in little more than a decade.

It wasn’t until it hit the 400,000 kilometre mark that it even hinted at having any serious maintenance.

These are vehicles that are flogged until the point of collapse. And yet, somehow they don’t.

“I’ve driven some of the opposition trucks before and I’ve had a better ride in the Hino and the other trucks weren’t even around the 100,000 km mark yet,” says Wayne. “The design of the cabin helps, and the seats are even better. In the new truck a noticeable attention to detail and comfort has gone into it. Out here your body gets a work over.”

A fully air-suspended and adjustable ISRI 6860/875 NTS2 series seat can be configured to the body type of the driver, with class leading backrest and lumbar support. As the unsealed roads are ridden with corrugations, they can be hard on the driver’s posture and back.

The trucks, according to Wayne, need to absorb as much of the impact as possible — so that the driver doesn’t.

“Hino has done a lot of work, as far as I can see it, on improving the rideability as far as they possibly can,” he says.
One of the trucks operates 24/7 while the others are running 12 hours a day. Wayne will swap them out to balance out the mileage among the fleet.
“We want to even it out on the new fleet to maximise the life we get out of them. But if we can get another ten or 12 years out of our new trucks, we’ll be happy.”

As some of the pits have steep grades, the drivers need to ensure ingress is achieved without issue. A missed gear in searing temperatures can have adverse cumulative effects on the engine. Any delay, as a result, might hold up the huge CAT coal haulers.

The auto gearbox on the new trucks naturally helps with handling when it comes to changing down gears on a dusty incline in the dark having already covered over 600 kilometres during a night shift.

“We need reliability for that sort of operation,” Wayne says. “The last thing you need is for your truck to break down in the middle of the night. They do get worked hard.”
Wayne, who works from Emerald, has been working for RYCO 24•7 the last 12 years. He was a driver before being appointed to his new role late last year.
“The drivers either come to me with a complaint or a success story. I can relate to it because I’ve been there,” he says.

The only drawback for Wayne, when working trucks like these in such a merciless environment, is having to wipe the ABS sensors regularly given the constant buildup of grit which can trigger the fault warning light.

“In terms of the payback for the costs we couldn’t have asked for more,” he says. “The trucks pretty much have paid for themselves and some over the years.”

The company will keep a couple of the original fleet going to use as a town truck foreseeing that these workhorses will have at least another 18 months in them.

“The guys put the key in and they start first time, every time,” he says.

Wesley, who has grown up in the industry, says the year, to date, despite the uncommon situation globally, has been one of growth for RYCO 24•7.

“We’ve been able to invest in new equipment as part of our ongoing commitment to our customers and our people,” he says.

“It’s important that we keep them happy. Our HR team have done very well in terms of updating us in what we need to do coming back to work, complying with regulations, getting in our trucks and going out and servicing the sites. They’re constantly updating us in regard to any new policy coming through. They have been right on top of it.”

Having started out sweeping floors in one of the retail outlets owned by his parents in the Blue Mountains, Wesley, who works from Brisbane, has worked as a fitter, driven trucks and is now responsible for onboarding all new RYCO 24•7 service centres in the national network including Blackwater and Emerald, where Wayne is based.

His 24 years of experience has come from the ground up. If talent, no matter the industry, is to be nurtured, it’s first of all, a matter of mining it.