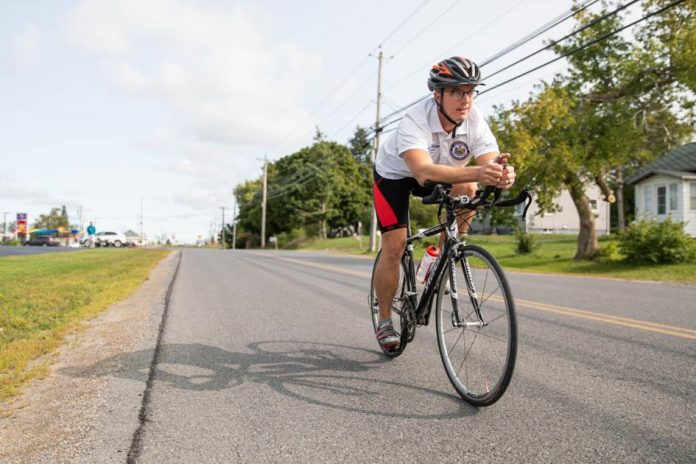 WATERTOWN — In an effort to raise money for his re-election campaign, Assemblyman Mark C. Walczyk, R-Watertown, on Wednesday will be biking all the way across the 116th Assembly District.

“We were thinking about different, creative ways to raise money, and I was looking at the map at one point and wondered how long it would be to bike across this Assembly district,” Mr. Walczyk said. “Coincidentally, it’s almost exactly 116 miles across the district.”

He said this year’s campaigning process has been abnormal, predictably because of the ongoing concerns surrounding the COVID-19 pandemic. Normally, the assemblyman said he would be knocking on doors, meeting voters and hosting campaign events to raise donations, but this year those activities can’t happen.

This bike ride came about as a socially distant event that could be used to raise donations, but also to get in touch with voters.

“I never would have thought about something like this unless we were forced to think of new, socially distant and interesting ways to raise money,” Mr. Walczyk said.

Mr. Walczyk will livestream the entire ride on Facebook. A Runningboards Marketing truck with screens on three sides will drive ahead of him with the livestream playing on the back screen so he can watch the feed and read the comments while biking. He will also have a microphone in his helmet so he can speak to viewers and respond to comments.

“That will allow me to communicate directly with anybody who’s tapping into the livestream, which to me is just super cool,” Mr. Walczyk said.

For $116, donors can sponsor one mile of the assemblyman’s ride. Mr. Walczyk said as of Monday, every mile is sponsored. Mr. Walczyk raised $13,456 for his campaign from mile sponsorships alone. He said the campaign was also able to secure some corporate sponsors, adding even more money to their total. Sponsors’ names will be shown on the sides of the Runningboards truck, and a few local unions have also paid to have their names included on Mr. Walczyk’s biking gear.

Mr. Walczyk said this will be the longest ride he’s ever done. In order to prepare, he’s been biking long distances on weekends and after work.

Mr. Walczyk said he’s been biking since he first learned to ride in elementary school, but began showing interest in doing more than just riding around the neighborhood in middle school.

“I used to bike from my parents’ house to my grandparents’ house,” he said. “It was four-and-a-half miles, and I would time myself every single time to see if I could do it faster than the last time. I think that’s when it started.”

In high school, he did his first triathlon in Henderson Harbor, which is when he said he fell in love with competitive bike racing.

Since then, Mr. Walczyk has competed in four Ironman triathlons, which consist of a 2.4-mile swim, a 112-mile bike ride and a 26.2-mile run.

He said Wednesday’s ride, weather permitting, should take him roughly eight hours, including time for a brief break to eat and refuel the truck.

“If we get wind out of the east or out of the north, it’s going to be a really long day for me,” Mr. Walczyk said. “If the wind sticks to prevailing out of the west, I should be good.”